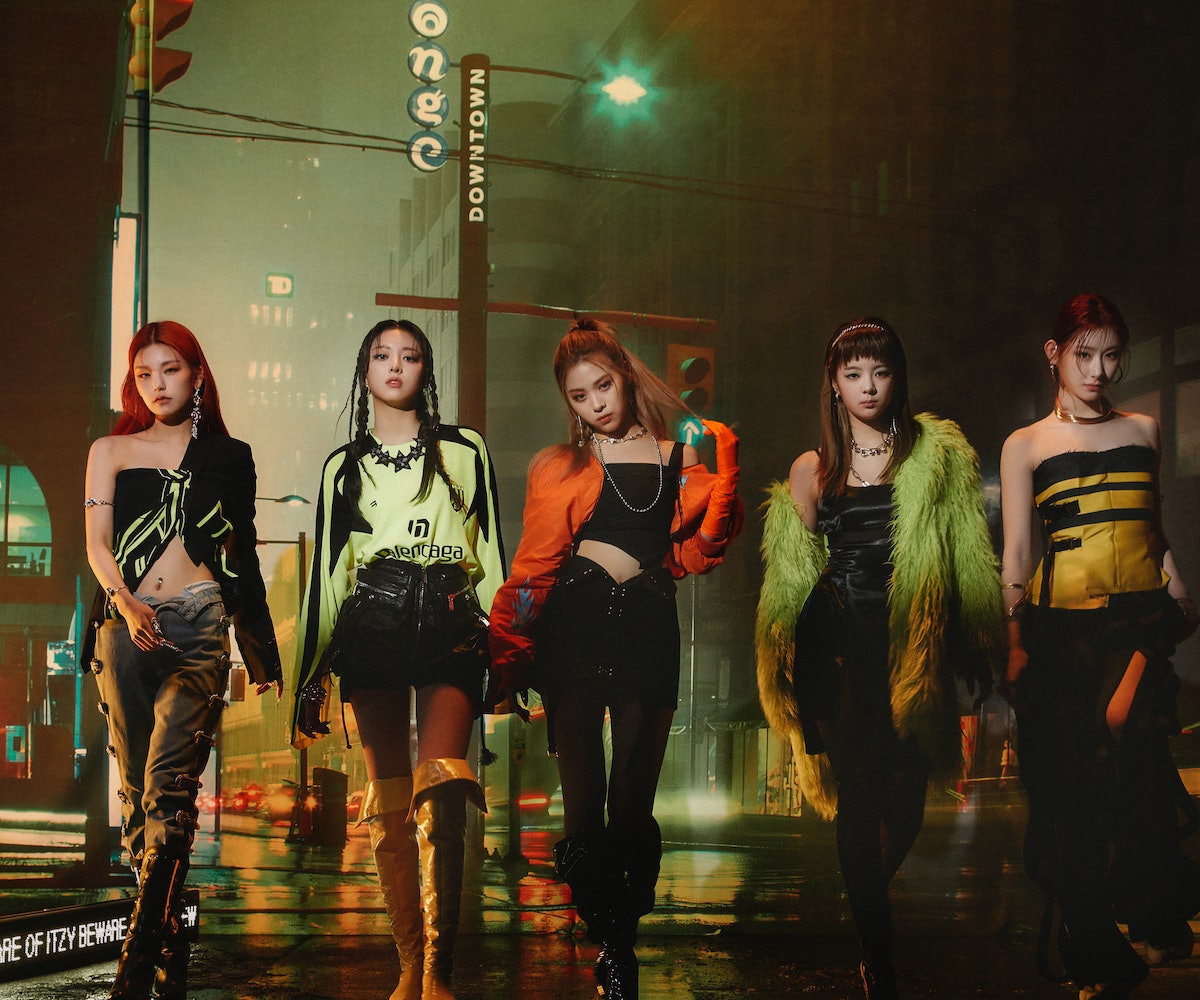 Even the members of ITZY were surprised by the powerful and trap-inflected direction of their latest single, "마.피.아 In the Morning," from their new mini album, Guess Who. "We thought it was really unique for a K-pop girl group," says Ryujin, the charismatic performer who tearily turned 20 last week. She tells NYLON over Zoom that both the song and its hard-hitting performance show off the team's "foxy and sassy" sides. "I like that," she says, smiling.

In the crowded Korean pop music landscape, being different is the key to success, and the global demand for ITZY has never been higher. ITZY's Yeji, Lia, Ryujin, Chaeryeong, and Yuna have been confidently strutting to the beat of their own bedazzled drum since 2019, when they burst onto the scene with the anthemic earworm "Dalla Dalla," meaning "different" in Korean. At the time, the colorful visual became the fastest K-pop debut music video to reach 100 million views on YouTube. Last year's viral hit "Wannabe" championed their individuality. "I don't wanna be somebody," they sing. "Just wanna be me."

Out now, Guess Who taps into this signature ethos, but it also propels them forward into uncharted territory. "Shoot!" finds ITZY flirting with Latin trap, while "Tennis (0:0)" is refreshing acoustic pop. True to their name — a play on the Korean words “to have it all” — ITZY refuses to be defined by one sound. They're both confident and vulnerable, dangerous and dexterous, and now they're ready to show the full spectrum of their charms.

Below, NYLON caught up with ITZY to discuss Guess Who, trying new things, learning from challenges, and the struggle of outdoing themselves with every comeback.

When I listened to "마.피.아 In the Morning" for the first time, I was really surprised. It's a new sound for ITZY. Did it feel different for you as well?

Lia: I wouldn't say it's totally different, but, yeah, we tried to show another side of us. We're glad that you were surprised because that's one of the reactions we want our fans to have when they listen to our music. We've all kind of grown, and our concept got a little more dark and intense. The performance is way more complex. There's a lot more to it.

What are some of the emotions you're trying to convey with "마.피.아 In the Morning"?

Ryujin: For "마.피.아 In the Morning," the mafia doesn't mean the real mafia in Italy. [Laughs.] It's about the party game Mafia in Korea. So we are portraying the mafia role in this song. We're concealing ourselves in the morning but taking someone's heart in the night. We wanted to show the two sides of us. Also, we're being a little foxy and sassy, and I like that.

What can you tell me about the performance? I feel like your choreography gets more difficult with every comeback.

Lia: I guess it became our thing. Performance is definitely something that we can't take out of ITZY, and it's something that our fans expect from us. That's one of the things we really work hard on when we get ready for a comeback. So for "마.피.아 In the Morning," our performance is quite difficult. We would say that it's the most difficult [choreography] we've done, but that's what we say every time! Because as you said, we always come back with something even harder.

Yeji, do you feel pressure to come back with something even more spectacular and something that pushes the boundaries of dance and performance even further? Does it feel like you have to outdo yourself every time?

Yeji: I do worry every time we come back. It's like, How can I show my performance? How can I make it better? Our fans give us a lot of love, so I really want to give that love back with an awesome performance. That's why I prepare a lot, and I'm always thinking of them as I practice.

Ryujin, you described "마.피.아 In the Morning" as a little foxy and sassy. Who do you think best embodies the spirit of the song?

Ryujin: Lia! I didn't really think she could at first, but she was really good at it. I didn't expect that from her because she's so cute — she has a cute face, and her emotions are really cute. So I didn't expect a foxy vibe or a sexy vibe or a scary vibe from her, but it came out of her. I was really surprised while we were filming the music video.

Fans really freaked out over the teaser photos. The styling is a little edgier. There are body piercings. Lia, you have bangs! Those were clip-ins, right?

Lia: Yeah, definitely, those were clip-ins. I had so much fun shooting the concept photos because I actually wanted to try bangs. But I saw the [fan] reactions. Some people liked it, some thought it was nice — and some thought it wasn't. I'm glad I tried it, because I had lots of fun. It was a look I had never tried before.

“We want to spread bright, good energy. A healthy energy.”

Do you look at comments a lot?

Lia: Yeah, we do, because we're curious!

Ryujin: "What do people think of this?"

Lia: The reactions are fun, too. We prepare a lot for our comebacks, so we really want to know how people react to it. Do they like it? Do they think it's nice? But we don't really get affected by it or think too deeply about it. We just look at comments for fun.

Confidence is a major theme for your music and performance. Do you think it's the most essential component of an ITZY song?

Ryujin: That message was a very big part of our music until now, but if we include this album, then I think the performance is the defining trait of ITZY.

Lia: Confidence is the message, but the thing we always want to be known for is energy. We want to spread bright, good energy. A healthy energy.

On "Sorry Not Sorry," you sing, "ITZY no limit." I think that's a good way to describe you. What does it mean for ITZY to be limitless?

Yeji: I want us to keep challenging ourselves, and facing challenges is the key to having no limits.

Ryujin: This album was a challenge.

Chaeryeong: When I was preparing for this album, I was a little bit scared and worried because it was very new for me.

Ryujin: And the single was really unique. It wasn't like what other girl groups release, so we were a little bit worried about if we could do this song well. But I think we did it. And the performance fits us really well. I'm less worried now.

What do you do when you're not feeling particularly confident?

Ryujin: She has a lot of confidence and she gives it to other people. She has really great energy and a big heart for other people, especially our members.

Lia: Yuna says nice things to us whenever we're down or upset. That gives us confidence.

Yuna: I feel a lot better when I express my feelings. Even if I'm not sure, I try to make something positive. It makes me feel positive, like things are going to work out and be OK.

When I mentioned "Sorry Not Sorry," you all cheered. Is that your favorite song on the album?

Ryujin: We all like "Sorry Not Sorry." I think my favorite is "Tennis." It's something we haven't tried before. It's softer, so I was a little worried, but it turned out great.

Lia: "Sorry Not Sorry" is an amazing song. We were kind of upset that it was a B-side track.

Lia: We thought it was really good. It has a really nice melody, and it's upbeat and it's full of energy.

Yuna: The ending is really perfect. It's amazing.

[Everyone starts singing the lyric "we go up higher"]

It's been a little over two years since ITZY debuted. How would you say you've grown in that time, both as people and as a group?

Yuna: We've endured a lot of challenges together, and I think that made us grow up a lot. It made us feel like we can try anything, any concept. As for myself, when I debuted, I was just 15 years old. I was a little girl. Now I'm mature. [Laughs.] I just look more mature. The thing is I've grown up in a positive way because of ITZY's members.

Chaeryeong: Personally, I think two years is not that long. I don't think I've grown up fully. I'm still learning and I'm still improving. I'm really excited for my next step.

Yeji: I thought I knew myself well, but I found out that my fans and my members are letting me know who I am. They make me improve myself so that I can show more. I'm a better person because of them.

Lia: Although we've been close since our trainee days, since living together and becoming ITZY, it's like we've become actual family. We're like sisters. We don't have to say things to each other to know how we're feeling. It's really hard to describe. But we have something special.

Ryujin: Before I was on the debut team with the members, I never really tried to get along with people. But when you're on a team, you can't choose who you're going to debut with. So I learned how to work with others and how to match others. I matured in that sense by being part of a team. Also, as a team, we have more emotions that we want to express through our music. And this album shows it very directly. So please love our songs!