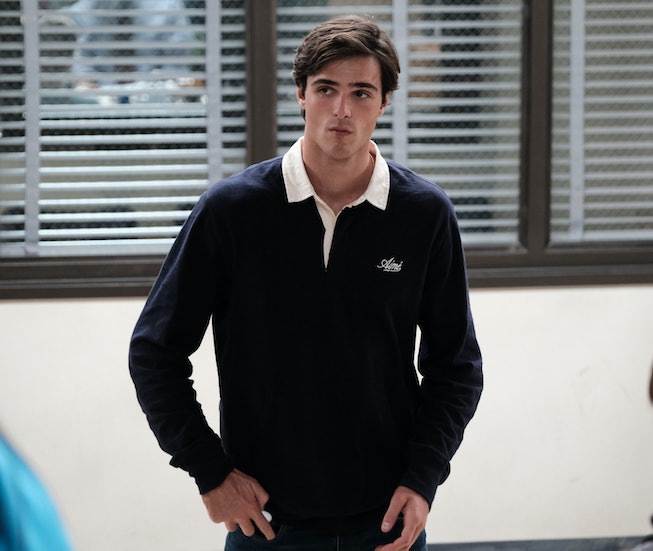 Nate Jacobs is the Euphoria character that everyone loves to hate. Portrayed (sometimes a little too well) by Australian actor Jacob Elordi, the handsome teenager is brutish, cruel, conniving, and at times downright terrifying. He’s like a walking jumpscare, and according to Elordi, getting in the mindset to play such a complex role took a lot of preparation.

In an interview with GQ, Elordi revealed that he studied the mindset of TikTok gym-bros and sharks to cultivate Nate’s unnerving persona. The 25-year-old actor said he visited a popular Los Angeles gym to observe how the men behaved. According to Elordi, their interests included listening to Pop Smoke, lifting weights, and flirting with women. After unpacking what hyper-masculine men enjoy doing, he dove into their psyche — drawing inspiration from sharks and their predatory behavior. “Nate is always watching,” Elordi explained, comparing his character to the sea creature. “He’ll bump into someone in the hallway, like a shark when they test someone’s leg — and then he comes up from the deep and just f*cking annihilates them.”

Elordi was able to take his findings and infuse them into Nate’s character, crafting a complex character that’s held viewers' attention for three years. For the uninitiated Nate Jacobs is Euphoria’s wild card. He’s a stereotypical jock with anger issues, absent parents, a toxic on-again-off-again relationship with his girlfriend, Maddy, a violent streak, and a faulty (at best) moral compass. “That kid is in the ocean and there’s a storm and he has no sail, he has no idea,” Elordi said. “He has no rule book to follow of the kind of person that he should be.”

Many of Elordi’s scenes on Euphoria are emotionally taxing and difficult to watch, which the actor credits to their long shoot days. “What everyone’s seeing on television, the shorts that people are talking about, the feelings that they get, the conversation that’s around the show, that’s because certain shots take 30-something takes,” he explained.

Despite what sounds like a grueling workday, Elordi says he loves being on set. “For me, working on that said is an absolute treat,” he said. “When I’m working with Sam, I’m in the trenches with him, and I trust him, and I work myself to the bone for him. I think I’ve read people saying, ‘Look, that’s a bad image to set, you shouldn’t have to work yourself to the bone for art,’ F*ck that. I enjoy it.”

The last time we saw Nate was in the finale of season two when he confronted his father and turned him into the police. Fans of the show will have to wait for quite some time to see the aftermath of his actions, as season three does not have a release date. Until then, Elordi has more projects in the works. Up next is a thriller called Saltburn, which he stars in alongside Rosamund Pike.