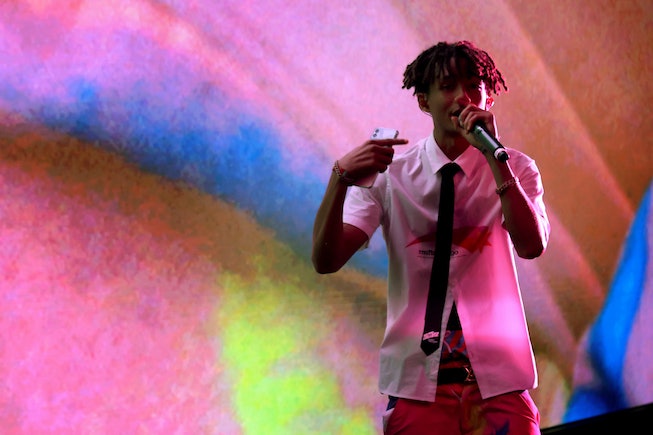 Jaden Smith is a futuristic thinker. The rapper, actor and philanthropist is known for his original observations as much as his style and music, so it makes sense that he’d partner with Samsung 837, a cultural space known for its integration of technology, community and the arts.

On Monday, June 13th, Smith performed at 837, playing for an intimate crowd the original set list that was planned for his Madison Square Garden appearance as part of the Justice World Tour with Justin Bieber.

Ahead of the performance, NYLON caught up with Smith to chat more about the performance, connecting with fans post-quarantine and how his 2020 album, CTV3: Day Tripper’s Edition holds up two years later.

How did your collaboration with Samsung come about?

I think that it's really important for me to kind of give my fans a backstage look at what's going on in my life. My whole Samsung partnership started to come around right before I started to go on tour, because I really wanted to be able to reconnect with people after the pandemic. So many people were just inside, not being able to go outside, not being able to be connected, and I felt kind of disconnected from my fans. So being able to use the Samsung products to be able to stay in communication with my family when I'm on road, being able to stay in communication with the fans and give them exclusive content and exclusive experiences of what we're doing today in New York, it just, it warms my heart.

And that's the whole reason why we'll partner with somebody, so that I can really go on to help the world and kind of create community, because I also feel like me and Samsung are very aligned on sustainability, which is something that I always look for first when I'm thinking about partnering with somebody. So that was a very clear connection there.

But it was the community that really got me to be so involved and so excited about it because what we're doing right now is something that I've never really done before. And I feel like it's something I want to do a lot more of in the future. It just felt like a genuine partnership ,because we all wanted to do the same things.

What’s it been like to be back performing after all this time of not being able to?

It's been really crazy, and it's been so different, because it's been such a long time since it's happened, but I feel so happy to be back on tour and being able to perform in front of people and to be able to do stuff like what we're doing tonight. It's about performing, but it's also about spending time with people and talking to them, and for Samsung to be able to provide this space and these products for us to talk about and for us to communicate with each other with. It's really been an awesome experience doing this, but I'm definitely glad to be back in front of people and to be throwing events like this, because it's been a really long time.

What are some of those moments you’ve had with your fans?

An amazing moment that I've had with some people that are in the Msfts community have been just right now, right before I got on the phone, I went upstairs and they're all here right now. They're all in an amazing little Samsung Jaden section where they can watch the show and hang out and they have all these products to look at. It's just a cool chill vibe that I would never usually be able to do with them, I would usually just throw a Msfts meet up outside or something. But to be able to actually do it inside with the help of Samsung is a huge, it's just a blessing. And it makes me so happy, because any excuse that I can have to connect with my community, I will always take that. And for being able to build this out in such a structured way with Samsung, it's just been so fun.

And performing CTV3 two years after it came out, how has your relationship with the music changed?

It's really crazy actually, because I made it during the pandemic and I never got to perform it. So it really is insane to actually get out on stage and perform it and for people to know the lyrics or to want me to perform other songs or want me to be like, "Hey, we want more of this album." It's really cool to me, because I didn't get to go out into the world and really present the album to them because of when it came out. But I felt like it was the type of album where it was okay and it could be digested completely by yourself. It wasn't a party album. But it feels so good to be able to get people's opinions on it now that I'm out in the world. And the fact that people want see me perform it makes me happy and it makes me just perform more and more songs off of the album almost every time I go on stage.

NEXT UP
Entertainment
NCT Teams Up With Sanrio For Their Next Merch Launch
Entertainment
Hunjiya Strives For Better Communication On "Talk2Me!" & "Favorite"
Entertainment
BTS' Break Is A Necessary Step For The Group
Entertainment
Lorde Calls Bad 'Solar Power' Reviews "Painful"