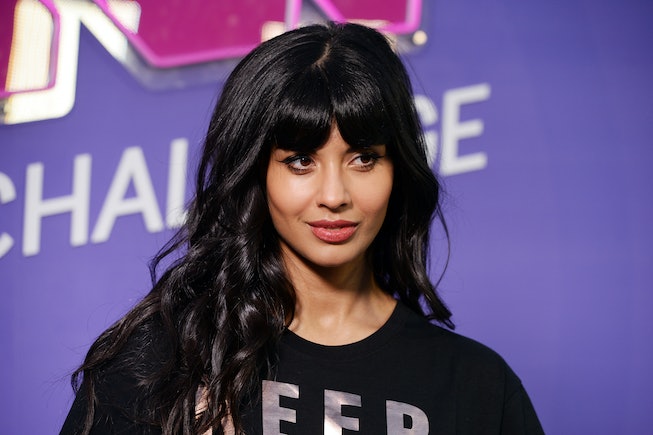 Since blowing up in 2016 thanks to her principal role as The Good Place's pampered British socialite Tahani Al-Jamil, Jameela Jamil has made a habit of using her now-massive platform to do what she thinks is necessary work to promote body positivity. In the past, this work has included taking regular shots at celebrities that promote unrealistic body standards and coming for influencers that make a living by selling (potentially dangerous products) like 'detox' teas. (Often, Jamil's critiques are accompanied by personal anecdotes about her own past struggles with body image issues and eating disorders). Of course, one of the chief targets of her criticism has always been the Kardashian Klan — they of Flat Tummy Tea Millions. But now, the actress, who is currently serving as one of the hosts of HBO Max's Legendary, has apparently decided to end her years-long crusade against the Patron Saints of Calabasas.

It all started last week when Kim Kardashian posted a throwback video of herself posing in the custom corset made for her to wear with her custom Thierry Mugler gown for last year's Met Gala. According to Jamil, the post, which shows Kardashian showing off her impossibly cinched waist, prompted fans of Jamil's to send "over 1000 DMs" asking that she address it — as if it is her personal responsibility to address every single Kardashian beauty and fashion post. Though Jamil's responding post seems to suggest that she is done coming after the Kardashians, it's clear that she isn't doing so because she has realized that attacking other women is wrong, but rather because...she thinks her work is done?

"The reason I didn’t jump on it immediately isn’t because I don’t think the post was damaging and disappointing. I do," The Good Place actress said. "It’s because the fact that you’re all messaging me about it, shows my work is done. I haven't been trying to cancel Kim K. I was always trying to arm YOU with the knowledge to recognize for YOURSELVES that this is a bullshit expectation of women, developed by the patriarchy. If YOU know that it’s problematic, reductive and irresponsible for her to perpetuate such a heavily impossible beauty standard to her impressionable fans... then you’re empowered and conscious and don’t need me."

Of course, the post wouldn't truly be a Jamil post without still passing critical judgment on the very woman she was seemingly agreeing to stop judging. "Kim, like many of us, has had decades of body image issues and obsession," the current Mrs. James Blake continued. "She isn’t actively trying to harm you. She’s just so harmed and deluded into thinking this is what SHE needs to look like to be special and beautiful and she’s spilling it out onto her following."

Then, after saying that what Kim is doing is "wrong," Jamil said, "So there’s no point in screaming at her. The smart thing to do is to protect YOURSELF. YOU have the power. YOU control every Market. YOU choose what and who is trendy. Unfollow the people who tell you things that hurt your self esteem. Don’t let the debris of their damage spill out onto you. Unfollow people/brands that don’t make you feel powerful and happy and grateful for what you have. You’re the boss and none of them are shit without you."

In the end, after telling her followers to "BLOCK. MUTE. DELETE. REPEAT." those people that [checks notes] post about their own bodies, Jamil concluded with a suggestion that they follow "activists, writers, artists and comedians instead."