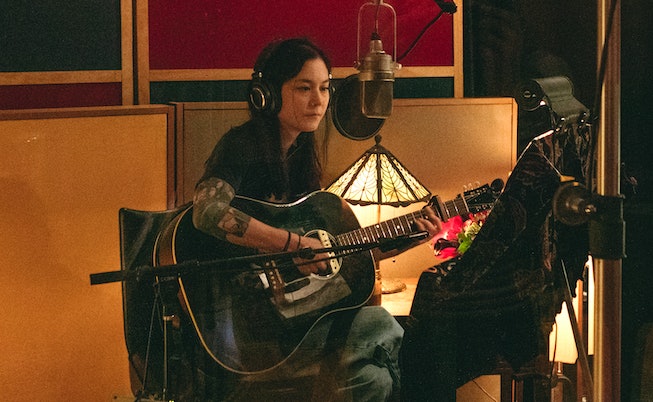 Growing up in Eugene, Oregon, author and Japanese Breakfast frontwoman Michelle Zauner regularly reached for her trusted North Face jacket. “Where I grew up, The North Face is kind of the uniform for hiking and cycling and just existing in the rain,” she says. “It was definitely a part of my childhood.”

It makes sense, then, that the brand tapped Zauner to help with the new It’s More Than A Jacket campaign. The initiative, which began a year ago, brings collected stories of exploration submitted by athletes, consumers, brand partners, and lifelong The North Face aficionados together for a display at San Francisco’s Museum of Modern Art First Thursday program.

Athletes like Alex Honnold, Jimmy China, and Ingrid Backstrom, designers Mark Erickson and Angelo Baque, and artist the RZA all contributed unique stories showcasing what a specific North Face jacket that they’ve worn through the years has meant to them. The entire installation is also comprised of recycled and post-consumer materials, and created with jackets from the brand’s upcycled clothing program, to convey the importance of reusing jackets for as long as possible.

“The stories, anecdotes, and submissions we’ve collected over the past year as part of It's More Than a Jacket have shown the deep connection and intense sense of nostalgia our community has for their The North Face gear,” said Mike Ferris, Vice President of Global Brand Management for The North Face. “Bringing a sampling of these stories to life in an experiential way at SFMOMA will allow them to live on, and hopefully inspire the next generation to use our gear for more unforgettable explorations.”

Which brings us back to Zauner and Japanese Breakfast. For the campaign’s music video, the Grammy-nominated artist rerecorded Brandi Carlile’s hit song, “The Story,” a process which Zauner called “a little intimidating,” especially since the song differs from JBrekkie’s typical fare. “The song has such a natural swooping lift into that chorus,” Zauner tells NYLON. “It just feels anthemic, like you've literally reached the crest of a mountain and worked really hard to get there. Both sonically and lyrically, it's a natural complement.”

Zauner, who likes to wear her own down jacket from The North Face x Gucci collaboration, says the experience of working on the campaign “was a dream.” She adds, “It was the best feeling to get to go into Electric Lady with Craig Hendrix, who wrote the beautiful string arrangement and played piano, and Molly Germer our violinist who performed it with her Quartet 121.”

Listen to Japanese Breakfast’s take on “The Story,” below.