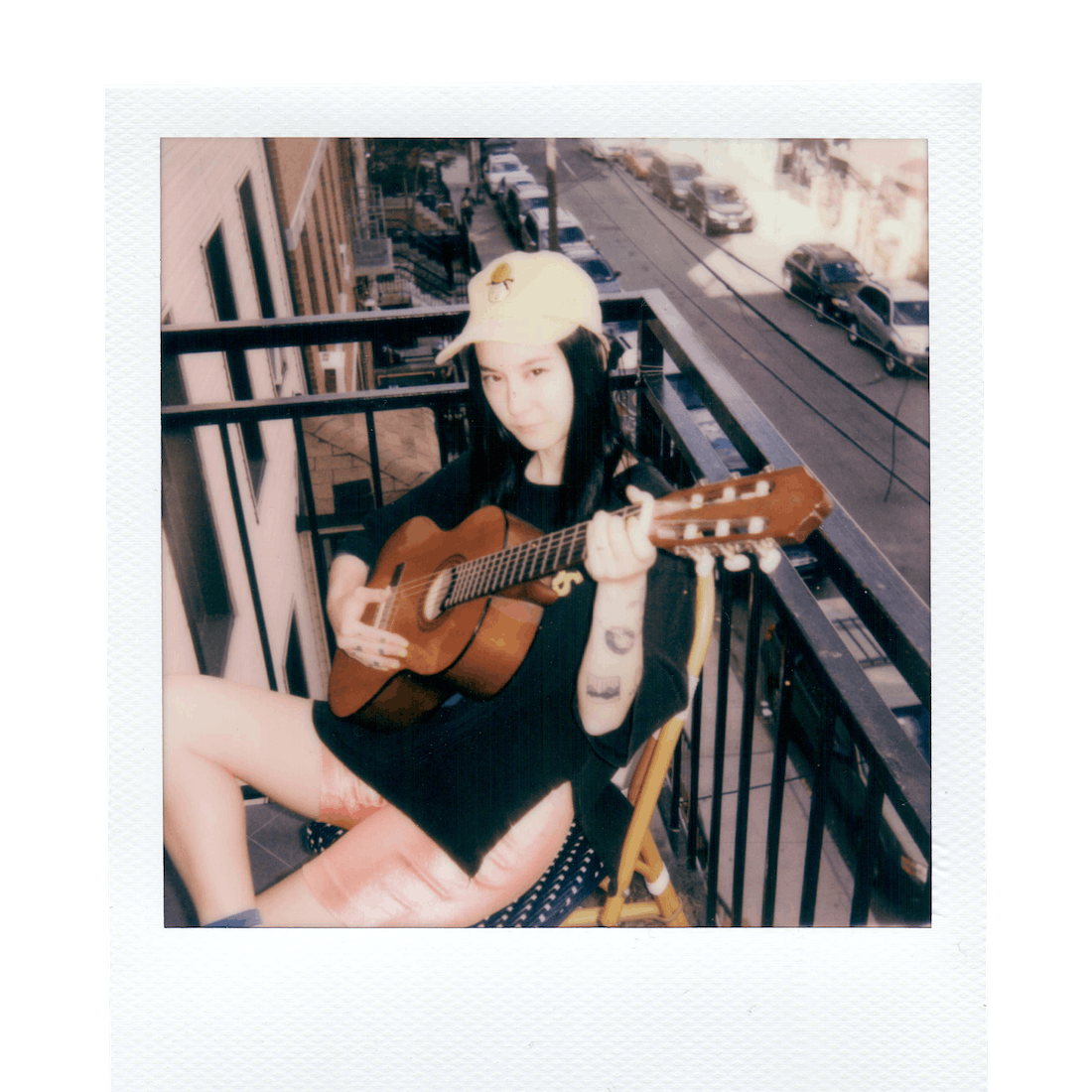 Japanese Breakfast On ‘Jubilee’ And The Work Of Sustaining Joy

With 'Jubilee,' Japanese Breakfast's Michelle Zauner reaches a new level of her craft.

Japanese Breakfast’s third studio album, Jubilee, opens with a sunrise. The song “Paprika,” bursting forth with blazing horns and pittering drums, is a hearty greeting to the album, delivered with the zeal of a theme park’s marching band and led by the impassioned cries of frontwoman Michelle Zauner. “How does it feel to be at the center of magic, to linger in tones and words,” she sings out on the hook, seemingly in reference to the music we’re about to hear. If Jubilee is a thesis, then “Paprika” serves as its loose mission statement that prepares you for the musical sermon one’s about to receive: “I want my offering to woo, to calm, to clear, to solve.”

After two albums centered around grief and excavating the emotional rubble caused by her mother’s death in 2014, Zauner is choosing joy, uncompromisingly and in big fistful-sized amounts. Jubilee, out June 4 via Dead Oceans, is her tenderhearted and wide exploration of the emotion, an endeavor spurred on after being subsumed in the opposite side of the emotional spectrum for so long.

For the last four years, Zauner’s been chipping away at her first book and memoir, Crying in H Mart, which fills, in devastating detail, the contextual negative space around her first two records, Psychopomp and Soft Sounds from Another Planet. It recounts the last chapter of her mother’s life and her bout with cancer, while also stretching all the way back to Zauner’s childhood to paint a vibrant portrait of her mother, their evolving relationship, and her own Korean American identity. Out now, Zauner says it was a necessary labor of love to finally close the book on the themes that have colored her work, art, and life for so many years. Now, with Jubilee, her gaze is firmly locked on the lightness up ahead.

“I think a lot of indie musicians are expected to be this kind of sad character,” she says one April afternoon over Zoom. “Obviously, I’m also a multi-dimensional person. I’m capable of joy and I was interested in seeing what that sounded like.”

The 32-year-old musician and author is sitting in the living room of her Brooklyn apartment with a professional mic propped in front of her and dozens of colorful artworks lining the bright yellow walls behind her. She’s wearing a baggy black Chester Cheetah T-shirt and is feeling a bit tired today, perhaps from the drizzly weather outside or the fact she spent the afternoon before at McNally Jackson, signing hundreds of copies of her book, its release date then just five days away.

It’s been a surreal few months for Zauner, who says she was initially nervous about the book’s reception for fear of not being able to capture her mother accurately, or somehow misrepresenting the Asian or Korean American experience. (With a Kirkus starred review, praise from many Asian American authors and public figures, and a No. 2 debut on the New York Times bestseller list, both fears have been unfounded.)

“I’ve never felt, honestly, stupider than writing this book,” she says. “Because it seems like writing should be this effortless thing, but anyone who’s written something knows that it can be quite a struggle and you can be so clear in your head of how you want to communicate an idea and somehow never quite hit it. You’re really staring down the barrel of your inability.”

When she finally turned in the rough draft near the end of 2019, tired and frustrated from staring at its pages for so long, she was relieved to finally turn her focus onto Japanese Breakfast’s next album. “I was so ready to run into the arms of a familiar lover,” she says. In the five months away she had from the book, she banged out Jubilee, a “much more collaborative and intuitive experience,” she says, than her previous records.

Whereas Psychopomp and Soft Sounds drew their powers from the rugged and cosmic waters of guitar and synth, Jubilee shatters those floodgates to embrace a fuller and more expansive sound. In a change of pace, Zauner wrote most of its songs on piano, an instrument that she’s been playing since she was 5 but only properly devoted herself to master in recent years, alongside music theory. (“I’ve always been someone that’s been really willfully ignorant of music theory and felt that I had this sort of naive understanding of music that came from not knowing much about it,” she says.) With help from her bandmate Craig Hendrix, she brought in a small orchestra of horn and string players, pushed her abilities in composing, arranging and producing, and invited musical friends Alex G and Crying’s Ryan Galloway, with whom she also released a quarantine EP, into the fold.

The result is an album that vibrates with sound and excitement, and a clarity to her serious devotion to her craft. It traverses mood and atmosphere, from jangly and funky ’80s pop, to dark watery synths, to jagged and blown-out indie rock. She listened to a lot of Beatles while making the album, which you can hear in the nostalgic, swaying melody of “Kokomo, IN.” “It is a really nerdy reference to have, because you’re like, ‘Have you heard of this band called The Beatles?”’ she says, laughing. She also listened to Kate Bush, Wilco, Randy Newman, and Björk. Their legacies as some of music’s most impassioned writers Zauner is able to match in equal measure on Jubilee.

Jubilee may be an album about joy, but it’s not without its darker moments. On the sinuous second single “Posing in Bondage,” she characterizes longing as a contorted paralysis, of wanting to be closer to someone but waiting for them to make the first move. On “In Hell,” a devastating song about putting her dog down, comes the biting: “Hell is finding someone to love and I can’t see you again.” But Jubilee’s brightest moments are blissfully bright like “Be Sweet”’s rush of tenderness and “Savage Good Boy”’s fizzy ode to her husband and bandmate, Peter Bradley.

“They’re all different ways that we interact with joy,” she explains. “Either preserving joy or fighting to experience it or struggling to experience it, or removing yourself from situations that take joy away, learning to sustain it or preserve it.” It’s a testament to her strength and perseverance as a songwriter and human, to be able to pick apart the sweet, sour, and bitter of every frame of life and still choose to keep moving forward.

Near the end of our conversation, I’m reminded by one particular passage in Crying in H Mart that comes right when she learns that, after rounds of chemotherapy, her mother’s tumor hasn’t gotten smaller. Her mom, reluctant to endure more treatment, decides that she’d like the family to take one last trip to her homeland, South Korea, together, to look out at the blue waters from the beach on Jeju Island. Zauner, understandably distraught, offers to film it all on camera to “make a documentary or something,” which she immediately regrets. “To co-opt something so vulnerable and personal and tragic for a creative artifact. I realized it as soon as I said it out loud and became disgusted with myself,” she writes. I ask Zauner how she reflects on that quote now that she’s written a book and released several albums about her mother.

“I feel like it’s really important and hard sometimes to present yourself as an unlikable character,” she says carefully. “It was this very shameful moment where I was just like, Your mom is dying and you’re still like... I think that’s just maybe the nature of being an artist. ... It was a very honest moment for me that it felt very necessary to have in the book. I think about that line a lot actually.”

“I don’t blame myself,” she continues. “I mean, that is who I am. I am a creative person that processes things these ways. And I know that not everyone is like that and it can seem somewhat indulgent to other people, but I don’t feel any guilt about making work about my life. I think the hope is that you create something for yourself and it resonates more with other people because of that.”