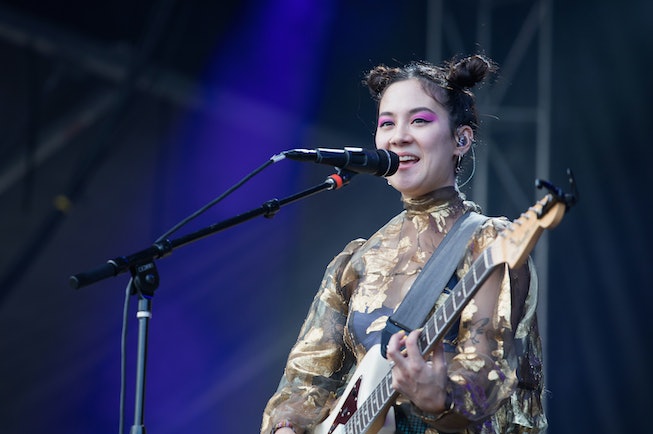 Michelle Zauner — the NYLON It Girl also known as the frontwoman of Japanese Breakfast — announced today that her stunning memoir, Crying In H Mart, is heading to the big screen. “It is a surreal thrill to have the opportunity to memorialize my mother in film,” she shared in a release. According to the artist, Orion Pictures acquired the rights to the book and are working on the screenplay. Meanwhile Stacey Sher and Jason Kim have signed on as producers, and Zauners band Japanese Breakfast will provide the film's soundtrack.

Crying In H Mart chronicles Zauners experience losing her mother to pancreatic cancer. Through the backdrop of traditional Korean dishes — and H-Mart, a supermarket turned safe haven — Zauner reconnects with her heritage and reflects on their relationship in heart wrenching detail.

Per the book’s synopsis, Zauner “tells of growing up one of the few Asian American kids at her school in Eugene, Oregon; of struggling with her mother’s particular, high expectations of her; of a painful adolescence” and, “of treasured months spent in her grandmother's tiny apartment in Seoul, where she and her mother would bond, late at night, over heaping plates of food.”

Those who are familiar with Japanese Breakfast know that Zauner doesn’t shy away from grief. Their album Psychopomp was written while her mother underwent cancer treatments, and their following record, Soft Sounds From Another Planet, utilized the pain of Zauner’s mom's death to “explore the cosmos.” Crying In H Mart is no different — Zauner dives straight into her own trauma and wades her way out, one chapter at a time.

Though steeped in tragedy, Crying In H Mart includes joyful moments as well. In it, Zauner shares the start of her music career, the moment she met her husband, and her journey to self acceptance.

We can only hope the film adaptation will do it justice, but maybe bring some tissues just in case.