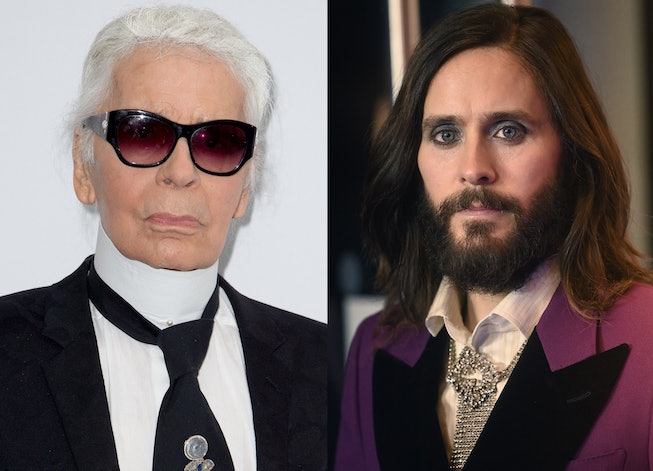 Jared Leto has been confirmed to play Karl Lagerfeld in a new biopic about the fashion figure.

“Karl was an artist. Period. He was a fashion designer, he was a photographer, he was an artist. There was no defining him. He was a creative powerhouse,” Leto told WWD. “I feel like this is a full-circle moment, and Karl would be proud of what we are doing.”

The Academy Award winner is no stranger to fashion films, having recently and memorably starred alongside Lady Gaga and Adam Driver in House of Gucci as Paolo Gucci donning tons of prosthetics and an Italian accent. He also has a long-standing relationship with current Gucci creative director Alessandro Michele, who happens to be his long-lost twin.

Born in Germany in 1933, Lagerfeld famously helmed creative at Chanel and also oversaw Fendi and his own eponymous line. Lagerfeld died in February 2019 at age 85, and his work will also be the upcoming theme of the 2023 Met Gala. In addition, the Metropolitan Museum of Art will host a "Karl Lagerfeld: A Line of Beauty" exhibit. It’ll be on view from May 5 - July 16, 2023, and will highlight "the designer's stylistic vocabulary as it was expressed in through lines — aesthetic themes that appear time and again — in his fashions from the 1950s to his final collection in 2019."

While Lagerfeld was known for his impact on design and his own signature black and white style, he also espoused problematic views. When the Met theme was announced, Jameela Jamil took to Instagram to call out the Gala for celebrating him. “This man… was indeed, supremely talented, but used his platform is such a distinctly hateful way, mostly towards women, so repeatedly and up until the last years of his life, showing no remorse, offering no atonement, no apology, no help to groups he attacked… there was no explanation for his cruel outbursts,” Jamil wrote.

The upcoming film is supported by the Karl Lagerfeld fashion house, which told WWD that the movie will focus on “key relationships in Karl Lagerfeld’s life, told through an unpredictable lens, much like the man himself.”

Leto said, “There are a multitude of relationships to explore. Karl had a career that spanned 50-plus years, so both personally and professionally he was close to a number of people. I can say we are going to home in on key relationships that convey different parts of his life. My role is to portray him on screen as honestly as possible.”

He continued, “With celebrity, most people don’t get to see under the surface. They see one or two facets of a person as presented through a public lens. Karl was a human being. We all have beauty within us and we all have faults. We have masks and then we have moments when we reveal the mask. I’m always interested in seeing what’s behind the mask.”