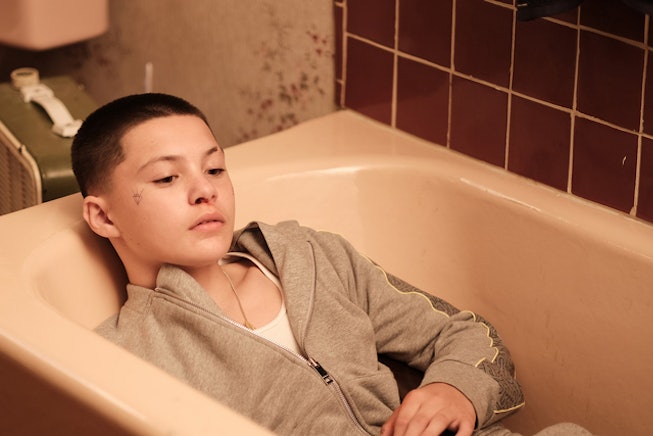 *Spoilers for Euphoria season 2 ahead*

In the finale for Euphoria’s high-octane second season, the characters of East Highland found their fates unfolding, intertwining, and for some, unraveling at the seams. But one character fared perhaps worst of all, to viewers’ surprise — Ashtray, the unofficial younger brother and “business partner” of drug dealer with a heart of gold, Fezco. Played by 15-year-old Javon Walton — who in addition to acting, is preparing for the boxing nationals — Ashtray had few lines this season but a big impact, with his face tattoos, steely-eyed stare and position as Fez’s tiny bodyguard, resulting in a possibly fatal shootout with a SWAT team.

The season opener introduced us to Ashtray’s traumatic backstory growing up with Fez and his criminal grandmother, experiencing enough violence and abandonment at a young age to become a hardened member of the underworld himself by childhood. Much of the season felt like a lead up to Fez’s eventual downfall, but in the end it was Ash who seemed to take a fatal bullet — after stabbing Custer (Tyler Chase) to death and murdering a cop first.

NYLON caught up with Walton the day after the finale aired to talk about his experience on the Euphoria set, his reaction to Ashtray’s arc, and whether he thinks there’s a chance his character is still alive.

Congratulations on the finale!

Thank you so much. I really appreciate that.

What a crazy episode. Did you go to school today?

Did you watch the finale with anyone?

Yeah, I watched the finale last night. But other than that, it was super chill. It was Sunday, so I took working out and all that off. I just got to watch the finale and man, it was a pretty sad ending.

When did you find out Ashtray’s fate?

It's kind of just left up to mystery because honestly, if somebody could take a bullet, it's definitely Ashtray. But we really found out all of that a day before we started shooting. You know, Sam really just did that whole thing in a day.

Man, shooting the scene ... well it took a minute to get all of the little parts right, because there was a lot of little bits and pieces. It took about three days to shoot the whole thing. But the gun stuff, I had to go to a shooting range and I learned how to really, properly shoot a gun. I ended up really doing that to learn for Ashtray’s shooting.

How did you feel about Ashtray’s shootout and potential death?

Honestly, I was really sad when I found out that all of that was going to happen, because I think that was probably going to be the end of Ashtray. And I love working on Euphoria. It was my very first project that I ever worked on, and that part of it is probably the saddest part. It's really sad. It's the very first thing I ever did. So hopefully it's not goodbye forever, but ...

What did you feel Ashtray’s motivation was, for doing what he did?

With Euphoria having been your first major acting project and having been such a hit, how are you feeling coming off of the finale?

Man, I am feeling really, really good. There's some stuff lined up for me right now that I'm super excited to drop, which is Umbrella Academy and Samaritan. For Umbrella Academy, it's really cool, it's this twist that people aren't really going to be expecting. Jeff King and Steve Blackman did an amazing job developing my character and it's going to be really, really cool seeing it all come to life. It's a dark twist for a superhero movie, which is super, super cool. So, I feel great right now and I'm really just happy with how Euphoria's done this season. It's just really amazing and taking that all in, it's just great.

Being one of the younger people on set, did you feel like others were there to guide you and mentor you, or did anyone take you under their wing?

Not necessarily, no. I mean, Z was a great influence, definitely. Because she's been doing this pretty much since she was really, really little. I got to really see how she did it, and that definitely helped. Having people that I was really cool with on set definitely helped me and helped guide me in a way that was good, for even the next season of Euphoria. Because I had a four year difference from when I shot the first season.