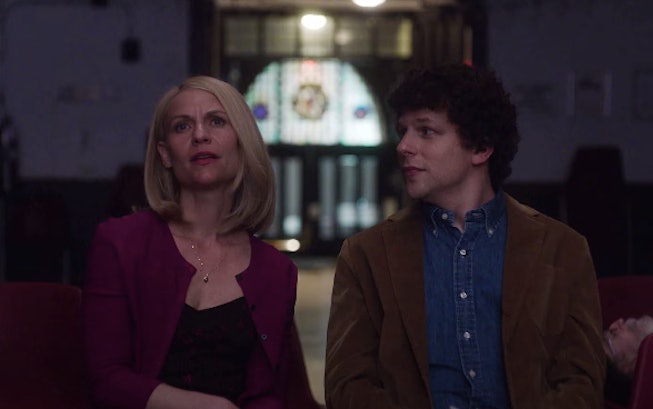 “This is a story about everything,” announces an unseen narrator in the new trailer for FX and Hulu’s upcoming series Fleishman Is In Trouble. “It’s about life, and marriage, and how young love can become old resentment, and money, and dissatisfaction, and jealousy, ambition, career, parenting, nostalgia, and lifelong friendship.” So, yes. This show is definitely doing a lot.

Based on the 2019 New York Times bestselling novel of the same name — remember when everyone and their mom seemed to be reading this book during the pandemic? — FX’s Fleishman Is In Trouble was created and adapted for television by original author (and New York Times journalist) Taffy Brodesser-Akner. The new eight-episode miniseries follows Toby Fleishman, a divorcée who, as the new trailer succinctly explains, awakes one day at 4:00 in the morning to find that his ex-wife has dropped their two children off and disappeared without a trace.

Or, as it is described in a plot synopsis: “Fleishman Is in Trouble is the story of recently divorced 41-year-old Toby Fleishman, who dives into the brave new world of app-based dating with the kind of success he never had dating in his youth, before he got married at the tail end of medical school. But just at the start of his first summer of sexual freedom, his ex-wife, Rachel, disappears, leaving him with 11-year-old Hannah and 9-year-old Solly, and no hint of where she is or whether she plans to return.”

The story kicks into gear after this development, honing in on how this major life adjustment eventually forces Toby to unpack some of the deep-seated problems he’s been avoiding for so long. “As he balances parenting, the return of old friends Libby and Seth, a potential promotion at the hospital that is a long time coming — and all the eligible women that Manhattan has to offer — he realizes that he’ll never be able to figure out what happened to Rachel until he can finally face what happened to their marriage in the first place,” a synopsis reads.

For fans of the book, have no fear. The series adaptation comes with a stacked cast. The Social Network’s Oscar-nominated Jesse Eisenberg stars at Toby while Homeland’s Emmy-winning Claire Danes stars opposite him as Rachel. Their kids will be played by Don’t Look Up’s Meara Mahoney Gross, as Hannah, and Halston’s Maxim Swinton, as Solly. Meanwhile, Mean Girls’ Lizzy Caplan will appear as Libby while former teen heartthrob Adam Brody will be portraying Seth. (Coincidentally, “Seth” is also the name of his iconic character in The O.C.)

Like all “FX-on-Hulu” shows (think What We Do in the Shadows, Atlanta, Reservation Dogs), Fleishman Is In Trouble will push out new episodes on a weekly basis after premiering with the first two on November 17. Sure, this seems like the kind of show I’d love to binge in one sitting. (Well-off people suffering first-world problems!) But, hey, this way, we can talk about Jesse Eisenberg’s “Playboy of Manhattan” cosplay for at least a month and a half. No complaints there.

Fleishman Is in Trouble premieres with its first two episodes on Hulu on November 17.