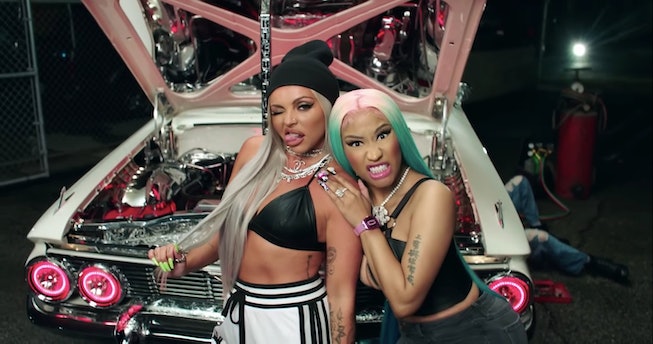 British pop-singer Jesy Nelson is facing allegations of blackfishing yet again. Blackfishing is a form of cultural appropriation, when someone who isn’t Black alters their looks to appear as if they are. Nelson was first accused of this on social media, when photos surfaced of her looking racially-ambiguous in May. The singer claimed to have done so unintentionally, telling The Guardian, “I would never want to offend anyone, and that was really upsetting. I wasn’t aware that’s how people felt.”

Somehow Nelson found herself repeating the same mistakes in the music video for her new song, “Boyz,” which samples P. Diddy’s “Bad Boys For Life,” and includes a verse from Nicki Minaj. The rap and R&B-infused track is the artist's solo debut, marking a drastic shift from her bubble-gum pop days in Little Mix. However, many online have questioned why the singer's new sound includes a drastic change in her appearance as well.

Despite the public's concerns, Nelson claims she’s simply being authentic for the first time and that's why it’s so shocking. Keep reading for everything we know about the controversy as it continues to unfold.

On Monday afternoon, Minaj invited Nelson on Instagram Live to chat about their new song, and the backlash it's received. After discussing the singer's past with bullying — Nelson disclosed that she was often criticized for her appearance and weight while performing with Little Mix — Minaj supported her decision to express herself however she likes. The rapper then explained her frustration about the black-fishing claims.

“Listen there’s a lot of women out here in the United States that tan, get bigger lips, and do a lot of shit to themselves. I wear blonde hair straight down to the floor if I want to... As long as you’re not hurting anyone, do whatever.” She went on to declare that as long a singer isn’t falsely identifying as Black then they should be able to appear however they’d like, because it’s “their fucking business.”

In a strange turn of events, Minaj also publicly shamed Leigh-Anne Pinnock, an actual Black woman, for her comments about the video. Despite beginning the live with pleas for kindness, she told the singer to “take those text messages (from a leaked exchange) and shove it up your fucking ass.”

Minaj also said, “If you want a solo career babygirl, just say that. You don’t have to attack someone else,” while Nelson gleefully nodded along.

Nelson claims her former band-mate, Leigh-Ann Pinnock, said she could pass as mixed

During the live, Nelson reiterated that her intention was not to offend anyone. “I didn’t even have any tan on,” she said, claiming to have just gotten back from vacation prior to filming the video.

The singer also said she’s just a “lucky” white person because of how dark she can get naturally, and claimed Pinnock once mentioned it. “Leigh-Ann even said to me in the group, ‘Are you sure you’re not mixed race, you tan darker than me’,” she quipped.

Nelson then clarified that her hair is naturally curly. “I get it from my dad,” she told Minaj. However she purchased a wig that “emulated” her natural texture, to protect her real hair during the video-shoot.

Towards the end of the live-stream Nelson said, “I was in a group with two women of color for nine years, and it was never brought up to me until the last music video I did, when she (Pinnock), was like ‘Jesy I just want to make you aware.’”

A source told The Sun, “Leigh-Ann had a conversation with Jesy, trying to explain why she was upset and why it could be offensive. She felt she had to address it while making her racism documentary, but it apparently fell on deaf ears.”

Nelson insists that her new sound is true to her roots

The singer told Minaj, “Growing up this was the music I listened to. This is what I thought was best...and so, I just wanted to celebrate that. My intentions were never to offend anyone. That actually really hurts me that I may have offended people, just by celebrating something that I love.” Minaj then assured her there was nothing to worry about, then congratulated Nelson on her new era, before they both signed off.

The other members of Little Mix Unfollowed Nelson

Following the release of “Boyz,” the rest of Little Mix has unfollowed Nelson on Instagram. The other group members (Perrie Edwards and Jade Thirwall) have yet to comment on the situation publicly, but have reportedly cut ties with the singer.