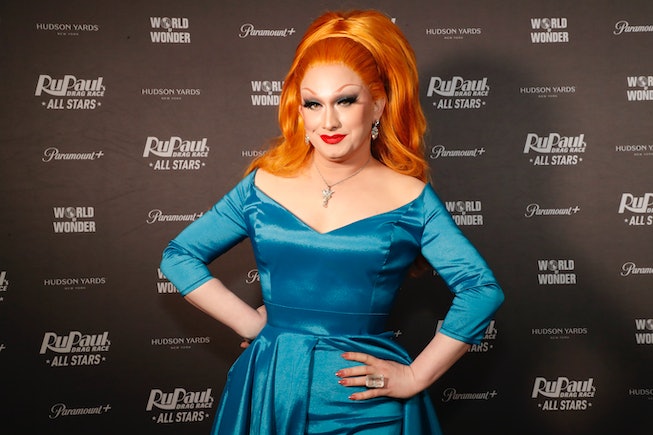 When I spoke to Jinkx Monsoon earlier this year, the winner of RuPaul’s Drag Race season five said she felt a lot more confident now, in 2022, than she did in the immediate period following her win in 2013. “What I found in the last handful of years is that, [the more] I focus in on why I started doing drag in the first place and why I chose this artform as my medium with which to share my talents and my passions, the more I resonate with my audience,” she told me. By then, the “talents and passions” of the Portland-based queen had already been well-established: a trained actor and singer with multiple stage credits to her name, Jinkx Monsoon was beloved by the Drag Race fandom for her Old Hollywood quirk and quick wit, which shined bright in singing, acting, and comedy challenges — pretty much anything that didn’t involve design.

So for All Stars 7, the first all-winners season in the wider Drag Race universe, Jinkx Monsoon didn’t have as much to prove as she had standards to live up to. What could possibly be funnier than her rendition of Grey Gardens’ Little Edie in her original Snatch Game? Oh yeah, maybe a Judy Garland who rails fat lines of coke off of Frank Sinatra’s penis. How does she one-up her season five roast? Well, you make several hilarious jokes about one of your costar’s comically large penis. (Wow, a lot of dick this season!) Jinkx even upgraded her wardrobe and makeup skills this time around. (“I feel very confident with the way that I’ve progressed as a drag performer when it comes to my aesthetics and my look,” she told me a couple months ago.)

It was clear, from the very beginning, that Jinkx Monsoon was one of the best to ever do it, even when she was competing alongside others that had also proven themselves to be the best. She dominated in almost every aspect of this competition. So after winning nearly half of the season’s challenges, it only made sense that Jinkx Monsoon would eventually be crowned Drag Race’s inaugural Queen of All Queens. Her win was a decision nobody could argue with.

Just hours after being announced as the final winner for All Stars 7, Jinkx Monsoon hopped on Zoom with NYLON to talk about being the franchise’s first-ever double winner, what she plans to do with her $200,000 grand prize money, the strains of perfectionism, why she loved bonding with her castmates, meeting Cameron Diaz, and what we can expect to see from her next.

So, you're officially the winner of the first all-winners season of Drag Race. How does it feel to be able to say that?

It's very surreal. It hasn't fully washed over me yet, but part of that is because I'm currently on tour in Australia. I had a show last night, so I found out the results in the middle of getting ready and I've only had three hours of sleep since then. So it…it doesn't live in my body yet. Are those hippy enough terms for it?

You’re $200,000 richer now. Do you have any immediate plans for your prize money?

You know, I'm old and boring now, so there's some plumbing repairs at home that I've been putting off. [laughs] But also, my husband and I got married only a few months before I actually filmed Drag Race. He hasn’t been able to immigrate and move in with me yet so we just got these placeholder rings, and I said that if I win, I was going to go real big on our forever rings. So that's something I have planned.

You’re the first person to win this show twice. Does this win feel any different than when you won season five of Drag Race in 2013?

I think so, yeah. I had a strong sense of self when I went on season five, but I was really young, and since then, I've just lived a lot of life. So I feel like I was pretty laser-focused going into this competition in a way that was different from the last time. The last time, I was just happy to be there. This time, I was like, Okay, here's a chance to show everyone what I've been working on since I was here last time. And really, over the last almost-decade, it's just been all drag for me, so I was really excited to show off all the ways I've been honing my craft over the years.

You said you were laser-focused coming into this season. Did you start the competition with a crystal clear image of yourself standing in this winner’s spot?

I always try not to look too far ahead because I'm a little bit of a perfectionist. So if I made winning my goal, [the competition] would've been ten-times more stressful than it already was. But by the point [I made] the top four, it's just like competitive Jinkx kicked in. Just like last time I competed, when I make it to that final position, I'm just ready to do whatever it takes to win.

You dominated throughout the entire competition. You were the only queen who was guaranteed a spot in the finale, even with the three-stars-for-one-win twist. Was there any point in the competition where you thought, I have it in the bag or were you on your toes the entire time?

I stayed on my toes the entire time because we know that Drag Race is full of twists and turns, mama! I didn't really relax until that moment you're talking about when I was like, Oh, mathematically, I can't be kept out of the finale. That was the only moment in the whole season when I relaxed, and that was just for five minutes. But the most irritating thing was continually having to do math and statistics throughout the season. I'm an actor, so I hate doing simple math. Every episode when someone got a new star, we would all sit there and calculate the statistics for one of us making it to the finale. That was the most irritating thing, was all the math.

I was just about to ask you what the hardest part of the competition was. Would you say it was trying to keep up with all the math and statistics?

I think it's no secret that the hardest part of the competition, logistically, for me, was the design challenges. But I think that, since I’m not a designer, those didn't even freak me out as much as, like, Snatch Game or some of the acting and improv challenges. When you're known for something, the pressure is on to really show off in the challenges that play to that strength. So it felt a little bit at times like being Chad Michaels and having to do Cher every episode or something.

What was your favorite part of the competition?

My all-time favorite part of the competition was just forming the sisterhood with the other cast-members. It was such a different experience from competing the first time, because we all had lived this experience a little bit and we had a lot of shared experiences to draw from on. I think that really bonded us very quickly. My other [favorite part] was probably finding out that Cameron Diaz was a Drag Race superfan. Who knew?

Is there anything you would redo if you had the chance?

I don't like to think about redos because, as a perfectionist, I'll just get lost in the Multiverse of Madness trying to think about.

Now that you’ve won for a second time, you’re going to get an entire new platform to preach the Gospel of Jinkx Monsoon. What message do you most want to impart on your fans after going through the competition and emerging victorious once again?

One of my favorite things about this season — and I think, with everything going on in the world right now, it's kind of the perfect message — was that it was all about celebrating each of the cast-members and all about us uplifting and supporting each other, even amidst the competition. I think we’re at a point in time where we really need more positivity and we really need to see the power of celebrating one another and uplifting each other and having each other's back. Even in the midst of a competition, it doesn't hurt to uplift the people around you. One of my favorite quotes of all time is: A candle loses nothing by lighting another candle. I think that's what this season was, and I think it's the perfect message for where we are in time right now.

Finally, what are you most looking forward to doing during your new reign as winner?

I just want to keep doing what I'm doing, but in bigger and bigger ways. I really love the work that I do. I'm really excited to continue to create my own work with BenDeLaCreme, with my music partner Major Scales, and with my comedy partner Nick Sahoyah. I've got a new sketch show coming out with WOWPresents Plus called Sketchy Queens. I'm really excited to get the chance to do more acting, more scripted work, and more voiceover work. But also, I’m really excited to see where this will take me with creating my own work.

Season seven of RuPaul’s Drag Race: All Stars is streaming on Paramount+ now.