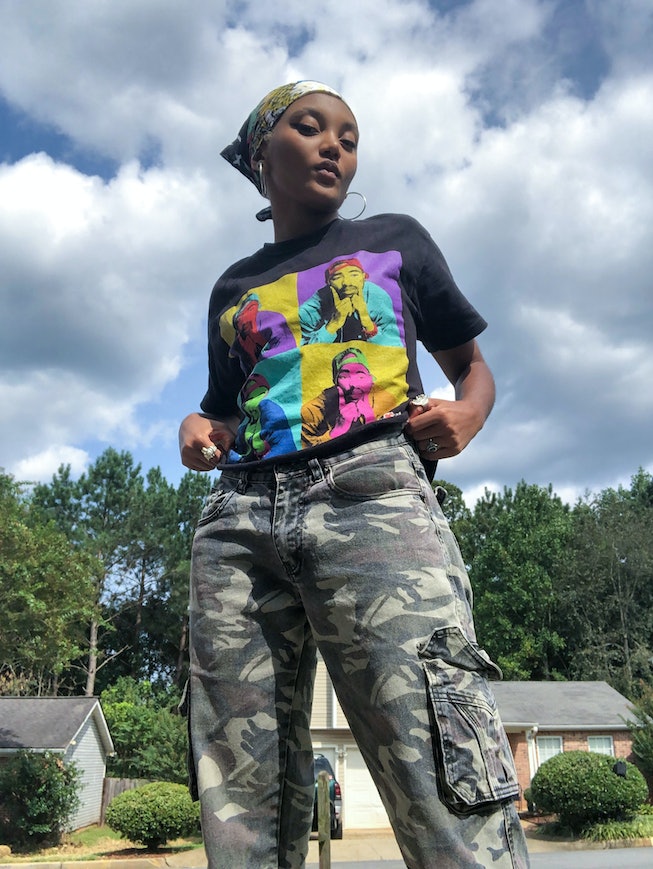 Jordan Kristine Seamón is in the middle of telling her origin story when she’s rudely interrupted. “I was born and raised in Philadelphia, Pennsylvania,” she begins. “I was 6 years old when I told my parents I wanted to be an entertainer. They were the most amazing and most supportive parents ever. They…” A bark echoes from her side of the computer. “Sorry,” she interjects. “I have a puppy and she's very upset that I've been in my room all day doing interviews.” Moving to another room and continuing her story without missing a beat, the 17-year-old reflects on the series of events that led to her breakout role as Caitlin in HBO’s We Are Who We Are, a moody, eight-episode coming-of-age story from Call Me by Your Name director Luca Guadagnino.

Seamón’s first love was music. In addition to learning how to act at “a little theater company called FreshVisions Youth Theater on Germantown Avenue,” she’s also spent the better part of her life pursuing music, performing in musical theater productions at boarding school, and even joining a girl group for a short period of time.

Most recently, Seamón released an album under the cheeky pseudonym JK called Identity Crisis, a tidy 10 songs with lyrics as personal as its production is crisp. On single “thnx,” Seamón’s soothing voice glides easily over a slowed-down beat, crooning cynically, “Thanks for loving me/Even though it was insane.” There’s a heavy knowing in the album — with the influence of similarly confessional artists like FKA Twigs, Jhené Aiko, and Kehlani popping up in the tracks — that draws the listener in more closely as Seamón sings stories dispatched from the surreality of being 17 in the year 2020.

We Are Who We Are provided Seamón another chance to explore adolescence through art. “My music career was doing really well, so well that I couldn't focus on acting. Then all of a sudden out of nowhere, We Are Who We Are popped up on my radar, I auditioned, and now we're here,” Seamón says. Like Call Me by Your Name, the romantic drama that launched Timothée Chalamet to heartthrob status, We Are Who We Are focuses on the lives of Americans living abroad while dealing with the awkwardness of growing into yourself. The limited series returns to Guadagnino’s native Italy, following the lives of two American teenagers living on a fictional U.S. military base in 2016 Chioggia.

Seamón stars, opposite a bleached-blonde Jack Dylan Grazer (It, Shazam!), as Caitlin Poythress, a confident young woman who is close to her lower-ranking military father, Richard, played by Kid Cudi. Caitlin, who speaks Italian and has lived on the base for a few years, befriends 14-year-old Fraser (Grazer), an aspiring fashion designer whose mother, Sarah (Chloe Sevigny), takes command of the base as a newly arrived colonel. The headline-grabbing casting of Sevigny and Cudi makes perfect sense; the former cool kids become the parents in a world where the older generation is just as lost as the new one. In We Are Who We Are, everyone is having an identity crisis.

That mutability applies to Guadagnino’s working style, too, according to Seamón. Working with Guadagnino was “different every day,” with “not only was every scene different, but Luca’s demeanor on how the scene might be could completely and totally change.” A trial by fire for the young actor, filming We Are Who We Are required a willingness to embrace the unknown, even when the unknown was physical. “You never know what to expect, but I think it's good,” she says. “It definitely kept me on my toes and helped me really understand that in the field, anything's possible, anything can change and you just have to be ready, prepared, and you have to try your best to stay in a good mind.”

Nothing quite prepared Seamón for the adaptability she learned on the job, on set. “You keep showing up to work,” she recalls, “and you're like, ‘OK, Luca what do you have for me today?’ It's like, ‘I think today you're going to jump off this tall thing.’ And you just got to jump off of it. ‘That's it?’ ‘Yep. Just jump off of it like a few times. Go ahead.’ ‘OK, all right sure, I guess!’ But it was definitely fun”

She adds that Caitlin’s affinity for the outdoors and nontraditional approach to femininity — in one scene, Fraser shaves her head — immediately appealed to her, as someone who grew up participating in sports, including archery, karate, tennis, competitive swimming, and track and field. “[Caitlin] shot guns, she hunted, she was a kickboxer, she knew how to boat. She was really a strong person in general. I was really drawn to that.” She adds, “Seeing how similar Caitlin and I were in just constantly doing things, not just things outside, but also things that some people might consider not feminine or not for girls, it really made me think, ‘Oh, this would be a good role for me to play because I'm the exact same way as Caitlin is in the way that I don't really care if something's not for girls or considered for girls. Anything's for anybody and if he can do it, I can do it.’”

Embracing the unknown is the task of any young person, not just artists. Seamón attributes her willingness to give it her all to her parents and their own belief in her. “[My mother] always believed that I was going to be a star,” she says, adding that Caitlin’s close relationship with her father in We Are Who We Are mirrors her own friendship with her dad. “The first self tape that I did was one of the scenes that was between Caitlin and Richard,” Seamón says. “I just thought it was such a cute little relationship, how comfortable they were with one another. It reminded me of how comfortable I am with my dad and how open our relationship is and how we talk about pretty much everything at this point.”

The ability to relate, to communicate vulnerability in a way that lands with mutual recognition between giver and receiver is an art form we need right now, through any and every medium. On all platforms, Seamón delivers. “I do think a lot of people will resonate with Caitlin,” Seamón concludes. “Not only because of the things that she goes through, but the interesting dynamic that she has with so many people. I think it'll definitely be familiar for a lot of other people because in some ways it was very familiar for me.”