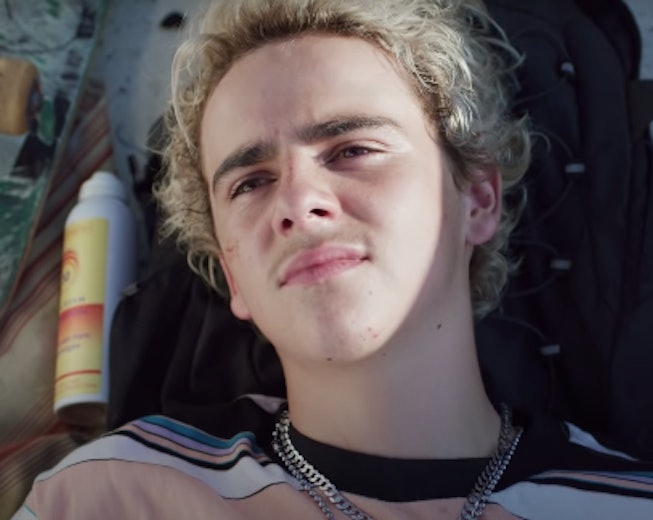 Though he had already amassed a sizable fanbase for his gorgeous 2010 drama I Am Love, Luca Guadagnino really became a household name in 2017 for Call Me By Your Name, his electrifying film adaptation of Andre Aciman's beloved novel about two young men's whirlwind romance over one summer. Not so coincidentally, both of those films took place in the director's hometown of Italy, providing the perfect background scenery for these immersive tales of forbidden love. Now, the revered Suspiria director is returning to his hometown yet again for a different kind of story in We Are Who We Are, his first foray into the realm of television, which got its first teaser trailer today.

Set on an Italian military base, We Are Who We Are tells the coming-of-age story of two American military brats: Fraser, the "shy and introverted" fourteen-year-old son of lesbian military parents, and Caitlin, a "seemingly bold and confident" young girl who has lived on the base for several years. As the official tagline reads, "The series explores typical teenage drama themes including friendship, love and overall confusion." Judging by the trailer, the series will feature all the trademark details of a Guadagnino project — long bike rides, questions of identity, explorations of queer desire, complicated parent-child relationships, and overwhelming feelings of alienation ("all the messy exhilaration and anguish of being a teenager"). An Official Selection of the 2020 Cannes Film Festival Directors' Fortnight, HBO describes it as "a story which could happen anywhere in the world, but in this case, happens in this little slice of America in Italy."

It's Jack Dylan Grazer and newcomer Jordan Kristine Seamon will star as Fraser and Caitlin, respectively, making We Are Who We Are one of very few shows to actually cast real teenage actors in teenage roles (Grazer is 16 and Seamon is 17). The rest of the cast is balanced out by a number of recognizable names, like How To Make It In America star (and stoner rap icon) Kid Cudi as Caitlin's father, All American's Spencer Moore II as Caitlin's older brother, Queen of the South's Alice Braga as one of Fraser's moms, all-around It-Girl (and former NYLON cover girl) Chloë Sevigny as Fraser's other mom, and Synonyms's Tom Mercier as their assistant. Guadagnino has also cast a bevy of new faces for his debut series, including Faith Alabi as Caitlin's mom; Ben Taylor as her "possessive boyfriend" Sam; Corey Knight as Craig, a "cheerful and good-natured" soldier who is also Sam's older brother; Francesca Scorsese as Britney, "an outspoken, witty, sexually uninhibited girl" and one of Caitlin's closest friends; and Sebastiano Pigazzi as Enrico, "a playful eighteen-year-old from Veneto, who has a weak spot for Britney."

Check out the mesmerizing trailer below. We Are Who We Are premieres September 14 on HBO at 10:00pm ET.

NEXT UP
Culture
Phoebe Dynevor Will Not Return for Bridgerton Season 3
Culture
6 Shows To Binge Once You've Finished 'The White Lotus'
A Night Out
A Night Out With Rachel Bilson
Culture
Succession Season 4 Trailer Explodes With Family Drama
Style + Culture, delivered straight to your inbox.