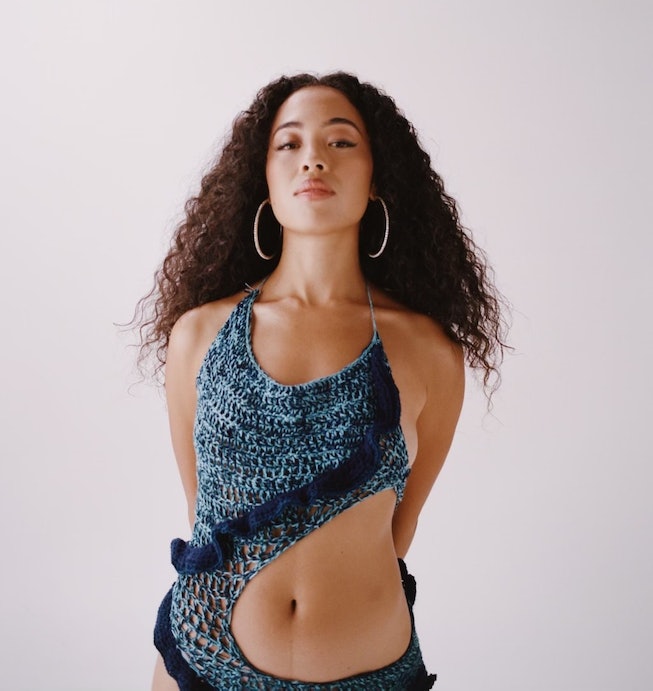 When it comes to unforgettable early-aughts theme songs, not many compare to that of The Proud Family, sung by none other than Solange with backing vocals from Destiny’s Child. With its sparkling R&B sound and ambitious vocal lines, it was a tune catchy enough to stand on its own beyond the confines of its show.

Like everything else we loved in the ‘00s, The Proud Family and its theme song have been revived for a second life on Disney+ as The Proud Family: Louder and Prouder, with a revamped opener sung by the charismatic rising R&B star Joyce Wrice. Her version retains the soulful melody of the original, just buffed up and polished with new lyrics and an updated sonic palette. Created alongside Kurt Farquhar, the producer and songwriter behind the original, Wrice’s rendition finds an elegant balance between nostalgia and modern edge.

“I auditioned with them and I literally sang three lines, I didn't even get to the pre-hook,” Wrice tells NYLON over a recent video call about the whirlwind process that scored her the gig. “And they were like, ‘We love her. We want her.’”

Fittingly, the 29-year-old San Diego native is no stranger to interpreting the plush retro sounds of the ‘90s and ‘00s in her own music. Growing up as the only child of a Black American father and Japanese mother, she was raised during that golden era of hip-hop where gritty verses were intertwined with sweet R&B interludes. She later mined that same sound on her 2021 debut album, Overgrown, a 14-track dream with star features from Lucky Daye, Kaytranada, Masego, and Freddie Gibbs — an intoxicating soundscape that equally pays homage to and forges her own sonic path off of that era.

“[Overgrown] was everything I would want my album to be. There's so much balance in the production, but it's still very pure and sweet R&B,” she says.

Ahead of Disney+’s Louder and Prouder’s premiere, NYLON caught up with Wrice about recording the show’s revamped theme song, what she loves about ‘00s R&B, being compared to Aaliyah and Tamia, and her upcoming spring U.S. tour with Lucky Daye.

How did you approach re-recording the Proud Family theme song?

I wanted to make sure it still felt very nostalgic and classic. That was my goal. And the best way for me to do that was to keep the original in mind, but also bring what I have to offer. A lot of people say that they like my tone, so I really finessed my tone and thought about artists that I grew up listening to. When certain parts had to be sung, I thought about Brandy. I definitely thought about Destiny’s Child and Solange and Mariah Carey. And I thought about me, as a genuine fan. What do I want to hear years later?

Were you nervous at all?

Very nervous. I was intimidated. There was so much pressure. There wasn't pressure put onto me because no one knew about it, but subconsciously there was a lot of pressure. And also Disney too, Disney was very nervous about how people would react. So they really wanted to, when it came to the announcement, really ease into it all, but I had to just let go of my nerves. I had to let go of it and just do my best.

Everything is getting revived these days, but I feel like everyone is really excited about Proud Family in particular. Why do you think the show still resonates with so many people to this day?

I think it's still rare to see a Black animated series, and it's important for us to be represented truthfully. We need our stories to be told. A lot of times everything is typecast and stereotypes are perpetuated, so I think it's very important that more of these types of TV shows are being seen. This is something that I had the privilege to see growing up so I think this generation deserves that as well. And it's always fun to do reboots and remakes of classic TV shows from the past. I think it makes a lot of sense.

Your own songs really mine the '90s and '00s R&B sound. What about that era of music inspires you?

Man, it's so hard for me to pinpoint it, but I grew up in San Diego. My dad's Black and my mom's Japanese and I'm the only child. My first vivid experience with music was when I was in the car with my dad and this song by 112 and Notorious BIG called “Only You,” it was a remix, started playing. The main artist is a rapper, but then this R&B group is on the record, and they're singing sweet and romantic lyrics, but then this rapper is coming in all gritty and rugged, and I just loved that juxtaposition so much. That song, that whole experience just made me want to know more, listen more, learn about the culture.

From then I was introduced to Tamia, who is a beautiful soul singer. And I didn't know anything about love or romance, but there's something about just the voice as an instrument and expressing yourself through music that made me want to figure out how I can do that, too. Be a part of that world. I was a bit sheltered because my dad was in the Navy, so he wasn't home and my mom was working all the time, so I just really immersed myself into music and the hip hop world. It became my best friend, the sibling I never had. And it just entertained me so much. That was my first love. So I don't know. I just owe my life to it, I feel like, because it's what kept me sane. It's what's kept me feeling, I don't know, true.

Do you have any desire to try other sounds or go into other genres?

Yeah. I'm so open to that. I think in the past, I was guilty of judging, for example, like Beyoncé. I'm a huge Beyoncé fan and I love her debut album Dangerously in Love. Then afterwards, I was like, she's doing this rap thing and I'm not sure how I feel about it. But then as I got into doing music, I realized you don't want to do the same thing. It really depends on your goals. After a while you want to challenge yourself, you want to grow and you want to expand. So I definitely see myself exploring other ways of expressing myself. And the new song that I have coming out, it's not too different from what I've done, but sonically I would say that it's a bit different from my album and my songs. I look forward to continuing to be unpredictable.

Your voice has been compared to Aaliyah, Ashanti, and Tamia. Are you ever bothered by those comparisons?

Personally, it doesn't bother me because I'm such a huge fan of those artists, and I grew up listening to them. I feel like subconsciously, there's pieces of them in me. I can't not acknowledge them, because I wouldn't be who I am without them being an inspiration of mine. But I do think it's important to see the artist for who they are, and not yet too caught up in the references, you know what I mean?

What's important is to still see the artists for who they are and what they represent.

With Jazmine Sullivan’s return and such, R&B is having a big moment right now. Who are some of your peers that really inspire you and who you’d want to work with?

Oh, I love Jazmine Sullivan. I've been a fan of hers for many years. I love Fana Hues. Oh, my gosh. She's so mesmerizing. I was just with Tiana Major9 the other day. She's one of my favorite vocalists. She has a new song that she performed at her rehearsal, because she's going on tour with Jazmine Sullivan and opening for her. I love the song so much. Her tone is one of my favorite out of many artists that I've come across. Ravyn Lenae, the new album coming out that I'm really looking forward to. Vocally, she has that whistle, that Minnie Riperton high voice that I would love to be able to do. But I love Raven. She's classically trained and just super impressive. Who else? Bree Runway is super dope.

We think she's going to be huge.

I have been watching her videos and her artwork. It's so, so incredible. I just love this world that she's creating.

You have a big year coming up. You're also going to go on tour with Lucky Daye. What are you most looking forward to there?

What I'm most looking forward to with the Lucky Daye tour is just traveling the United States with him and being able to bring my music all over, and being introduced to the new audience, hopefully gaining new fans. I've never been to some of the places that I'm going to, so I'm excited.

The Proud Family: Louder and Prouder is streaming now on Disney+.

NEXT UP
Entertainment
Meet Amy Allen, The Grammy-Nominated Songwriter Behind Pop's Most Honest Hits
Entertainment
Harry Styles' "As It Was" Grammy Performance Featured A Silver Tinsel Onesie
Entertainment
Beyoncé Is Now The Most Awarded Artist In Grammy History
Entertainment
Taylor Swift Sparkled In Midnight Blue On The 2023 Grammys Red Carpet
Style + Culture, delivered straight to your inbox.