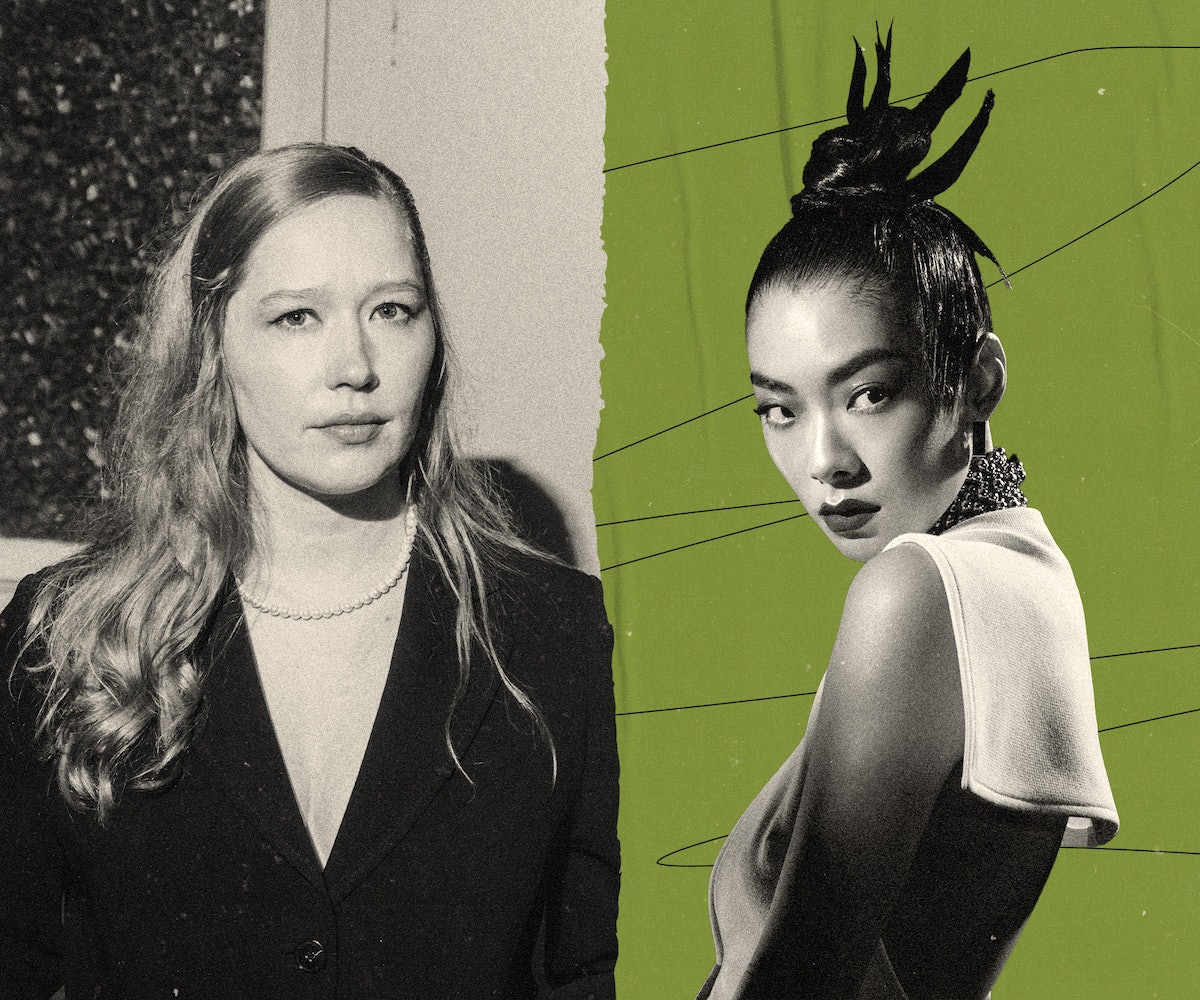 Julia Jacklin and Rina Sawayama aren’t usually considered musical peers. The former is an Australian singer-songwriter best known for her piercingly haunting vocals and almost addictively sad love songs. While Japanese-British pop star Sawayma makes anthemic music celebrating her queerness, personal growth, and chosen family. However, despite their seemingly disparate creative paths, it’s impossible to ignore that within the last few years, the two artists have begun to embark on a similar trajectory.

Both musicians released their breakout album within a year of the start of the pandemic: Jacklin’s February 2019 Crushing, an introspective, acoustic collection of breakup tunes, garnered the artist newfound mainstream acclaim outside of Australia, while Sawayama’s April 2020 debut pop record, SAWAYAMA, similarly rocketed the musician to new heights. Almost immediately after gaining more fame and recognition than they’d ever had, both musicians were forced into lockdown. In interviews, they gave similar remarks about how quarantine forced them into an unprecedented period of introspection. “I’ve never had this much time off in my entire life….I have every second of the day to question whether I’m good enough, whether all of this was a fluke,” Jacklin told Pitchfork in 2021. In May, Sawayama told Rolling Stone UK that she used lockdown to begin an intensive and specialized form of therapy to process some trauma from her teenage years: “It was emotionally and personally one of the hardest things I’ve ever done.”

After two years at home, both artists have now resurfaced in a way that feels like a rebirth. Their latest records — Jacklin’s Pre-Pleasure and Sawayama’s Hold The Girl, released within weeks of the other’s — deal with the idea of reparenting. Coined by Dr. Lucia Capacchione in the 1970s, the term refers to the therapeutic technique of giving yourself the things you may have been denied as a child: love, attention, grace, patience, while also imbuing your adult life with childlike joy, curiosity, and play. The concept has seen a resurgence in recent years, with social media psychologists delivering reparenting how-tos, and the #reparenting hashtag reaching more than 100,000 uses on Instagram.

If Sawayama is giving her inner child a hug, then Jacklin is lamenting hers.

Sawayama’s Hold The Girl, out September 16, explores the concept of reparenting by serving as an embrace of her younger self; a musical ode to the magic of youth and the constant curiosity and excitement it brings. “Hey there, little girl, don’t you want to see the world?” she sings wistfully on the ethereal “Catch Me In The Air.” Her lilting vocals and the sweeping acoustic instrumentation mimic the childlike sensation of catapulting off a swing and flying through the sky. On the album’s title track, she suggests that, as an adult, she is yearning for the childlike wisdom she once possessed: “Reach inside and hold you close / I won't leave you on your own / Teach me the words I used to know / Yeah, I forgot 'em long ago.”

Different forms of family are a consistent theme on the album. On her song “Your Age,” Sawayama wishes she could better understand her mom: “Now that I’m your age, I just can’t imagine/ Why did you do it, what the hell were you thinking?” As she belts on top of crashing percussion and a growing electric guitar, the cathartic angst of the instrumentation mirrors the teenage passion behind the lyrics.

Songs on Hold The Girl also function as a retroactive embrace of the artist’s sexuality, rejecting the notion queer kids are taught that their identity will condemn them. “This hell is better with you / We're burning up together, baby, that makes two,” she concludes cheekily on “This Hell,” her Western ode to the queer community which mirrors her stunning 2020 track “Chosen Family.”

If Sawayama is giving her inner child a hug, then Jacklin is lamenting hers. Compared to Sawayama’s record, Jacklin’s approach on reparenting takes on a darker tone, revisiting the harmful lessons she was taught about sex, intimacy, and connection as a child.

From the album title alone, Jacklin introduces her listeners to a quiet double-entendre: Her childhood as a time of pre-pleasure refers to both the melancholia she expresses on many of her songs, and the period before significant sexual and romantic relationships. Much of the record focuses on her process of unlearning the rigid Christian ideals about sex that she was taught as a child. “I won’t feel ashamed tonight/ Forget all that I learnt tonight/ Ignore intrusive thoughts tonight,” Jacklin promises herself on “Magic,” a surprisingly sinister folksy mantra about getting over her anxieties around sex. On the searching “Ignore Tenderness,” she reflects on how she was taught to let men have their way with her while ignoring her own sexual or emotional needs, insinuating that these lessons continue to haunt her as an adult. “Right when the pleasure begins/ My education creeps in,” she sings.

Despite their upbeat, ‘80s pop instrumentation — a departure from Jacklin’s usual acoustic melodies — the songs on Pre-Pleasure simmer in their dark lyricism. Amid her troubled reflections on sex and intimacy, Jacklin sings openly about her fears for the future and her inability to form meaningful connections with people in her life. On “Be Careful With Yourself,” Jacklin pleads for her younger self to stop smoking, drive more carefully, and overall take life with a little more caution: “I’m making plans for my future and I plan on you being in it/ I’m just asking politely if you’d just try and be careful with yourself.”

Like Sawayama, Jacklin also laments her relationship with her mother. On “Less of A Stranger,” Jacklin sings about wanting to “know” her mother more intimately, making the track feel like a breakup song from a lover. When she whispers, “Oh I just wish my own mother/ Was less of a stranger,” it feels even more like a punch to the gut.

Rather than sealing up new cracks as they form, they’re returning to the source to relay their foundations.

When it comes to family, the albums feel to be in conversation with the recent work of Japanese Breakfast front-woman Michelle Zauner, who used her memoir Crying in H Mart to untangle the complicated layers of love and grief she felt for her mother after her passing.

“My mother had struggled to understand me just as I struggled to understand her,” wrote Zauner, 33, in the book. “Thrown as we were on opposite sides of a fault line—generational, cultural, linguistic—we wandered lost without a reference point, each of us unintelligible to the other’s expectations, until these past few years when we had just begun to unlock the mystery, carve the psychic space to accommodate each other, appreciate the differences between us, linger in our refracted commonalities.”

Like Zauner, Jacklin and Sawayama have gained newfound appreciation for the perspective and priorities that accompany motherhood as they’ve reached their thirties. But whereas Zauner feels she and her mother were able to begin “accommodating” each other, Jacklin and Sawayama seem to still be working through anger and resentment.

Jacklin and Sawayama are part of a wave of women artists making more introspective music after reaching their thirties. Adele, Mitski, Florence Welch, and others are all part of what Rolling Stone has dubbed the “new female frontier of emotional intelligence in pop”: women artists who switch gears from classic love songs or upbeat pop to more contemplative music as they age. While Jacklin and Sawayama, both 32, would fall neatly into that bucket, what separates them from the fold is how they’re using their music to communicate directly to their inner child; rather than sealing up new cracks as they form, they’re returning to the source to relay their foundations.

Hold The Girl and Pre-Pleasure are cathartic and emotionally murky in equal measure, as any attempt to reparent or connect with an inner child might feel. Sawayama’s record ends on a relatively optimistic note: “Open my eyes/ Feels like the first time/ That I finally know what it feels like/ To be alive,” she sings triumphantly on the album’s final track. Jacklin’s Pre-Pleasure closes more hesitantly: “All my words are caught up in a cloud/ You know someday you’ll have to say them out loud,” she muses on “End of a Friendship.” Reparenting is a process, one that always gets messy before any sort of happy ending. Maybe you have to mourn your inner child before, one day, you can eventually embrace her.

Julia Jacklin’s Pre-Pleasure it out now. Rina Sawayama’s Hold The Girl is out 9/16.