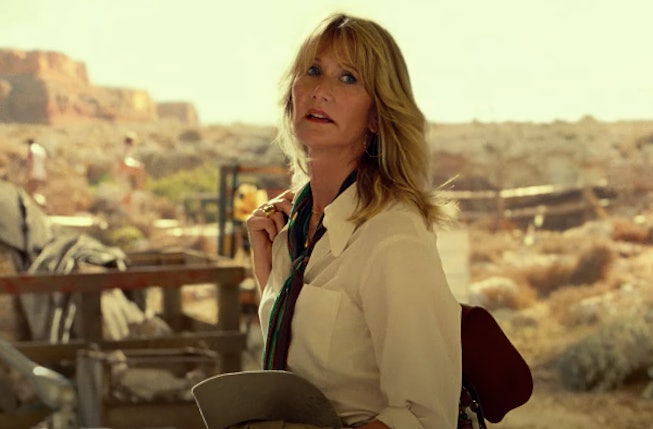 Laura Dern is making a triumphant return to the Jurassic Park universe, and from the looks of things her whip-smart guidance is desperately needed. The Academy Award-winning actress will reprise her role as Dr. Ellie Sattler from the 1993 original, to help save the world from a league of feral dinosaurs in the new film Jurassic World: Dominion.

The upcoming movie picks up right where Jurassic World: Fallen Kingdom left off. Set in the present day — about four years after the Jurassic World Theme Park was destroyed — dinosaurs now roam the world freely. In the last film the genetically engineered animals were auctioned off, leaving them without a team of scientists to regulate their behavior.

This decision, of course, comes with dire consequences. The trailer for Jurassic World: Dominion, opens with a shot of a snowy landscape that’s quickly overturned by a stampede of dinosaurs. With prehistoric animals galavanting around the planet the human species is forced to reckon with their misguided decisions.

The franchise's first film Jurassic Park was released 29 years ago in 1993. The movie was directed by Steven Spielberg, who has since passed the torch to a new generation of filmmakers. Jurassic World: Dominion was co-written by Colin Trevorrow and Emily Carmichael. Trevorrow also co-directed the feature with Derek Connolly.

If the first movie taught us anything, it’s that dinosaurs were never meant to exist in modern times. Seven films later and Laura Dern finally expresses what we’ve all been thinking. “Humans and dinosaurs can’t coexist,” she says in the upcoming film's trailer. “We’ve created an ecological disaster.”

Tasked with rewriting their wrongs, Dern reunites with the original cast. Sam Neil returns as paleontologist Alan Grant, Dern's colleague and budding love interest in the first movie, while Jeff Goldblum reprised his role as the mathematician, Ian Malcom.

Jurassic World: Dominion premieres in theaters on June 10th. Watch the trailer for their wild adventure, below.