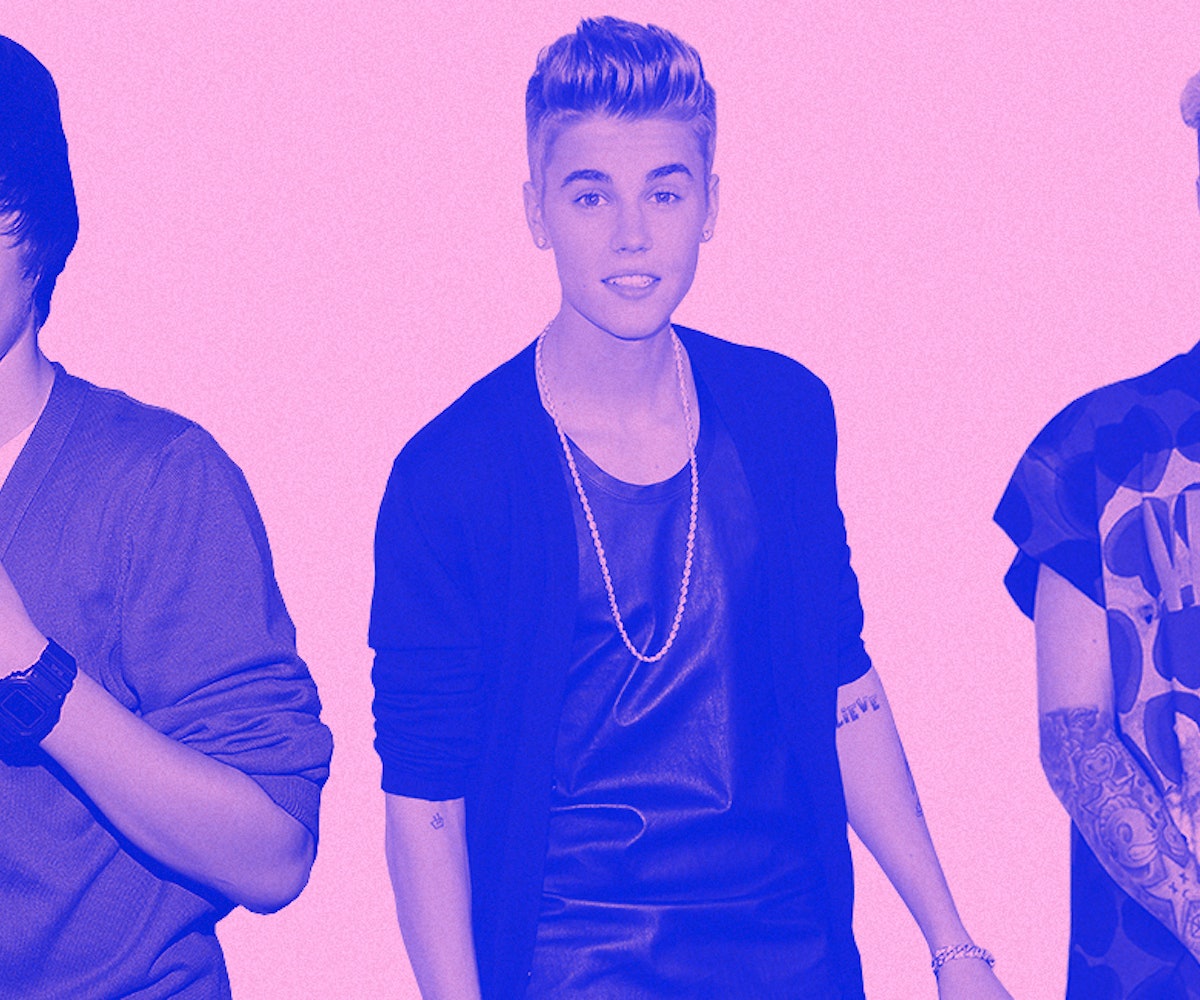 Look, I am just going to come right out and say it: I am a Belieber. In 2009, when I was 16, I tried to seem cool by telling people I listened to Animal Collective and Bon Iver. But secretly, I was listening to “One Time”—on repeat. I partied to “Beauty and the Beat” in college. I stuck with Justin Bieber and his rocky Journals/egging houses phase. As an adult, I have spent real money on things like Purpose (Deluxe) CD (the only CD I’ve bought in the last five years) and tickets to the Purpose Tour.

I’d like to think of myself as a connoisseur of all things bizarre and Bieber-related (i.e. his weird Instagram presence which I probably know way too much about). And so after catching wind of the existence of a Justin Bieber exhibit at a Canadian museum, I knew I had found my, erm, purpose and immediately hit the group text with: “Who’s down to go to Canada to fulfill my destiny??”

Luckily, a friend was in and thus “The Pilgrimage” was born. I would continue my near-decade-long tradition of spending my hard-earned money on Bieber, by traveling to his hometown of Stratford, Ontario, to see the "Steps to Stardom" exhibit at the Stratford-Perth Museum. And while I am not sure if two girls driving nine hours from NYC to Stratford for a weekend trip is really the Crossroads road trip moment I imagined in my youth—especially since there were no convertibles or crop tops involved, and only cold-weather puffers and custom JB t-shirts—it was still pretty great.

But that doesn't mean it was without some dramatic tension: After six hours of driving, a brief moment of panic set in when Canadian Border Control asked, “What do you plan on doing here?” No, the tension didn't involve hidden contraband. Instead, it existed because: How do you tell them that you and your friend—two 25-year-old women—are going to Stratford to see the Justin Bieber exhibit? We decided to keep that info to ourselves, and two-and-a-half hours later, just as snow began to fall, we arrived in Stratford.

I’m going to be honest, I was not totally familiar with Bieber’s upbringing. We all know that Usher plucked him from obscurity after seeing him on the internet, but that's the origin story of most global superstars these days. I had never thought much about where Bieber had grown up, and so wasn't prepared for the fact that Stratford was such a quaint town surrounded by miles of farmland. Everything in the town is named after Shakespeare and it features a beautiful historic downtown area on the water. Wasting no time, we immediately headed to the museum. The Stratford-Perth Museum is housed inside a lovely Victorian home dating back to the late-1800s with a larger structure in the back. At this point, the snow had really started coming down and it was apparent we were the only people visiting. (Of note: The museum is a real bargain at just five Canadian dollars, the equivalent of about four USD.)

Broken up into three segments, the Bieber exhibit occupies a large room in the front and two smaller rooms within a hallway.

The above quote is the first thing that greets you upon entry and is a great indication of the vibe of the rest of the exhibit. The front room is dedicated to his childhood in Stratford. Baby and family photos are on display. A poster displays a timeline of his musical journey from 1996 to 2007 when Bieber left Stratford. The main feature of the room is a drum kit given to Bieber through a fundraiser when he was eight years old. Original concert flyers describe him as a 10-year-old boy who “specializes in singing R&B and break dancing.” Does he ever!

This whole section feels deeply personal, but also contains a cardboard cutout of Bieber in front of a replica of the Avon Theater where he began his career, which feels... less personal. Interestingly, cardboard cutouts are a reoccurring theme throughout the exhibit.

The next room is jam-packed with personal items of Justin’s, including his first laptop, hockey gear, designer shoes, all-access tour passes, as well as some of the awards he has won. The trailer for the 2011 box office smash hit, Justin Bieber: Never Say Never, plays on an infinite loop, which is quite the ambiance-booster.

Three of my favorite items are displayed in this section. First, Bieber’s library card. Second, an original letter from Michelle Obama to Bieber circa 2010, thanking him for attending the annual White House Easter Egg Hunt. And then there's a Rubik’s Cube, “one of Justin’s favorite items,” which he was able to solve it in under two minutes!

Of note: There is no shortage of cutouts here, making me think the Canadian cardboard industry is thriving.

The final room is a little less densely packed and pays homage to Bieber's fans. One side of the room features an entire wall of bright neon hand-painted signs that were confiscated from his My World tour. This one sign, in particular, has really stayed with me. I think about it a lot.

The other side of the wall features more posters and a chalkboard wall where Beliebers can leave messages.

And then, finally, there was the pièce de résistance: a pair of Bieber’s underwear, somewhat weirdly displayed amongst fan gifts and original My World 2.0-era merchandise (it has taken great willpower for me not to search eBay for that singing toothbrush).

The exhibit ends with arrows leading to a screening of Justin Bieber: Never Say Never in a large back room that houses old fire department memorabilia. There is a box of tissues sitting on the mantle of the viewing area, which I can only assume are for when his live performance of “One Less Lonely Girl” gets a little too emotional. While I love a cinematic classic, we skipped the movie and wandered around the rest of museum, but I found it hard to concentrate on Stratford's history of railroads due to the high I still felt from hearing “Baby” and “One Time (Acoustic)” on repeat from the Never Say Never trailer, so we left.

The museum’s merch situation was not quite as robust as the streetwear-inspired Purpose Tour line. But for only one (1) Canadian dollar, I was able to purchase a map detailing all of Bieber’s favorite local spots in town. Most places listed are restaurants, including the spot where Bieber had his first date and the town's Subway, which the map informed me is his "favorite fast food restaurant." Eat fresh!

One of the most endearing parts of the whole experience was flipping through the guest book before leaving. The exhibit had been open for just about two months and already there were many messages from fans from literally all over the world who had come to this tiny Canadian town just for this. Mexico, Switzerland, Italy, and England are all represented. The handwriting led me to believe that most of the signees were under the age of 10. Which, I totally get, because if an Aaron Carter exhibit had existed in my youth, I know I would have been crying my eyes out begging my parents to take me to it. (But actually—can I curate that now?)

So, while "Steps to Stardom" might not have the grandeur of the David Bowie exhibit at the Brooklyn Museum, that's okay. There's enough room in the museum community for David Bowie and Justin Bieber. This is a hometown’s ode to their shining star. And in Bieber's own words, he was born to be somebody—somebody whose underwear is strangely on display in his hometown's museum.

“Steps to Stardom” runs through the end of 2018 at the Stratford-Perth Museum.

NEXT UP
Entertainment
Emma Chamberlain Is Officially Moving to Spotify On February 23 (Exclusive)
culture
Anna Delvey Is Getting A Reality TV Show
Entertainment
Is Rihanna’s Super Bowl Promo Hinting at New Music?
Entertainment
Gracie Abrams & Gia Coppola On The Joy Of Free-Flowing Collaboration
Style + Culture, delivered straight to your inbox.