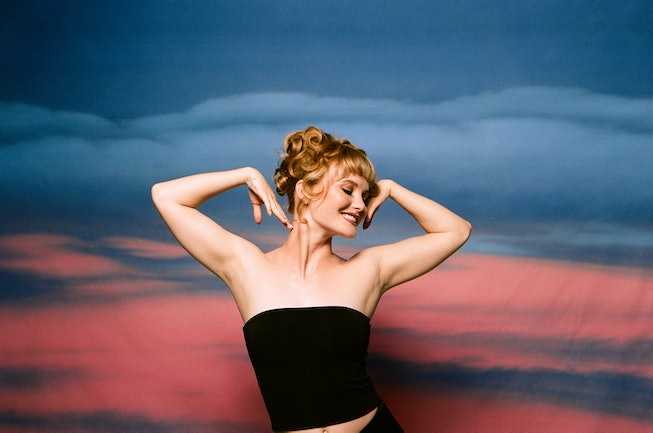 Hill continues mining that sound on “Seasons Bloom,” the sweet lead single from a new album arriving later this year. This time, she worked with producer and composer John Carroll Kirby, musician Ariel Rechtshaid, and Jim E-Stack, to craft the gently bopping track — a “sweet lil love song,” she says — about experiencing the world anew after falling in love. “And it's all the world that I could want/ You make me feel like I belong/ And it’s all the world that I could want/ Seasons blooming in your arms,” she sings in her delicate falsetto. It’s a song for all seasons though it probably sounds the sweetest during the these last lingering moments of summer, which makes Hill’s timing perfect.

The song arrives with a charming video of her wandering and dancing through Joshua Tree. Watch it below, and read on for a conversation with Hill about “Seasons Bloom,” her upcoming album and playing live music again.

I am sitting on my couch typing answers to an email interview while the very end of a candle burns and I listen to a distant leaf blower outside.

How did "Seasons Bloom" come together?

It was the second time John Carroll Kirby and I worked together. I brought Jim-E Stack into the studio that day as well so we could get some extra vibes because the first time JCK and I worked together, we ended up with a few five-minute-long off-the-grid piano ideas. While those were very inspiring and a promising start to a fruitful working relationship, it was nice to have Jimmy bring some more focused energy in with us. We drank a small amount of mushroom tea and started jamming out a few ideas. Jimmy picked up the electric bass because even though he didn't really know how to play it at the time. He always ends up holding instruments and tinkering around if he's not at the computer. He plucked out a few notes and John added some synth stuff. It was a really rough idea, but I took it home and deconstructed the session in my room and laid out melodies and structured out the song. JCK gave it some new chords. At the time of my deconstructed demo it barely had music under it). Jimmy produced it out some more. Ariel Rechtshaid gave us some chord switch ups and some extra sauce that gave it a lil more life and then we shined it up to sound like the beauty she is today.

This song is coming off your upcoming new album. How do you think "Seasons Bloom" reflects the rest of the project?

It's one piece of an 11-song body of work that I think covers a lot of ground with how I've felt over the past couple years. "Seasons Bloom" is the sweet lil’ love song moment.

Have you started going to any live shows or concerts? If so, tell us about a recent one you really enjoyed.

I have seen one single live show since the pandemic and it was John Carroll Kirby at The Lodge. It was excellent. It was funny to go to a live instrumental show in L.A. because usually crowds here are very jaded and unenthusiastic, but I think everyone had been cooped up for so long that we were all ready to absolutely rage at this jazz show. I'm excited to play shows in the near future though.

Since you didn't get to tour or perform your last album, which song or songs from that project are you most excited to play live?

I don't have a specific song that I'm looking forward to playing. I'm just excited to finally be able to feel the energy of a real reaction from the music; it's not as easy to understand which songs resonate most with people over the internet as it is in real life. I'm also excited to finally get to meet fans I've communicated with online for so long and gotten to know. They're good eggs.