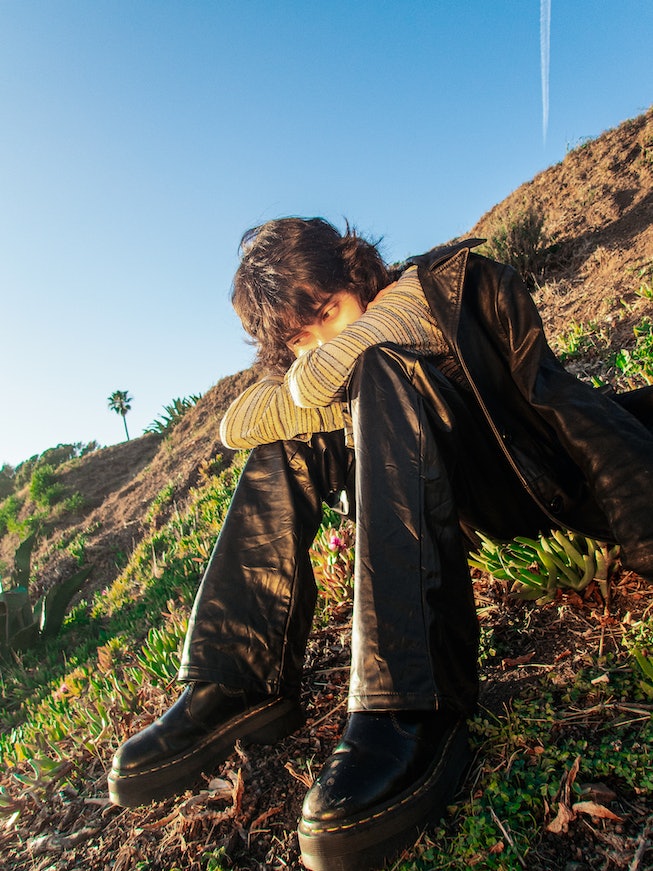 Los Angeles teen Kali Flanagan makes scrappy but jubilant indie rock that’s some of the most exciting we’ve heard lately. The 16-year-old singer-songwriter and guitarist may still be in high school (and hating precalculus), but her music seemingly sprung forth fully formed. She released her first-ever song, “Back To The Start,” in the fall of 2020 — a glowing, lovesick tune about falling back in with an old flame, propelled forward by gnarly guitar riffs. The lyrics are sparse — “It hurts too bad to live in the past / But you keep pulling me back to the start,” goes its hook — but most of the song’s addictive whirling energy comes through in the emotions of her guitar.

As KALI, Flanagan is now readying her first project, the EP Circles dropping May 7. She shares its latest single, “I Just Wanna,” on NYLON exclusively below alongside its music video. A groovier and dancier track from her previous work, “I Just Wanna” pairs neon synth melodies with impatient lyrics about wanting to be with someone again. In the video, directed by her friends Sophia Ziskin and Zealand Yancy, Kali runs through the streets of LA while bathed in magenta light, capturing the restlessness of growing up.

Over email, Flanagan says that she wrote “I Just Wanna” when she was grounded at home and came up with the chord progression. “The song was symbolic of my physical experience of being grounded,” she writes. “At the same time, it represents the emotions towards someone who wouldn't give me the vehicle to express my feelings for them, who I was unable to see at the time. I wrote the second verse months later after I was feeling a different kind of emotion, leaning more towards resentment and bitterness, which makes me feel a little bad when I listen back, if I'm being honest.”

Listen below and read on to learn more about KALI, from growing up in LA to getting complimented by Weezer’s Rivers Cuomo.

I just finished my homework and am currently standing in my bedroom staring at my dog who is sitting on a boogie board in my backyard trying to figure out what to do next. I am surrounded by my extensive notebook collection, my space heater, a broken dresser that does not have a third drawer, and the artwork around my room from artists Christine Owens, Danny Cole, Tony Camaro, Bijan Berahimi, and Sanjay Patel, as well as some vintage posters from used vinyl that my Grandma has sent me.

What was growing up like in Los Angeles? What music did you listen to?

Growing up in LA has been such a trip. I think because of the nature of the city (or lack of it) and the superficiality that sort of masks the nuggets of beauty, I grew up learning to trust my instincts and focusing on what ambitions I genuinely was passionate about.

I grew up listening to a lot of different kinds of music. My mom used to volunteer at KCRW so I listened to a lot of what was playing on there. I was also heavily involved with classic rock music from a young age. I fell in love with the Beatles at the same time I first heard Amy Winehouse, and later my taste expanded to Alabama Shakes, No Doubt, Pharrell (especially the Despicable Me 2 original soundtrack), Pixies, the Cure, David Bowie, and Prince. When I got to middle school my interest in the indie boom of the 2010s went ballistic and kind of triggered my interest in making my own music. When I was younger I feel like there are so many things that only someone growing up in LA could have experienced. One of the most "LA" things I don't tell people is that Rivers Cuomo complimented my guitar playing at my first recital.

You have such an ear for memorable guitar riffs; is there a guitarist you really look up to?

I think I've always admired Albert Hammond Jr. What draws me to his guitar playing is his ability to draw such painful and joyous emotions through his riffs. I feel like he's had a huge influence on my approach to guitar being this sort of orchestral instrument; I approach it more similarly to a violin, because that's the impact I want it to have on the listener. I spent a good chunk of my early high school school playing a ton of neo-soul bass lines from [Erykah] Badu to Tom Misch which got me hooked on rhythm and that style of music, which makes my heart melt. That sounds so cheesy but it is what is.

I really admired Melanie Faye, I even took a guitar lesson from her. I still haven't heard anyone play guitar so melodically and with the same feel and pocket as her.

I'm still technically in high school, but I try and do as little of it as possible. I really do enjoy learning, but on my own terms, and excluding precalculus. I read a lot. I'm currently reading Just Kids by Patti Smith for the second time and Notes and Tones by Arthur Taylor. I really like to do yoga as well. It lets me sit with the silence and calm my inner monologue which does not have an off button. I also have been watching a lot of interviews on Youtube. My favorites right now are David Bowie, Michaela Coel, and Kerwin Frost. When I'm not by myself, I spend a lot of time with my besties going on long walks, picnics at the park, listening to “Boyz” by M.I.A. on Sunset Blvd, going to lookouts, etc. I also shot all of my music videos and photos with my friends Zealand, Trixie, and Sophia which I have had so much fun doing.