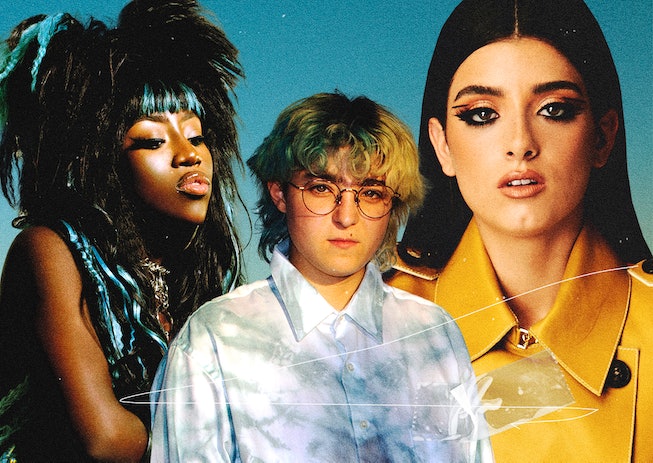 Despite it being dismal year for live music, 2020 was rife with music discovery and new artists to get excited about, from the revitalized pop-punk of Fueled By Ramen's newest signees Meet Me @ The Altar, to the intimate poetry of singer-songwriter Arlo Parks.

Below, we've rounded up the 14 new acts that caught our eye this year, spanning the genres of R&B, pop and rock to dance and experimental electronica — there's something in here for everybody.

Who: Formally known as Toast, the NYC-based 21-year-old (and close friend of Clairo's) has quietly been releasing bedroom bops for the past few years. Recently, they became the first artist signed to Phoebe Bridgers' label, Saddest Factory.

What: Soft pop that often broaches subjects of identity, belonging, and new crushes.

Who: The 15-year-old North Carolinian just started making music at the beginning of quarantine, and has already emerged as a promising figure in the newly cohered hyperpop microgenre.

What: Songs about age-old teenage problems filtered through the internet's hyperactive soundboard.

What's next: TBA, but he released his debut EP, Cypress Grove, this year.

Who: The U.K.-based British-Jamaican boasts big, classic vocals that have made a resounding splash in her home country. She's already worked with FINNEAS, and at the top of 2020, she received the coveted BRITs Rising Star award (Jorja Smith was the recipient in 2018).

Who: The 21-year-old singer has come a long way since Justin Bieber first discovered her bedroom song covers on YouTube when she was 13. After years of dropping loosies and an EP, she's finally ready to make her formal introduction.

What: Tween radio-friendly pop has fully morphed into stadium-sized bangers that are not afraid to play with darker aesthetics.

Who: The Kansas City trio of friends — Ty, Deiondre, and Gabe — officially stepped onto the scene in 2019, but have already churned out three projects. Their latest one, Whatever, Man, was released via Dirty Hit, their new label, and home of The 1975, Beabadoobee, Pale Waves, and more.

What: Effortlessly cool pop-rap collages that play off Y2K and millennial nostalgia, in a way that doesn't feel tired or pandering.

What's next: TBA, but at the rate they're going, there's surely something new on the horizon.

Who: The older half of TikTok's reigning royal duo, and new singer in her own right.

What: Fun, classic pop with a capital P that's unafraid to broach topics of depression (most notably in her latest single, "Roommates," written by Demi Lovato) and general Gen Z malaise.

What's next: TBA, but she recently shared the single featuring Wiz Khalifa, "One Whole Day."

Meet Me @The Altar

Who: Meeting via the internet, the three members of the all-woman band have been dropping vibrant pop-punk bangers since 2015. “We wanted to see a band that looked like us on those stages and we went out there and did it," says guitarist Téa Campbell in a recent NYLON interview.

What: Earnest and all-in pop-punk backed by warm lyrics of inclusivity, growth, and comfort.

What's next: TBA, but they were recently signed to Fueled By Ramen, Paramore's label.

Who: The rising U.K. singer and rapper pairs her bold tunes with aesthetics that invoke the intricate world-building of pop superstars. She's collaborated with other genre vanguards, Rina Sawayama and Yung Baby Tate, and even the Missy Elliott.

What: Runway's YouTube description puts it best: "it's like lady gaga and lil kim had a love child."

What's next: TBA, but she recently put out an EP called 2000AND4EVA.

Who: The Londoner and poet-turned-songwriter had a major 2020, and can already count Billie Eilish, Phoebe Bridgers, Angel Olsen, and Florence Welch as fans.

What: Confessional and tender, Parks' guitar songs are set apart by her writerly storytelling and lithe vocals.

Who: Not too much is known about the 16-year-old musician, but a search on YouTube shows she's been playing in her local scene, and notably, her science teacher is a fan.

What: Scrappy, energetic rock driven by sharp guitar melodies that get stuck in your head.

What's next: TBA, but the young musician's first-ever release has us excited for what's coming up.

Who: The Brooklyn-based four-piece — made up of frontwoman Mia Berrin, bassist Mari Alé Figeman, drummer Shelby Keller, and guitarist Alex Mercuri — has been a fixture of the city's DIY scene since 2017.

What: True, shreddy guitar-rock that's not afraid to get noisy.

Who: The lime-haired Brooklyn native has been releasing music since 2017, pulling inspiration from her familial roots in Jamaica and Trinidad and Tobago.

What: Alt-R&B that flirts the boundaries of dancehall, soul, and more recently, emo-tinged pop.

What's next: TBA, but she recently shared her sophomore EP, Phenom.

Who: A classically trained DJ and producer who's become a burgeoning figure in the Bay Area's club kid scene.

What: Industrial and atmospheric dance music that pulls from footwork, R&B, club and orchestral music.

What's next: TBA, but Xyla dropped her debut album, Ways, in October.

Who: You may better know the Toronto-based electronic artist as a co-founder of this year's hottest Zoom destination, Club Quarantine.

What's next: A remix album of MQ's debut project, babycasey, is arriving in early 2021.