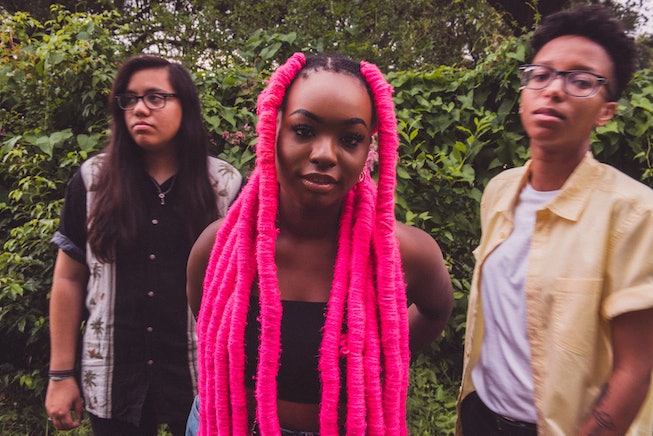 The pop-punk heyday of the mid-aughts was largely, for lack of a better term, a sausage fest. Just look at any Warped Tour lineup from 2003-2009, and the amount of testosterone is truly astounding. The one beacon of feminine hope? A then-teenaged firecracker of a singer named Hayley Williams.

It’s no surprise that the Paramore frontwoman can be traced back as the earliest inspiration for all three members of Meet Me @ The Altar, an all-female pop-punk band that has been making waves online since its inception in 2015. As devotees of the scene themselves, they are all too familiar with how rare it is to see a woman front and center onstage — and that’s what they’re hoping to change.

The origin story of MM@TA, as they’re widely known online, is very 2020. In 2015, drummer Ada Juarez was posting YouTube drum covers of her favorite songs from her home in New Jersey. Miles and miles away in Florida, guitarist Téa Campbell noticed. She reached out to Juarez, and soon became quick friends. They decided to form a band. From there, they found — again, online — singer Edith Johnson, who was at the time based in Georgia.

The trio bonded over their childhood love for the pop-punk genre. “I remember being nine years old and testing out speakers for my birthday party and my dad putting on ‘In the End’ by Linkin Park ... immediately I was like, ‘Wait a minute.’” says Juarez. “Then I grew into Green Day, then Paramore, then that was it.” The genre may have died down in the past few years, but the trio knew this is what they wanted to bring back. They started working remotely, each in their respective homes, to cobble together songs they were proud of. “I remember when we first wrote ‘How Could We Ever,’ and I was trying to explain guitar parts with my voice,” says Johnson. “I would send voice memos — and you guys got it.”

Shortly after Johnson joined the band in 2017, they put out their first EP Changing States. It wasn’t until a few years later that they got their big break: In October of this year, they signed to Fueled by Ramen, the leaders of the pop-punk scene and former label of many of their inspirations. “There’s been a lot of full-circle moments for us, especially with Twenty One Pilots because we started doing covers of their songs,” says Juarez. “Now they welcomed us to joining the same label. Like what? How?” There’s a general consensus of incredulousness. “I don’t think anything is real because quarantine is so weird,” says Johnson. “I feel like we’re in a dream. Once we have shows again, it will feel real.”

With their music, the band hope to re-energize the genre that they love so much. “Pop-punk is upbeat, it’s fun, but we still write about stuff that matters,” notes Campbell. “It’s not the same topic over and over.” Adds Juarez, “It’s very real. There’s a lot of vulnerability in pop-punk.” There’s also fun, as evidenced in their first music video for the searing single, “Garden,” creative directed by Lindsey Byrnes. “We try our best to be the band members that we’d want to see,” explains Campbell.

Currently, the trio are quarantined together in Florida, working on their new EP and dreaming of what comes next. Their mission to make the pop-punk scene more inclusive remains as steadfast as ever. “When I was 15, I’d be at a show every single night,” says Johnson. “The Atlanta scene is really big. And yet, I didn’t see one woman [singer]. I didn’t see one Black person. At all. I was annoyed at the lack of representation. Every show was just white men, white men, white men.” They’re optimistic that can change. “I want our band to show that anybody can do anything they can put their mind to,” says Campbell. “We wanted to see a band that looked like us on those stages and we went out there and did it. We want all the little brown girls out there to stay ambitious and to know they can do it, too.

“Some people won’t like it because of who we are,” she continues. “We’ve accepted that and we’re okay with that. Because it’s going to mean so much more to other people ”