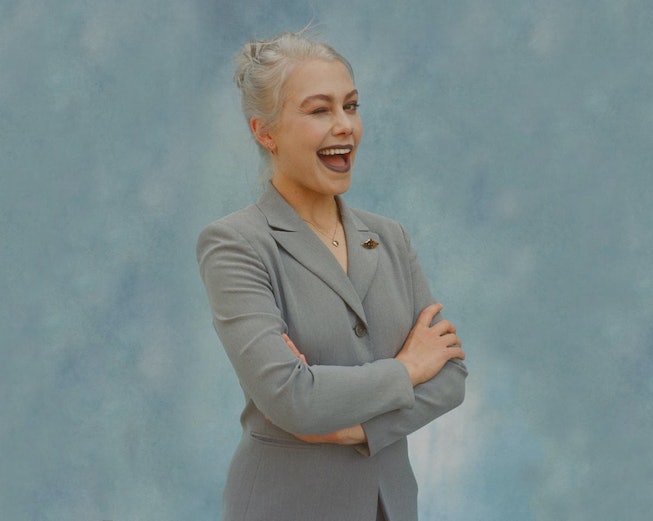 After doing it all during quarantine — including placing the entirety of the world in its feelings with her latest album, Punisher — Phoebe Bridgers announced that she's starting her own record label. Working in partnership with Dead Oceans, the label home to her previously released records, Bridgers announced the formation of her label, Saddest Factory.

Sharing the news in an interview with Billboard, Bridgers touched on the personal importance of this moment. "It’s always been a dream of mine to have a label, because I’m also such a music fan," she said.

Touching on how COVID-19 has impacted the music industry, she detailed some of her hopes for the label's future, saying, "One of my favorite things about this time is that everybody is listening to records faster, making tons of playlists and doing dance parties in their houses. I felt like if there's cool stuff, I want to get it going and get it out to people as fast as possible."

The label's name also comes with significance, Billboard reports. It's intended to be a purposeful mispronunciation on the word, satisfactory, a term often used in the music industry.

Bridgers confirmed that one act was already signed, and an announcement is expected on the signing in the coming weeks. As for what type of music grabs her attention, or what fans can expect of Saddest Factory signees, Bridges already has a pretty solid idea of direction. "If I like it and I listen to it for pleasure, then other people will like it and listen to it for pleasure. I don’t think I have any ethos other than, 'Am I jealous?,'" she said. In a press release, she said that the "vision of the label is simple: good songs, regardless of genre."

For now, Bridgers is already brainstorming, telling Billboard that she's ready to get down to marketing. "I love thinking of bus bench ideas and Instagram filters and stuff. It’s very corporate of me, but I’m kind of obsessed," she said.

NEXT UP
Nylon Nights
A Night Out With Uffie
Entertainment
How K-Pop Learned To Market The Girl Group
Entertainment
The Meaning Of Harry Styles' "Matilda" Lyrics Goes Deeper Than Parent Issues
Entertainment
Singer Songwriter Rachel Chinouriri On Her Intimate New EP, 'Better Off Without'