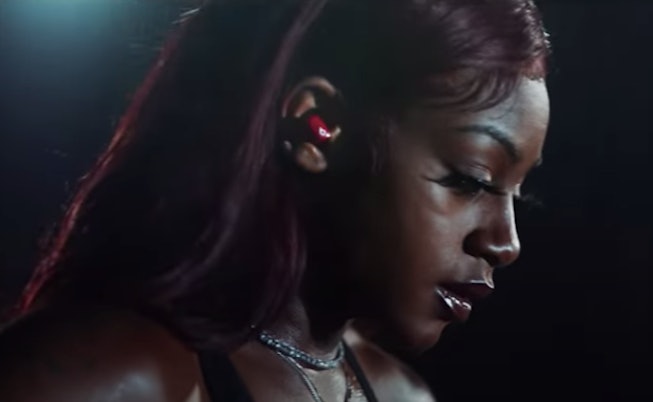 Kanye West announced his new album, Donda, with a heartfelt ad featuring track-star Sha’Carri Richardson. The quick commercial was produced by Dr. Dre then edited and scored by West, according to The Hollywood Reporter.

In the video, we see Richardson preparing to run while lyrics from the unreleased Kanye song, “No Child Left Behind,” echo in the background. While Richardson looks towards the sky, West raps, “Back again I use my back against the wall/Never called on ya’ll, never count on ya’ll, I always count on God.”

Richardson recently qualified for the U.S. Olympic track team after running a 100 meter dash in 10.86 seconds, making her the fastest woman in America. But after testing positive for marijuana in a drug test, she was removed from the team. After the news broke, Richardson revealed that she used weed to cope with her mother’s untimely passing. Since then, she’s publicly accepted her punishment and asked for people's understanding, tweeting, “I am human.”

The incident prompted a larger discussion about several topics related to the Olympics and race, with many athletes and public figures coming to Richardson’s defense, and others questioning the Olympic policy of testing for marijuana, a drug that is now legal in many parts of the United States.

West’s video ends with a title card that reads, “Live Your Truth.” But before the video completely cuts to black, he announces the album’s listening party. The event is being held in Atlanta, and live streamed on Apple Music this Thursday, July 22nd, at 8pm ET. The project, which is West’s 10th studio album, will reportedly be released on streaming Friday the 23rd.

Tune in tomorrow to hear the rest of Donda, and watch the promo video below: