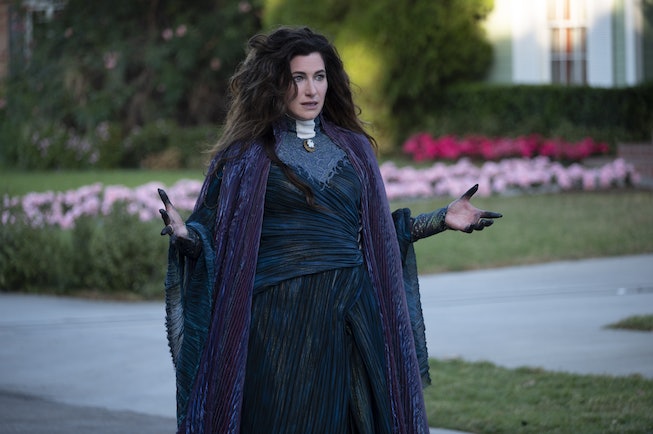 Marvel’s superhero-comic turned television sensation, WandaVision, may be getting a spin-off starring Kathryn Hahn in the near future. The hit series, which racked up 32 Emmy nominations this year, is reportedly working on its’ next chapter. The untitled, yet already highly-anticipated, project is currently in development at Disney+.

If green-lit, the series will be helmed by the original series writer, Jac Schaffer, who will serve as the head writer and executive producer of the spinoff. Following WandaVision’s success, Schaffer signed an overall deal with Marvel and 20th Television. If the spin-off goes to market, it will be the first project created under their deal.

Schaffer’s WandaVision was an interpretation of the original Marvel comic-book series. It followed Wanda (Emily Olson) and her husband Vision (Paul Bettany), a seemingly typical couple with superhuman abilities. The series ran earlier this year from January to March and amassed a loyal fan base, while receiving a 91% approved rating from television critics on Rotten Tomatoes. The show also featured Kat Dennings (2 Broke Girls), Evan Peters (American Horror Story), Teyonah Parris (Candyman), and Randall Park (Fresh Off The Boat) as series regulars. However, Disney+ has not confirmed if their characters are a part of the spin-off.

What we do know is that Hahn will reprise her role as Agatha (Agnes) Harkness — which she received an Emmy nomination for — the Vision family's nosy neighbor-turned-nemesis. The last time we saw her character was in the season finale of WandaVision when Wanda permanently traps Agatha in Westview, as her powerless alter-ego, Agnes.

While the spin-off remains in the development stage, Hahn is keeping busy with other exciting projects. The actress is set to star in a new limited-series on Showtime, inspired by the late, iconic comedian, Joan Rivers. She is also currently working on a series with Apple called “The Shrink Next Door.” According to the log-line the show explores how a “seemingly normal dynamic between a charming psychiatrist and a longtime patient morphs into an explosive relationship filled with manipulation, power grabs, and dysfunction.” Hahn is also a part of the highly-anticipated whodunnit blockbuster, Knives Out 2, starring alongside Daniel Craig, Kate Hudson, Janelle Monáe, and Madison Klein.

While we wait for more details on the (hopefully) upcoming spin-off, catch up on the first season on Disney+.