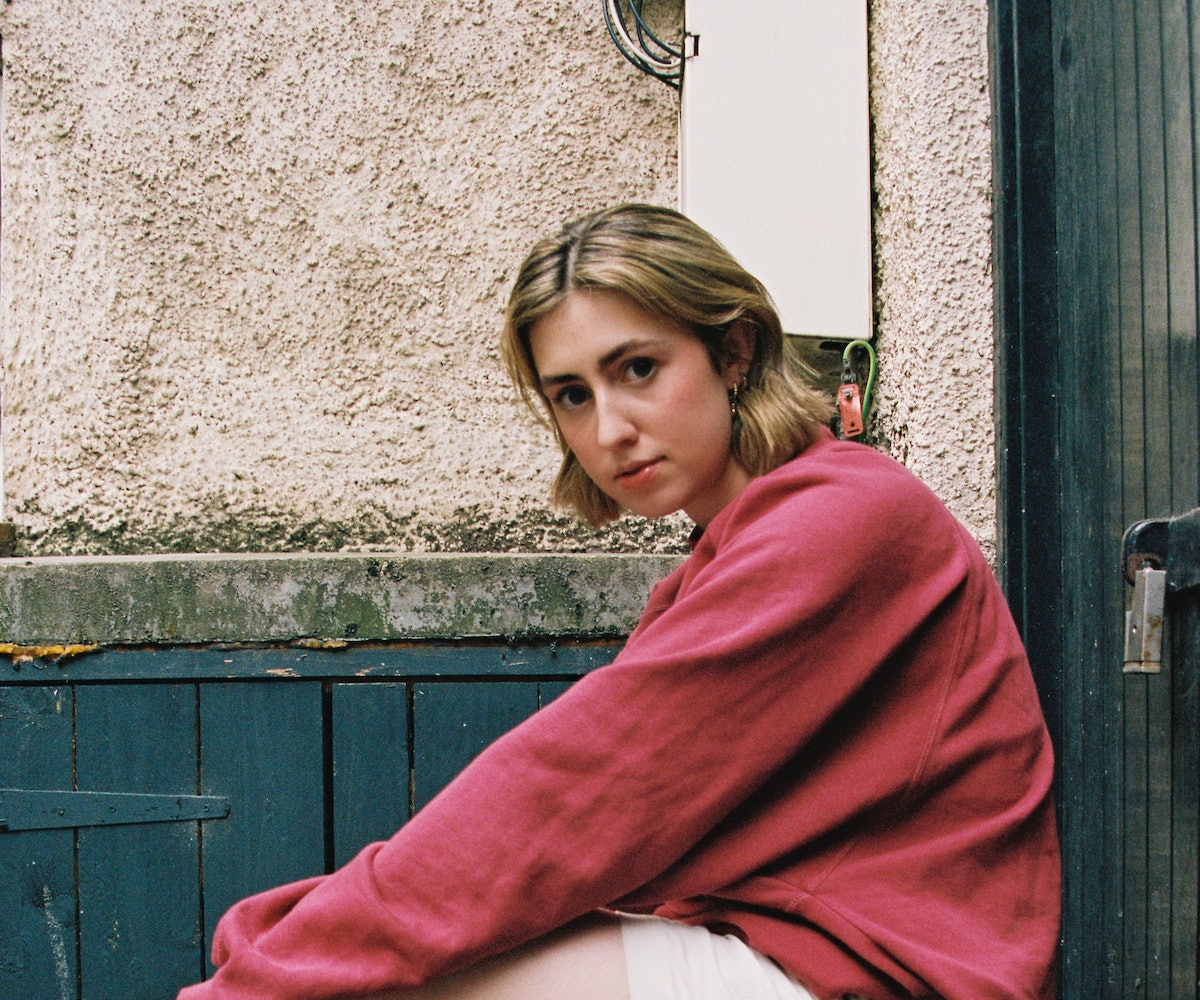 The inescapable and devastating lyrics, “I’m wearing his boxers/ I’m being a good wife/ We won’t be together/ But maybe the next life,” are the chorus to “complex,” the viral single by 21-year-old singer-songwriter Katie Gregson-MacLeod. You might’ve heard it; For the last few weeks, the Inverness, Scotland-native has been capturing heartstrings across the internet with the piano ballad on TikTok, garnering over 7.2 million views, and the unofficial dub of being the next “drivers license” sensation.

The crux of the viral track hinges on Gregson-MacLeod’s songwriting, which is as dynamic as it is honest as it meditates on the pitfalls of complicated love. When she uploaded her clip on August 4 she “never expected” for it to go viral — “I literally wrote the song three days before putting it online,” she tells NYLON — but “complex” has since crowned Gregson-MacLeod as the new face of sad girl indie music. Within mere weeks, Gregson-MacLeod landed a record deal with Columbia Records, and piqued attention and acclaim from veterans in the industry through TikTok’s Duets On feature; Camilla Cabello, Fletcher, GAYLE, King Princess, and others have written their own lyrics to accompany Gregson-MacLeod’s haunted chorus.

After much anticipation, Gregson-MacLeod unveiled the full version of “complex” as a demo on August 26. Days after its release, NYLON caught up with the singer to get a peek into the whirlwind she’s experiencing with her newfound recognition. Below, she touches on her love for Phoebe Bridgers, the story behind “complex,” the victim and savior dynamic, and her process for writing heart-wrenching lyrics.

How did you start writing music?

It’s one of those cheesy lines, but I think I’ve written for as long as I can remember. If it wasn’t songs, it was just little poems and things when I was a kid. I remember my first song; the one that I can remember was when I was seven or eight and we actually found a video of it, of me playing the guitar and singing that song when I was eight and I was like, “I could put that out on a record now.” I started to really write a lot more when I was 17, 18 and I was experiencing real life for the first time and relationships and these things.

My main inspirations as a writer are… I listen to so many different kinds of music and I think it all kind of seeps in in terms of influences, but as everyone else, Phoebe Bridgers is just an absolute God. Julia Jacklin. Lucy Dacus. Matt Maltese. And like overarching ones that have been such a pinnacle are Joni Mitchell, Leonard Cohen, Elliot Smith.

What was the process behind coming up with the “complex” chorus?

That’s a funny one. It’s all a bit of a blur. It was all this one moment— an evening. A very quick write and raw, emotional moment. The chorus is purposefully erratic and purposefully using cliché lines to try and kind of pinpoint this feeling of realization and resignation to some roles that have been adopted up to that point subconsciously. But then that moment of realization that you’ve fulfilled all these roles for people without even realizing and you’re now left with the emotional burden of it. It’s a list of statements; it’s not supposed to sound very cohesive, all of it.

I don’t even remember super well writing the whole song, but I remember certain thoughts going into the chorus. There’s certain lines that are sorta cliché like being the “cool girl,” or, “needing him like water.” These are things that are quite obvious statements, but I think contextually it’s trying to evoke that feeling of, like, becoming a cliché or adopting a role you really shouldn't be — which is an absolute doormat.

Your lyricism is devastating and powerful. Could you speak on what complex love looks like?

[Laughs] That’s the song. It wasn’t a conscious decision to portray what this looks like. For me, it’s that self-doubt, and doubting your own reality and what you held as principles before this. In the situation I was talking about in the song, you bend your boundaries and you bend your sense of self around someone else, around their person, around what they are doing for you, around what they’re not doing for you.

There’s also a side of it: are they doing it on purpose? Are they not? This song isn’t just about a savior complex. It’s just as much of a victim complex as it is a savior complex. How much of this is self-imposed? And how much of it is someone just being a dick, basically? There’s patterns in my life and maybe I should own that. It’s holding accountability and resigning to the fact that you’ve let other people tread on you for so long.

Why do you think it resonated with so many?

This is the question, isn’t it? I would have never expected it, really. What I hope and what I think is that it resonates because it’s just very unguarded and raw. For me, anyway, I didn’t even think deeply about a song that was going to sound a certain way. It literally just poured out. It was an evening of being in that emotional state.

What’s it like to have such vulnerable lyrics go viral?

It’s really strange. I don’t really mind sharing that raw and vulnerable stuff. But it’s really funny when you put your own emotions and life into the world like that and people will inevitably impose their own ideas upon your words from either their own perspective and what that means to them, but also will do guesses of what it means for you. It’s really quite an honor for people to be reading my lyrics with such depth.

“People have really rallied behind me. I’m part of the army, you know? I’m usually doing the commenting and stuff.”

How does it feel to have your music categorized as “sad indie,” “lyric therapy,” and, “sad hour,” on Spotify?

I’m a big sad girl indie listener. I don’t mind that. It’s becoming a genre of its own. It’s literally like, “sad girl” is now a thing. You don’t want it to be completely just that, “Oh, this is just for sad teenage girls. It’s going to be mainly that.” It will be that which I like as long as it’s able to branch out.

How do you go about writing lyrics for a song? Do you have a particular method or is it different every time?

Lyrics are my favorite part. I tend to write the melody and lyrics at the same time. Although I love writing words, I find it hard whenever I write words to then put a melody on it. I write words whenever I write melodies, I guess. Usually what happens is I think of a concept, or an idea, or a line, or a word even that I want to use and it grows from there. I try not to filter too much what I write. If a line comes out and fits that moment I try not to edit too much. Maybe that’s what it was meant to be. It sounds very hippie, but maybe that was the line that was meant to come next in that emotional state.

What was it like having so many big artists write in their own parts of the song through Duets On?

It was very insane. It was insane they even knew the song, or heard the song, or even knew who I was, let alone covering it and then doing rewrites. It’s such a strange phenomenon, hard to get your head around. Some of them have been so good. And then some of them have been, oh my god, it’s too good. It’s too good. [Laughs] Reign it back in, I still need to release the rest of the song, guys. Some of them I’m like, “They actually ate me up there, but go off.”

Yeah. Maybe not building it myself. But being welcomed in and being really supported by an existing community of people on that platform that love lyrics and that love songwriting. People have really rallied behind me. I’m part of the army, you know? I’m usually doing the commenting and stuff. Having the absolute TikTok Sad Girl army coming to my support is lovely.

What was your decision making by labeling the release of “complex” as a demo?

This version had to come out. This super raw, very much untouched, bit of mixing [version], because I’ve been on TikTok and I’ve seen it happen a thousand of times with versions of songs. People on TikTok can be very purest. [They] really want it to be exactly how they heard it in the video. Both for them, and for myself, I wanted to do a raw moment before releasing a version with more arrangement and strings.

Are you working on new music? What can we expect from you in the future?

Always. Yeah, I had an EP planned to come out next February. I had a seven-track EP which I had been making for the last year and a half. That was the plan, but obviously plans are being re-evaluated right now. Those songs still stand, and I’m still a fan of those songs, but the scope for an album is there and there’s new opportunities to collaborate. I’m constantly writing and looking to the next thing musically.