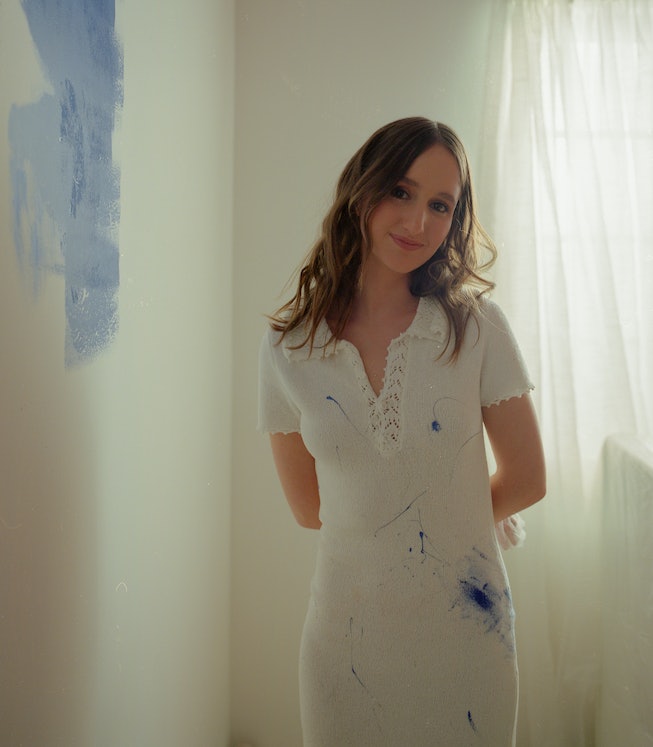 If you’ve been on TikTok, you may already be familiar with Sadie Jean. The 19-year-old Orange County native’s first-ever song “WYD Now?” has become a certified sensation on the app, thanks to the power of the open verse challenge — a TikTok format that invites other creators to duet with her during an instrumental opening on her song. Her song, a delicate and pulsing pop ballad about wanting to reconnect with an ex, gleams from her crystalline voice, a strong and silvery force that can’t help but grab your attention. And it did on TikTok: after putting out an open-verse call for the song in late 2021, a host of comedians, singers, and rappers, including Lil Yachty, have taken on its challenge, turning “WYD Now?” into a veritable phenomenon.

Now with millions of streams to her name, Jean is premiering the track’s music video on NYLON. In the simple Jaqueline Dufwa-directed visual, she lounges in her bedroom as memories of her last relationship replay around her, wondering about the fate of her former flame and ​​bringing the song’s gently inquiring premise to life: “You're still everything I want and/ I think we could work it out/ So what are you doing now?”

“I was just so emotional about this breakup that happened like six, seven months [ago],” Jean tells NYLON of writing “WYD Now?” which she originally penned during a writing trip with friends Grace Enger and David Alexander in upstate New York. “I was still so sad about it and [Enger and Alexander] knew everything about it because we had written so many songs about it. We just started writing and it became a song about wanting to reach back out.”

Ahead of its video release, NYLON caught up with Jean to chat about the song, the power of the open verse challenge, whether she ever ended up sending the track to her ex, and what’s coming up for the 19-year-old song-maker.

How did you begin writing music?

It's been like my whole life leading up to finally having a song out. I started writing songs before I could even really write. I remember I would just sit in the car... I'm from Orange County, California, so it's just so much traffic, so much driving all the time. I grew up just running errands with my mom in the back seat. The radio would always be on but eventually I would make my mom turn off the radio and be like, "It's Sadie's radio," and I would just make up songs for however long we were in the car. This was when I was like two or three, I would make my sister write them down for me because I couldn't write. Eventually, I learned, I became literate. I would write them down, learn piano, and started actually writing songs in first grade. Then I just did it all the time. And I still have all my songs, I have so many notebooks.

It was just this thing that I didn't really think anything of, until junior year of high school when people started talking about college. I was like, "Oh my god, I don't wanna go to business school or study anything else." I was super secretive about music so no one really knew about all of this. I was so private about it it was so weird.

I’m guessing you never performed in front of people, either.

What got you out of your shell?

My brother, actually. I took a leap of faith and sent my closest friends a video of me singing a cover song of "Creep" by Radiohead. They freaked out like, "You can sing?" Because I would purposely sing bad in front of them in the car. I was like, "Yes." And they were like, "You have to show people, you should post this!" They totally peer-pressured me into posting it, so I put it on my Instagram. It's still up, my first post. Then my brother saw and was like, "You can sing? Can you write songs?" I was like, "Yeah!" I sent him 30 songs or something crazy. From then on he really pushed me to stop being so shy about it.

Fast-forward a couple of years and you’ve released your first song, "WYD Now?" You initially posted a TikTok of your friend telling you to send the song to the person you wrote it about. Did you end up doing that?

That's a secret. I'll reveal it maybe in the next song actually.

How did you get the idea to share “WYD Now?” on TikTok as an open verse challenge?

Someone commented it on one of my videos like, "You should do an open verse challenge." I kept it in the back of my mind for about a month. But I came home for Thanksgiving break two weeks before the song came out — I posted the Open Verse Challenge and then it went crazy.

It really took off. What part of the huge feedback still surprises you?

I would say the overall reaction to the song itself has been the most crazy and the most meaningful. Just because I also love the song and it means so much to me and I didn't think it would be that relatable and then it was. And that was so beautiful to see other people heal from listening to it. Also, it's just super validating after writing songs for so long to know that people like them and that it's something I can really pursue.

Have you thought about releasing some of the duets officially? Like the one with Yachty?

Yeah. I'm definitely thinking about it but nothing is set in stone.

The New York Times’ Jon Caramanica published a piece about your song and the TikTok duet in general, and seemed to view it as a new creative format for songs as a whole. What are your thoughts about the power of this new medium and format that TikTok has kind of opened up?

I think it's so cool. I'm so excited to be seeing so many other people doing it and it's just a fun way to connect with other artists or all forms of creatives. My open verse, like every type of art was created with it like poetry, comedian, rappers. It was so cool to see how far one thing could go and it's just such a cool way to create. I love it.

What are you working on now and what can we expect from you in the future?

I've been in Los Angeles working so much, making so many new songs that I'm so excited about. So definitely new music is coming soon and I'm so excited. I think people are going to like it.