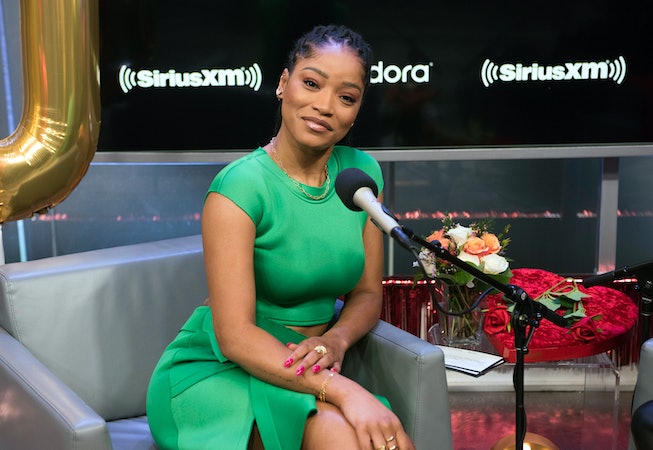 In July, Strahan, Sara & Keke, a talk show hosted by (you guessed it) Michael Strahan, Sara Haines, and Keke Palmer, was axed by ABC and replaced by GMA3: What You Need To Know. Though many viewers were saddened by the sudden cancellation, the news didn't surprise Palmer, who'd recently told Andy Cohen that she knew the pandemic would be the death knell of her show. But that hasn't stopped the Hustlers star from looking forward to the future.

On Tuesday, Palmer took to Twitter to ask a very important question: If I were to create a millennial "The View," who would you want to be my co-hosts?

Of course, for the time being, there is no official word that ABC is looking for a spinoff to their long-running morning talk show — currently hosted by Whoopi Goldberg, Joy Behar, Sunny Hostin, and Meghan McCain — but that hasn't prevented us at NYLON from coming up with our dream lineup nonetheless. Without further ado, here is who we would love to see on a millennial version of The View — you know, if it ever happens.

Back in 2016, New York-based drag queen Bob The Drag Queen breezed through season 8 of RuPaul's Drag Race, surprising no one when she eventually took home the crown. A quick-witted multi-hyphenate with an incredible sense of unapologetic humor, Bob was an instant star, shining in just about every category — whether it was improv, scripted acting, or rapping.

Currently, she serves as one of three hosts for the recently Emmy-nominated HBO drag makeover series We're Here, where she uses her trademark charisma to help small-town folks broaden their perspectives — a quality that would surely come in handy on an issues-centered talk show like The View.

But her chops are most prominently displayed in her duties as former host of the popular Drag Race recap talk-show "The Pit Stop," where her sense of on-the-fly banter is unparalleled.

An accomplished journalist and author who successfully parlayed her knowledge into a second career as a Hollywood director and Netflix super-producer, Janet Mock has already proven herself to be a multi-faceted talent. The brain behind Pose and Hollywood, Mock has demonstrated her aptitude as a storyteller, and indicated her passion for uplifting stories that are very commonly ignored.

While The View has always tried its best to keep pace with modern-day conversations, it has sometimes struggled to keep up with topics that really resonate with a younger, more politically-inclined audience. (See their insistence of including Meghan McCain simply for the case of "debate" and "differing opinions.") As an openly trans woman taking her rightfully-earned seat at The View roundtable, Mock would be able to bring a fresh, very underrepresented perspective to daytime television in a way no one has ever been able to before. Plus, imagine the looks she could bring!

If you really think about it, a podcast is basically a talk show, especially when that podcast has proved successful enough to translate over to an on-camera iteration.

Enter Crissle West, who has served as host for the critically-acclaimed podcast The Read since 2013, and its FUSE-aired TV spinoff The Read With Kid Fury and Crissle West since 2019. As both a podcast and on-camera host, West has done more than enough to prove that she's able to craft interesting, thought-provoking discussions about current news with a sharp-minded sense of humor. An irreverent comedian with a knack for hilarious tangents, Crissle would make a great partner for Palmer, given their similarly-minded, high-energy hosting styles.

Few people have inspired the kind of fervor that Bowen Yang did when he joined the Saturday Night Live cast in 2019. A Los Angeles transplant who was recently honored as one of 2020's Most Impactful Asians, Yang's ability to bring a distinctly queer sense of humor to the decidedly mainstream world of SNL has felt unprecedented over these last two seasons. (Who can forget about his hilarious Sara Lee Instagram skit, which Harry Styles participated in during his jaunt as host?)

But Yang is also a podcast host himself, one part of the duo behind pop culture comedy podcast Las Culturistas. It's there where Yang proves himself an apt host, able to approach any current news with his slightly off-kilter comedy style, and interview guests (whether they be big names like Will Ferrell or internet sensations like Hunter Harris) in a way that feels both relaxed and urgent.

Despite what The Television Academy says, Showtime's Desus & Mero was undoubtedly the best talk show of the past year and deserved a spot an Emmy nomination in Outstanding Variety Talk Series. A large part of that is owed to Ziwe Fumudoh, a New York-based comedian, actress, and writer for Desus & Mero. With a sense of humor that is as edgy as it is hilarious, Ziwe really came into her own during quarantine thanks to her own weekly talk show, Baited With Ziwe, where she invites (mostly white) guests to talk about their implicit racial biases.

Part Instagram Live interview series, part hard-hitting investigative journalism, and all self-referential comedy, Baited is a talk show unlike any other. As a member of The View roundtable, Ziwe would be able to use her trademark unapologetic wit to get to the nitty-gritty of any conversation, whether it be racial issues in America or, say, whether or not stealing from the rich and famous (as Alexis Neiers did to celebrities like Paris Hilton and Orlando Bloom) should be considered a form of wealth redistribution.