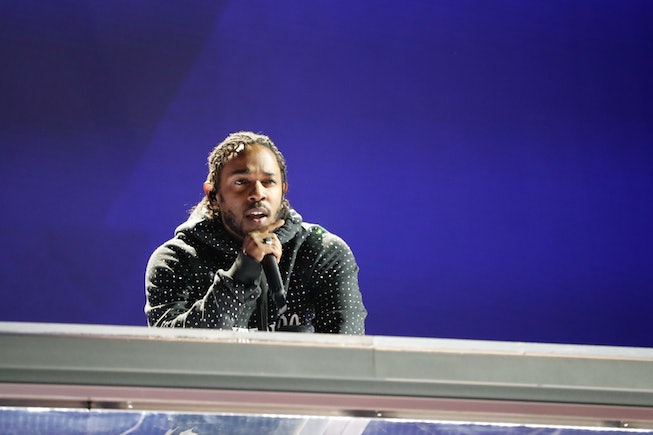 After five long years, a new Kendrick Lamar album is on the way. The rapper has announced his fifth studio album — and rumored last album with TDE — called Mr. Morale & The Big Steppers due out on May 13, he announced on Monday via his own press release posted to his website oklama.com.

The beloved rapper has maintained an extremely low profile since 2017’s DAMN., only recently resurfacing to release a few songs with labelmate and cousin Baby Keem and to perform during the 2022 Super Bowl halftime show. His album announcement was equally as discreet, made in response to a tweet that was jokingly calling him out as “officially retired” — it itself a parody of Brockhampton’s real retirement tweet from earlier in the day.

“Kendrick Lamar is officially retired,” Twitter user @raptalksk wrote. Quote-tweeting it, Lamar pasted the link to his website which led to the release stating the album’s release date and title.

Despite its wordy title, there’s still a lot to be deciphered around the project, including what — or who — exactly Mr. Morale and The Big Steppers actually are. But based off the tease of the press release there will be more information on the way. See everything we know about the project so far, below.

The album’s release date is soon

The album will be Lamar’s last on TDE Records

It’s believed that the upcoming album will be the rapper’s last with his current record label. In a previous dispatch posted to his website, Lamar himself wrote that he was working on “his final TDE album” in a note that also meditated on new beginnings, and closing chapters.

“I feel joy to have been a part of such a cultural imprint after 17 years,” he wrote. “The Struggles. The Success. And most importantly, the Brotherhood. May the Most High continue to use Top Dawg as a vessel for candid creators. As I continue to pursue my life’s calling. There’s beauty in completion. And always faith in the unknown.”

Lamar released his previous four albums, Section.80, Good Kid, M.A.A.D. City, To Pimp A Butterfly, and DAMN. with Top Dawg Entertainment. There’s no word where he’ll be heading to next, but it’s likely it will involve his own mysterious entities Oklama and media company pgLang.

The album cover includes Kendrick in a crown of thorns

Kendrick Lamar dons a crown of thorns with his family on the album cover for Mr. Morale & The Big Steppers, the rapper revealed on May 11. Lamar, though notoriously private about his inner life, featured his fiancee Whitney Alford, whom he’s known since high school, as well as their two children on the project’s cover. It was photographed by Renell Medrano. See it below.