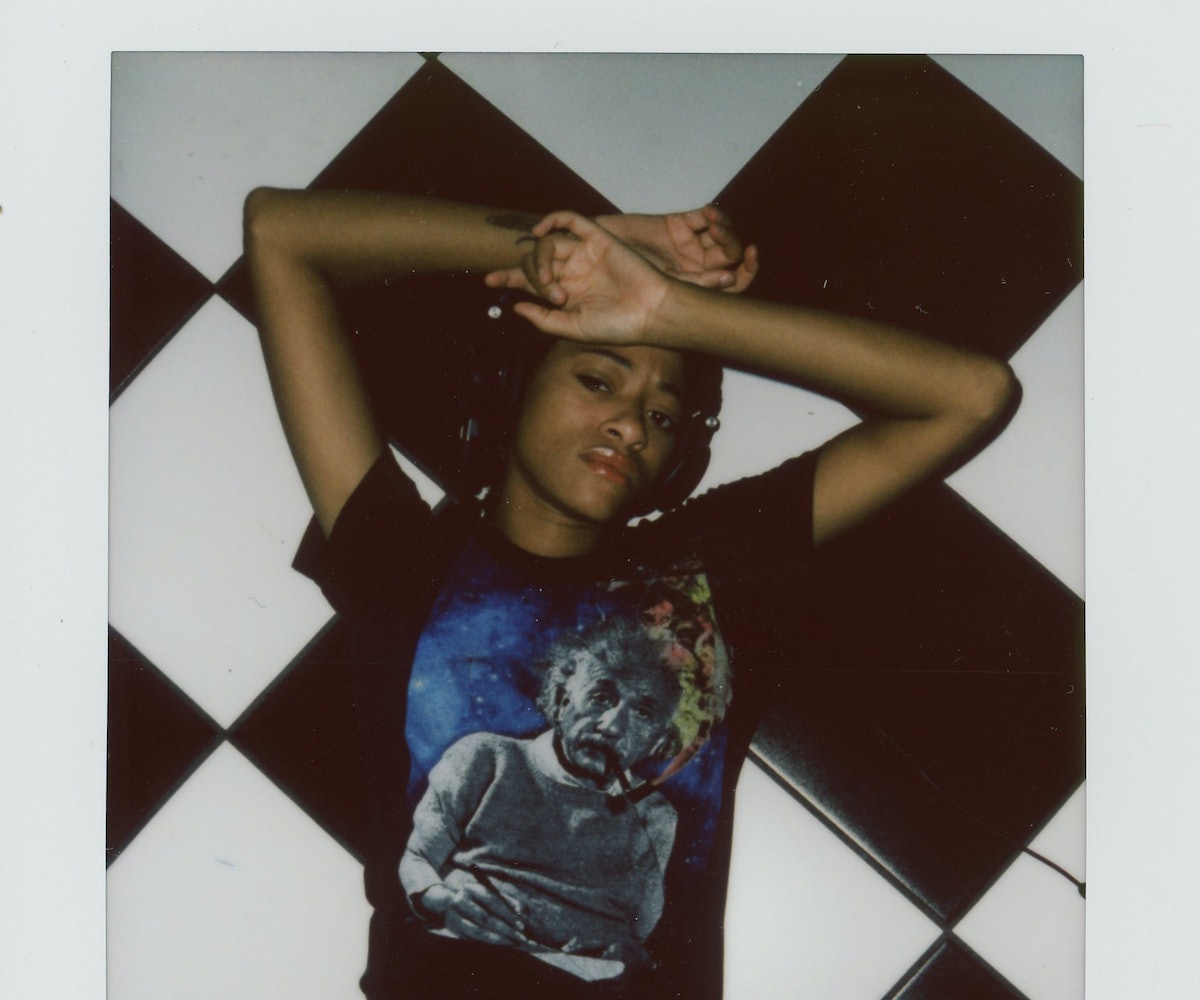 Increasingly, our reality feels like a game. Blush colored hearts that pop up at the top of our screens are normalized validation points; thumbs flicking away at glass challenge if there’s an end to the endless scroll; the chance of virality hides behind every post like some empty daily lottery. Updates, ads, and subscriptions are at war over our attention in this game that you’ve forgotten why you started playing. Or, maybe, you didn’t realize you were even taking part.

This is the concept behind Los Angeles-based artist Kilo Kish’s sophomore album American Gurl, out March 25. Skilled at packaging existential complexities into visceral conceptual art — her 2016 breakthrough album, Reflections in Real Time, felt at times like a cartoon diary that sprouted legs and couldn’t outrun the philosophical grief she detailed — Kish transports us into a neon-lit arcade where our senses are overwhelmed by blinking lights, bleeping sound effects, sticky surfaces, and sugary smells. “Ohhh, arcade! Let’s play,” an anonymous voice chimes on the album’s opener. The chaotic dinging of game consoles and metallic clash of pinballs reverberate in infinite directions vying for attention. “That one: American Gurl,” one friend commands. “I’m gonna win,” another says casually. They playfully banter before Kilo Kish blasts us into her glitchy popera.

“Being in an arcade in general is extremely overstimulating. It's constant noise coming from every place,” Kish says while sipping on tea. Not even five minutes into the conversation and she casually dives into the heavier themes of her new project. She offers a grocery list of questions that inspired her album. “What is the American game, and how do you play it? How do you win at this game, and is it possible,” she wonders. (Spoiler Alert: by American Gurl’s end there isn’t a winner or loser, and there’s no comforting resolution to these queries. The group of friends who began playing at the album’s beginning isn’t happy. They bang on the console, declare it’s broken, and demand their money back. Instead of answers, they walk away with questions of their own.) “At the end, it's like, what did I just see? It's exploring that dissonance of what is even happening around me, and how do I relate to it?”

The arcade game structure captures the thrilling choice of partaking in entertaining distraction and the benign disappointment that winning was never an option in modern life. Our daily feeds are shiny and enticing like PacMan chasing after colorful batches of fruit. But ultimately, both are an artful simulation of survival that can create a horrific rift in reality if we stare at the screen too long. “I really wanted it to have this feeling of scrolling through media, or the way that we consume information,” Robinson explains, noting the randomness of how information is thrown at us. “You could read something about climate change and then the next thing is an ad for laser hair removal.”

Born Lakisha Robinson, Kish has shared her multidisciplinary work as Kish Robinson and her music under the name Kilo Kish for over a decade. She’s used her experimental art to understand existence, through the forms of art-pop mixtapes and interactive museum exhibits. Her website describes her work as ways of “exploring identity and cultural expectations.” Part of what makes Robinson’s art resonate is her ability to explore her own identity while questioning the systems around her that inform its shape. But those questions don’t make her immune to outside influences.

“I still fall prey to the same wants and I still look at ads for skincare products and I’ll still buy that and get this,” she says. “That feeling of needing more power, needing more beauty, needing more respect, needing more love, needing more things is kind of [what] all the songs are about and my relationship to those ideas. It’s owning the fact that I’m not exempt. American Gurl is a mixture of all those things that have been put into us.”

The majority of American Gurl came together in 2019, the concept spawned from a conversation where she was discussing the perceptual limitations of Blackness. She doesn’t remember specifics, but recalls questions she asked herself: “Who would want to see me doing [conventional pop]? Why can’t I be an American girl?” Its release kept getting pushed off by the unraveling of the outside world — the pandemic’s onset, the murder of George Floyd. Similar to the way a social media feed can change in the blink of an eye, the context in which American Gurl was written has completely evaporated. Now, as we speak on her brief trip to New York, Russia wages war on Ukraine putting us on the edge of another world war. Kish can’t help but laugh: “This is the wildest time to try and dissect this part of our culture.”

She says that she intended to go the route of Lenny Kravitz or Gnarls Barkley for this album’s sound but states that the final result was a “Kilo Kish record, but a strange one.” Produced by Ray Brady, American Gurl’s fourteen tracks are a mash of new wave industrial pop, disco, dance punk, and trip hop while Kish dances with national and personal ego. The resulting whiplash concoction of pop is the background for her trying on different roles in order to understand herself further in relation to our warped, overstimulated reality. “What will it take to satisfy?” she asks on the robotic ballad “Distractions III: Spoiled Rotten.” The track pokes at her frustrations with consumerism by stepping into an exaggerated character whose insatiable hunger for things is never satisfied.

“It’s a part of my personality to constantly be wondering what’s deeper.”

“I’d like to think, ‘Oh I’m a purist. I do things purely for the sake of art and making and giving,’” she says in a mocking tone. “But that way has been tainted through the worlds that I’ve gone through and through the seasons that I’ve lived through and through these years in this industry. Even if I was pure or if anybody was, it’s really hard to stay that way given what you need to do to survive and what is the name of the game. You go to a magazine shoot or you go to a fashion shoot and they’re like, ‘We want authentically you but actually can it be like this and can you put this on and can you say that exact thing you just said but like this?’”

It’s easy to get sucked up into American Gurl’s momentum without immediately recognizing its dark underbelly. Like a lollipop with a vitriolic center, the poppiest moments contain insidious sentiments. That fine balance not only mirrors this world’s current contradictions, but is evidence Kish is honing her craft. “The older I get and the better I get at what I do, it's like I'm able to juxtapose it better versus hitting you over the head [with] brain dumps,” she says, noting that American Gurl is more nuanced than Reflections. “If you don't want to go there with me you don't have to.”

Kish is not an artist who wants to supply an answer, and she’s aware that the questions she’s asking don’t have a definitive response. So why bother to even ask these questions? Why make art that probes knowing there won’t be an explanation? “I’m restless, obviously,” she laughs. “I have a lot of energy. If it doesn’t go somewhere then it’s in me being anxiety. It’s a healthy way of getting out my fears and worries and confusion about the general nature of living.” As she continues, it seems that asking questions is her source of personal freedom. “It’s a part of my personality to constantly be wondering what’s deeper,” she concludes. Without that curiosity, she wouldn’t know who she would be.

Kilo Kish’s American Gurl is out 3/25

NEXT UP
Entertainment
Taylor Swift Swept The 2022 American Music Awards
Entertainment
Caroline Polachek Announces Album ‘Desire, I Want To Turn Into You’
Entertainment
RM's "Yun" & 9 Other New Songs Out This Week
Entertainment
Precious Pepala Is Going From TikTok Covers To Her Own Resonant Songs