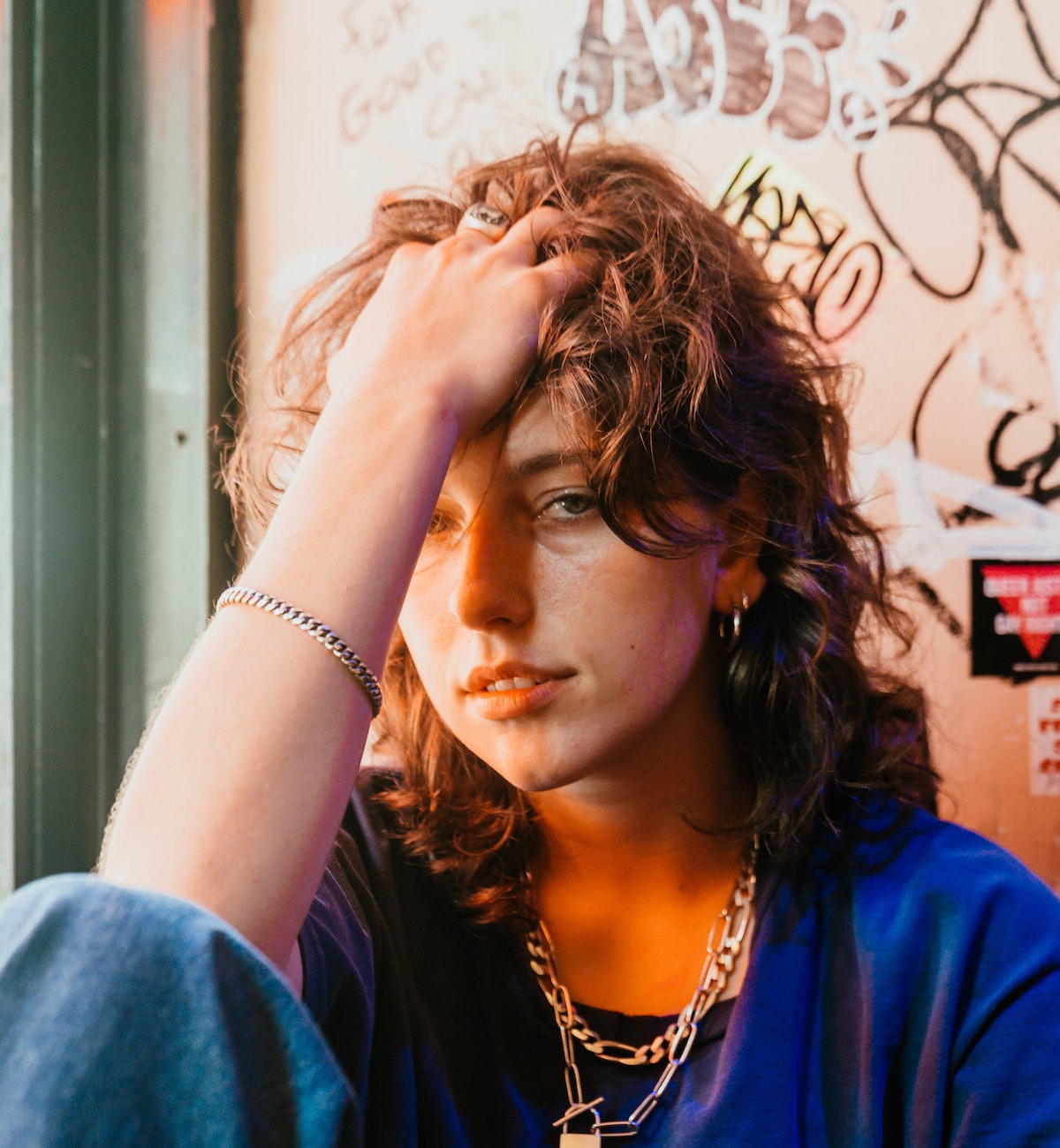 It’s hot as all hell outside, and King Princess and I are at 169 Bar talking about the novelist Patricia Highsmith. When I arrived, Mikaela Straus, 23, better known by her fitting stage name, was reclining on one of the Lower East Side establishment’s wooden benches, drinking a Budweiser. “Cool off, relax,” Straus told me, “get a beer,” and held up the can, garishly covered in an American flag print and the word “freedom.” This is deeply offensive to Straus — but we drink the Buds anyway. “Are you feeling refreshed by freedom?” Straus asks.

We’re talking about Patricia Highsmith because Straus was inspired to pen her 2018 breakout hit, “1950,” by Highsmith’s 1953 lesbian romance, The Price of Salt — familiar to most through Todd Haynes’ 2015 film interpretation, Carol. We’re talking Highsmith because Straus’ tweet, “hey scotus, this is not at all what I meant when I said ‘I love it when we play 1950,’” was making the rounds in the aftermath of the overturning of Roe v. Wade. But we’re also talking Highsmith because we’re gay and we’re in downtown Manhattan at a bar that’s been around since 1916. Really old bars have a certain palpable orphic aura about them, and especially bars in New York. It’s a city with, as Straus says, “a beautiful history — a queer tapestry.”

“The original Facebook was just lesbians writing their names down on a tablecloth,” Straus tells me of the lesbian speakeasies Highsmith frequented, part of that tapestry. The Price of Salt was “huge” for Straus when she was in high school and “feeling unrequited love.” Highsmith’s text is rare queer representation from the ’50s, Straus explains: “We struggle now. And this bitch managed. She wrote The Price of Salt with a happy ending, under a pseudonym, Claire Morgan. It was the first book of that type to be published as a hard copy. I thought about that a lot when I was writing ‘1950’: coded queer love, the way you’d have to subvert your signs to someone you were romantic with.”

“This is the history of the New York writers scene,” Straus adds. “I love history.”

It seems apt to be sitting in this very old bar in New York, the city Straus grew up in and is on the precipice of moving back to, because, let’s face it, it’s just better here. Straus has been in the city since Sunday night, mostly doing press for her new album, Hold On Baby, and hanging out with friends from high school. It’s not hard to imagine Straus, who grew up in Williamsburg near her dad’s recording studio and went to school in Manhattan, stomping around the city with friends and their fake IDs. “I always went to Metropolitan,” she says, referencing the queer bar by the Lorimer L subway stop. “The iconic door lady, who still works there to this day, was absolutely not having my fake ID. But I was all around. We would roll up to places with the worst fake IDs you’ve ever seen.”

Though she moved to Los Angeles when she was 17, Straus has that unmistakable, rascally NYC kid demeanor — at ease but on guard; comfortable but questioning. She raises her eyebrow at me when I tell her which songs from Hold On Baby are my favorites and says, “You’re telling me you hate my album?” Which, obviously, I don’t. But she’s earnest, too, vacillating between cheeky and heartfelt, like when tweeting about being on the iconic Calvin Klein billboard over the Broadway-Lafayette station (“I feel so incredibly proud to flaunt my gay ass mug up there”); or when telling me about her pets: Raz the border collie, Ziggy the cat, and fish Jazmine Sullivan and Gwen Stefani (“Sadly, Adele, Stefani Germanotta, and Onika Maraj have passed”), who all get along swimmingly. Straus, her best friend Jack, Straus’s girlfriend, creative director Quinn Wilson, and her brother, Joe, all live together with the animals in a house in LA — which also boasts an in-home studio Straus built.

When I ask about meeting Wilson, Straus first says, bluntly, “I DMed her,” and then softens up and gets starry-eyed. “She was so pretty. My friend said her name and I said, ‘Who’s that?’” So she slipped into Quinn’s DMs: “I love your work.” They had dinner, which Wilson initially thought to be a business meeting — being Lizzo’s creative director and all. “I guess I was charming enough that she saw me again,” Straus says. And now it’s been three-and-a-half years.

As for the gorgeous song with Wilson’s name in it from Straus’ new album — the incredibly sexy, impassioned one with the whistles and saxophone and the repeated, “Oh Quinn, oh Quinn” — “Winter Is Hopeful”? At first, Wilson was upset. “But then she heard it and was like, ‘That’s a good song. This is really good, Mikaela.’”

On the album, it comes right before “Little Bother,” which has an almost pop-punk R&B sound, like it was made for driving around mad at the world. “Winter Is Hopeful” is sultrier than anything else on Hold On Baby. As Straus puts it, “The saxophone moment is wild style.” Straus wrote and produced the song in a one-day feat with Ethan Gruska, a songwriter and producer known for his work with Phoebe Bridgers. “I’m typically very anti-saxophone,” Straus says, but the musician she tapped “plays saxophone like somebody who doesn’t play the saxophone. He makes it sound like everything and nothing.” Straus programmed the drums, Gruska helped with synths, and mixer Sean Everett “took it to an entire other level.” For Straus, who was raised on studio production, mixing with Everett was a highlight. And it happened while Straus’ dad, who built his own studio, Mission Sound, was in the room: “My sweet, sweet dad was in the studio, walking around. He suggested a couple of things that were f*cking aha moments. Sean and I looked at each other and I was like, ‘That’s how my dad’s a master engineer.’”

Hold On Baby was recorded over lockdown in LA with The National’s Aaron Dessner in upstate New York at 070 Shake producer Dave Hamelin’s spot, and at Mission Sound, which is, naturally, Straus’ favorite hometown studio. It’s an album Straus describes as “more introspective” than previous records, an album about “handling the shit that’s hard to handle.” Not liking yourself is “a different type of heartbreak,” Straus says. “I didn’t have another person to focus on as the centerpiece or the antagonist of the record other than myself, which brought me to a new sphere of songwriting, and it made me feel a lot more confident in my ability to analyze myself.” It’s a consideration of our relationships with ourselves, the situations that make us feel miniscule and worthless, or out of control and too much, or both at the same time. “Little Bother” deals with feeling like a crumb on someone’s sleeve; “For My Friends” emphasizes “loving me takes patience”; “Crowbar” pries away at a chip on a shoulder; on “Too Bad,” Straus is a “shell of a man,” a “loose cannon” when feeling abandoned; the very Lilith Fair-meets-Thelma & Louise closer, “Let Us Die,” asks, “Pain makes me want you/ Does that make me awful?” It’s groovy self-reflection — but make it knotted, sharp, kinky.

“This is the history of the New York writers scene. I love history.”

In the words of King Princess, Hold On Baby “is giving big Villanelle energy.” Straus just finished Killing Eve (“I was crying on the ground”), and happens to have a considerable knife collection. How many, you ask? “I don’t know, like, a hundred? There are so many at my dad’s house. I think they’re beautiful works of art; they’re utility and ceremonial,” she says. Some of them are sentimental, like the first Swiss Army knife her dad got her as a kid. “We would wire little lights together. I was always very into disassembling things and reassembling them. Now, I’m absolutely useless in a household setting. My girlfriend’s got a tool belt and two drills. She's like, ‘Let’s build some shit,’ and I’m like, ‘No.’ But when I was a kid, I was super, super into it.” Straus pauses, and sneaks in, “I just like weaponry and guitars — just a normal, normal person.”

I ask Straus if she has any other favorite pieces of gay media and she says, “To me, when you say gay media, I’m like, The Real Housewives. Because gay people like that. I love that. Brandi Glanville is bisexual.” But also, I learn, Heather Graham as Felicity Shagwell in Austin Powers: The Spy Who Shagged Me was Straus’ first crush. “I just remember my p*ssy being like—” Straus says, gesturing and making an awooga face. And there was Amanda Bynes as Penny Pingleton in Hairspray: “When her mom has her tied up to the bed. So hot.” To top it off, Chloë Sevigny in Big Love: “In the Mormon garb. Specifically her in the braid — gorg.”

At this point, I remember an important message from my roommate. “My roommate says ‘thank you,’” I begin. Straus interjects: “I made her gay.” Well, no — “She was already gay. Sometimes people say that to me and I’m like, ‘Honey you were already gay. I didn’t do anything.’” The message from my roommate is: “Thank you for the time I was on acid and someone played ‘Talia.’” And Straus says, “Tell her ‘you’re welcome.’ If I heard ‘Talia’ on acid, I would have a panic attack.”

Straus then asks me to get her another beer, and I do, another “freedom” can, and we sit around talking about The Matrix (“not magical enough” for Straus), and Lord of the Rings (also “not magical enough” — but she might give it a try after learning from a friend about its WWII-era queer-coding), and how it suddenly smells like mac and cheese in here, and it’s time for Straus to get a snack. Before we leave 169, back to sweating, the last words King Princess says to me: “Very cunt.”

King Princess’ Hold On Baby is out now.