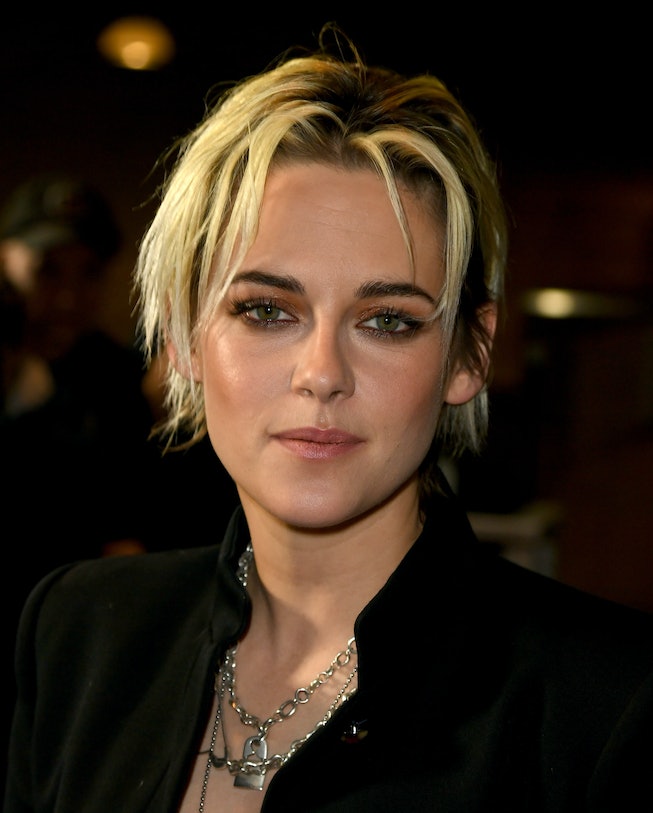 I've been looking forward to Happiest Season since last year. But for the most part, mum has been the word on what to expect from the upcoming film, other than the fact that it will hopefully change the game as a big studio holiday rom-com that centers on the relationship between a lesbian couple. Now, less than three months before the film is set to hit theaters (whatever that even means in our pandemic times), we are finally treated to a first look at what to expect from the film, courtesy of People.

Directed by Veep scene-stealer Clea Duvall based on a script penned by her and Mary Holland, the film follows Twilight's Kristen Stewart and Halt and Catch Fire's Mackenzie Davis as a lesbian couple that returns home for Christmas. Stewart plays Abby, who plans to propose to Davis' Harper over the holidays, only to find out that Harper has yet to come out to her very conservative parents. The cast is rounded out by Justified's Mary Steenburgen, Titanic's Victor Garber, GLOW's Alison Brie, Parks and Recreation's Aubrey Plaza, Schitt's Creek's Dan Levy, as well as the film's co-writers themselves, Clea Duvall and Mary Holland.

"I'm a huge fan of Christmas movies, but I had never seen my story represented. Happiest Season felt like a great opportunity to tell a universal story from a new perspective," Duvall told People about her inspiration for the film. Stewart echoed these thoughts, saying, "I love when a holiday movie makes you long for an idea of home, but also examines how hilarious and hard reality at home can be sometimes." Later, the actress added, "I think I've wished to see a gay Christmas rom-com my whole life. I'm so happy and proud of Clea for bringing this into the world."

And from the looks of it, the process of bringing Happiest Season into the world was an enjoyable one. Speaking about her experience directing her second feature film, Duvall said, "Maybe I'm biased, but this was one of the most fun sets I have ever been on. From the cast to the crew, everyone showed up each day with an excitement and energy that made every day a joy." Once again, Stewart stood in agreement with her director and co-star, adding, "We couldn’t have had a better more loving pack of weirdos supporting each other on this one. Had an absolute blast.”

Well, I can't wait to have a blast of my own when it finally comes out!