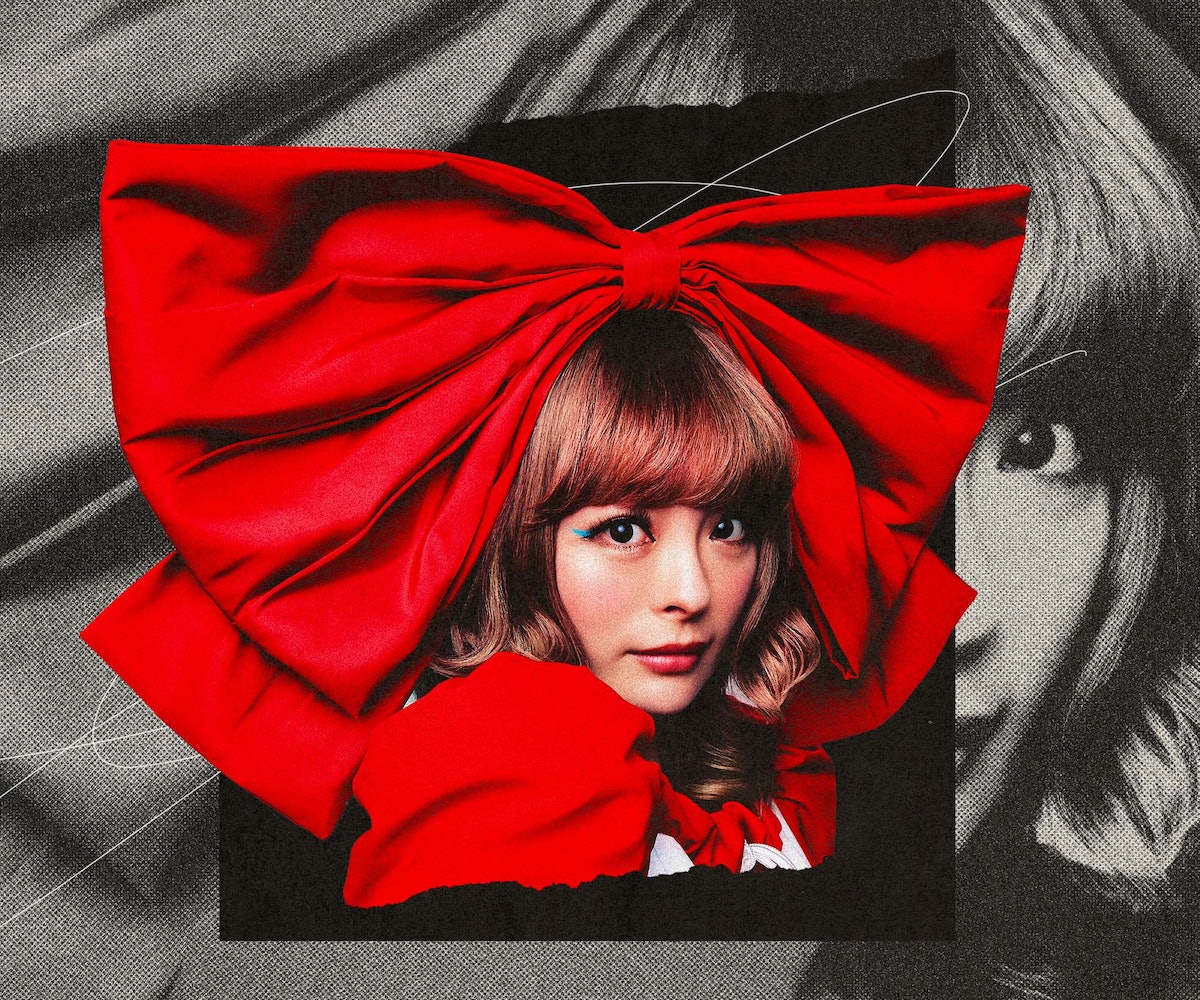 “One thing that fans always tell me is: ‘Oh, you really exist!’” says Kyary Pamyu Pamyu halfway through a Zoom call. “You know like an anime character; it's easy to see this Kawaii character in a music video and then you see her in real life, and you're like, ‘Oh my God, you're real!’”

It’s easy to see why one might think so. In a little over a decade, the Japanese star Kyary Pamyu Pamyu — or “Kyary-chan,” as she insists on being called — has blazed past the silos of the pop star and come to embody an eccentric, multifarious, and larger-than-life idea. She’s often called “J-pop Princess” or “Harajuku Pop Princess,” adding an invisible weight to who she is even before the first melodies of her songs kick in. But more important than the epithets that decorate her name is what she’s come to signify.

Kyary Pamyu Pamyu is a whole universe: a vibrant, ultra-neon, alternate reality where she fights onion-shaped villains with googly eyes in an inverted flower-shaped dress and rules over her psychedelic-hued queendom from a golden throne decorated with purple and yellow octopus-tentacles. She ties it all up in a neat oversized bow of frenetic hyper-pop racing through on a chariot of high-pitched loops, synths and beats, courtesy of longtime producer and friend Yasutaka Nakata. Everything is extra, everything is eccentric — a little kooky, a little offbeat, a little terrifying, and hopelessly addictive, the sounds and images sticking to you like the sugar that stays on your fingers long after you’ve torn through the candy in one go.

While Kyary Pamyu Pamyu relishes the idea of being an idea — “I love to be a mysterious figure,” she says — Kyary-chan herself is not a concept. Speaking to NYLON from a nondescript room in Tokyo about her latest album Candy Racer, she’s very much real, very human, and only slightly dazed at how the dichotomy of her stage persona and her real self has played out.

“I don’t really have that much of a negative [perception] of being viewed as a Kawaii culture icon,” she says, clad in a purple hoodie and her signature bangs swept aside. “That shows what Kyary Pamyu Pamyu is for a lot of people: it's this character that lives in the virtual world. It might not be exactly who I am as a person, but it is an important part.”

Ten years ago, when she debuted in 2011 with her single “PONPONPON,” she didn’t expect to one day have a title precede her name. “When I first started, it was a project that sounded fun. I didn't have any expectations. I wasn't thinking long-term. [I was like] ‘I want to be here. I want to do this’,” she recalls.

A decade down the line, after releasing her fifth album Candy Racer in October and establishing her own label, KRK Lab, not much has changed on that end. She still goes with the flow: “My mentality is not about making plans. It's just seeing a mission and clearing that mission. Like seeing a challenge and going: ‘Okay, this is what I have to do. How am I going to get it over with?’ Taking the situation and figuring out how to clear that mission, and how to get to the next mission.”

On Candy Racer, her mission uses the sounds from the ‘80s and ‘90s as a launchpad to further perfect the Kyary Pamyu Pamyu sound. From the campy extravaganza of the titular track “Candy Racer” — on which she’s ghost haunting a trio of naive youngsters exploring a haunted house — to the broken, choppy intonations of “Tsukuchi Tsukuchi Tsukuchi Tsukuchi Tsukuchi” on the near-delirious song “Dodonpa,” to the wondrously playful yet culturally rooted “Kamaitachi” where she draws on traditional Japanese motifs, Candy Racer finds the star reaching brand new heights.

While Kyary’s artistry has always emanated an endearing confidence — one does not simply feature neon-tinted and polka-dotted walking hands in a music video without being absolutely self-possessed — her latest album is a proverbial climax for the star, the moment in the movie in which the lead actress has finally come into her own. She’s done this for years now, but on Candy Racer she finds an ease and freedom, perhaps stemming from the knowledge that, at this point, she doesn’t have to prove anything to anyone. She’s free and completely herself — not that she ever skimped on that.

From the beginning, Kyary’s free spirit has been nurtured by Nakata’s lyrical and technical prowess. Having produced all of her albums, Nakata is as much a part of the Kyary Pamyu Pamyu ethos as she is, becoming a soundboard for her vision and bringing it to life one track at a time.

“Of course, he writes the music and the lyrics, but he's also very active in listening to how I feel about the world,” she says. “What I’m into, what songs or music I’m into — he takes my emotions, these raw feelings and makes them into these cool lyrics. He understands what I want to say, and I understand what he wants to get out [of it].”

“Whenever I have a show, the audience is kind of waiting: ‘What's she going to do this time? What's the theme? What’s the trick?’ There is pressure to live up to that.”

She recalls something he said to her after they recorded the bouncy track “Perfect Oneisan.” “‘The perfect role model. The perfect woman,’” she muses. “That’s the hardest thing to do.’”

“Those people are the ones who have the hardest jobs,” she continues, going back to Nakata’s words about “Perfect Oneisan.” “It’s a juxtaposition where they are in a position where you have a generation that looks up to them. They kind of want to be themselves [but at the same time] they have to be a good role model, even inspiration. That in itself is so difficult.”

Does she ever find herself relating to the “Perfect Oneisan?” Maybe not perfect, but surely a playful one?

“I like to play with audience expectations,” she says. “There is pressure: whenever I have a show, the audience is kind of waiting: ‘What's she going to do this time? What's the theme? What’s the trick?’ There is pressure to live up to that.”

“I love to play with those expectations and subvert them. I kind of say: ‘Okay, you want this, but I'm going to do this. It's a good creative connection with the audience,” she adds.

Kyary-chan calls this subversion “adding poison to everything,” a nod to her Harajuku roots. In her polka-dotted, pastel-colored world, there’s also an element of horror that offers strange comfort in knowing that driving a knife through a piñata might actually result in brain matter spilling out, as opposed to the candy-colored confetti you might expect. The longer you look at something, the more you feel a chill creeping up your spine. It’s the kind of haze that leaves you wondering whether the pattern on the wallpaper is actually blood splatters.

“[The] Kawaii image includes these grotesque [things]. It’s all part of the Kawaii culture,” she explains. “‘Adding poison’, that’s my way of adding a part of myself. I sound cute, kind of pop-y, it's safe for everybody. But having that one little dash of something dangerous [and] mysterious that throws it off is what created my image. Poison is a part of me.”

When it comes to her songs’ sometimes nonsensical lyrics, Kyary takes a sledgehammer to our compulsive need to attach meaning to everything, especially art. Unlike English teachers who equate the act of eating spaghetti in a novel to the protagonist sorting through the emotional turmoil in their life, Kyary believes in face value. Not everything has to make sense, and not everything should. Meaning lies in the ears of the listener.

“Lyrics are really important for a lot of Japanese people, but when it comes to what I enjoy, it’s just how [something] sounds,” she explains.

It’s as if she moves through life with an emotional litmus test, measuring things by whether they feel right and not by what is the next logical step. If that means using made up words in her songs or repeating a phrase over and over again in a hyper-pop spiral and calling it a song, then so be it.

“Even though I don’t have a specific message that I want to put in the music in itself and a lot of it is made up words, whenever it sounds good, [to] a lot of fans, these lyrics mean something deep.” she says. “Because it is a little more, I guess, avant-garde, a little open-ended, it allows for more interpretation. Even though it sounds like it doesn't make much sense, it's just words put together, you look at the lyrics and kind of see what I’m saying.”

Perhaps that’s what has made Kyary Pamyu Pamyu as iconic as she is: a Kyary Pamyu Pamyu narrative is what you want it to be. She is her, she is all this, she is extra and extraordinary, but she is also you and your intricate interpretations of her music. Whoever you are, in Kyary’s magnanimous, hyper-neon world, you’re understood.

Kyary Pamyu Pamyu’s Candy Racer is out now. To mark her 10th anniversary, she’s embarking on a nationwide Japan tour kicking off January 16, 2022.