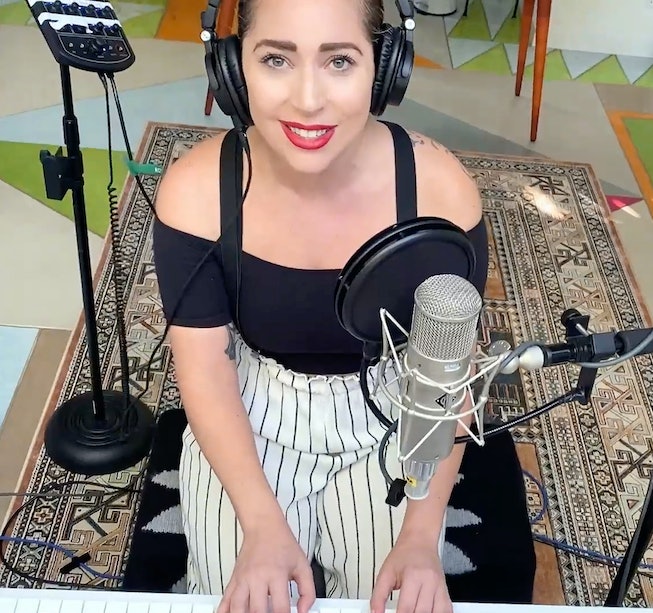 While some fans have been growing increasingly frustrated with Lady Gaga for her lack of promo surrounding her recently-released sixth studio album Chromatica, the singer has apparently been hard at work on a project none of them could have possibly anticipated. Starting this Friday, the singer will play host to a new radio show that will stream exclusively on Apple Music. (Sorry, Spotify users!)

Simply titled Gaga Radio, the singer's new Apple Music radio show will air weekly. According to a press release, the inspiration for the radio show was the same as the inspiration for Chromatica as a whole — the dance floor. In an ode to the nightlife culture that helped the singer record one of the best albums of her career, Gaga will use her radio show to talk to "the DJs, divas, and producers who inspired her and who helped bring Chromatica to life." In addition to the conversations, each episode will also feature "an exclusive DJ mix" from one of the week's guests. "It's a celebration of dance music when we need it most."

"The last few weeks I've been figuring out different ways at home that I can be of service to what I would call the singular global community, one that I believe to be kind in nature, one that I believe to be very special to my heart and I believe to the hearts of many," the artist born Stefani Germanotta said in an official statement. "And so I've been thinking of all the ways that I can be someone that contributes to the society and the world. I'm super thrilled, excited to have this show and this opportunity to play an incredible mix of music every week."

Gaga will celebrate the impending launch of her new radio show with an "intimate chat" with her close friend and Chromatica executive producer BloodPop. The two brains behind Chromatica will talk extensively "about the making of the album and the challenges that came along with it, including depression and self-doubt."

Episode one of Gaga Radio premieres this Friday on Apple Music at 2:00pm ET/11:00am PT. Tune in here.

Check out Gaga's announcement below.

NEXT UP
Entertainment
FLO Is Headlining Their First US Tour This Spring
Entertainment
19 Niche Music Festivals For Every Type Of Person
Entertainment
Meet Amy Allen, The Grammy-Nominated Songwriter Behind Pop's Most Honest Hits
Entertainment
Beyoncé Announces 41-Date 'Renaissance' Tour
Style + Culture, delivered straight to your inbox.