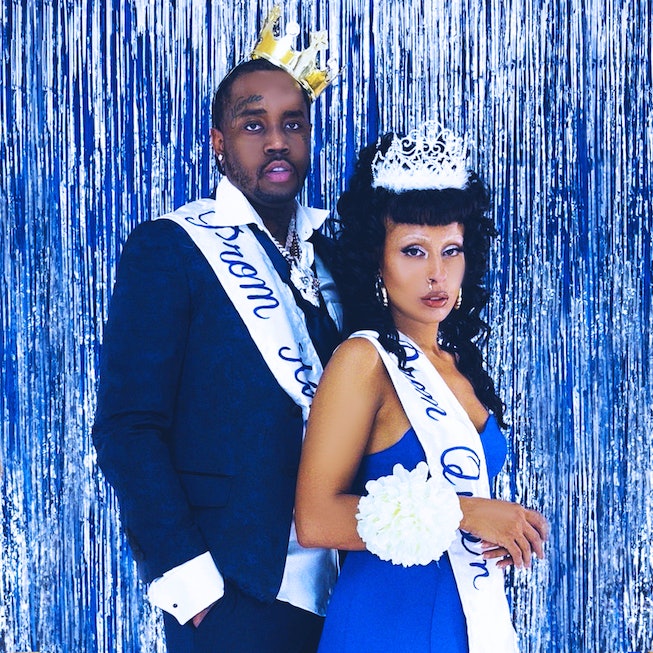 Staten Island-born LAYA is multi-hyphenate personified. In addition to being a singer, LAYA is also her own songwriter, producer, creative director, and visual artist. In her latest work — her first single of 2022, “Brag,” featuring NYC drill star Fivio Foreign — LAYA showcases her kaleidoscope of talent with slinky, layered vocals over a throwback R&B beat. The lyrics aptly describe her come up, as she gently lets fans and foes alike know that she’s not afraid to brag if she has to.

LAYA also shot, directed, and edited the visuals, on top of doing her own hair, makeup, and wardrobe. The visuals themselves are unique, too, with a retrofuturist take on a moving image yearbook photo. Take a look at the video, premiering exclusively on NYLON, below.

In the video, LAYA explains that she and Fivio take on the roles of Prom Queen and King at the height of their “It” kid status, echoing the lyrics of “Brag,” which are all about not being shy and going after what you want.

NYLON caught up with LAYA to learn more about “Brag” and what’s next for her:

What inspired “Brag?” Tell us about your frame of mind when you wrote it.

I was at a place where my music started to take off and doors began to open for me. I was receiving a lot of love and recognition for the work I had been doing. At the same time, I started to receive shade and animosity from some of my peers. People that I thought would have been supportive in those moments in the same way that I had been supportive of them in their moments of success totally switched up.

The song comes from a place of knowing what you deserve because you’ve worked hard for it and being unapologetically proud. I’m not a boastful person in my own life but on the record I felt the need to “Brag” a little.

How did the "Brag" visuals come about?

I originally wanted to create a simple lyric video that wouldn’t take me too much time to create, because the laptop I was working with at the time is about 10 years old and my previous videos took months to create. I had the idea of making living photographs because I knew it was something that I could easily pull off in a short amount of time. I thought high school photos fit the energy of the song. The senior “It” girl who’s so good at everything that you love to hate her. When it was done, I liked how it looked as it was so much that I didn’t want to put any lyrics over it. I originally created it before Fivio got on the record. Members of my team had an opportunity to play it for him, and he loved it so much that he wanted to hop in it. He fit perfectly into the visualizer because he has a natural bad boy energy. It was spot on for the bragadocious “It” team I was going for, as I was able to add him as Prom King aside me where originally it was myself alone as Prom Queen.

It was breeze working with Fivio. He’s incredibly efficient and professional when he’s working, not to mention a charm. I admire his work ethic. He’s a lot more diverse than people think. I’m very grateful that he decided to get on this song. It was real and genuine and that’s what he is. When it came time to shoot his parts in the visualizer, he was very kind and understanding about the unorthodox way I capture my visuals. It could’ve been very awkward. Here’s this celebrity in my tiny apartment, and I’ve got him performing in front of my iPhone. I felt like, “Aww man, he probably thinks I’m so lame.” But he was totally cool about it. It came out great and I can’t wait to shoot an official video for it. I know he’ll kill it.

You write your own songs, direct your own videos, and do your own styling — what's your creative process like, and how did you become such an independent, self-starting artist?

Well the truth is, I’m the daughter of two artists. My mother is a visual artist who paints, sculpts, and so much more, and my father is involved in musical theatre and acting. Neither of them are famous or rich for their work, but they do it because it’s what they love. When there’s something I want to create I just do it. There’s never been a moment where I’ve had to guess how I was going to do something. From writing the song and mixing the record to sound how I want it to sound, to visualizing a video concept, to doodling what I want my outfits to look like, to grabbing fabric, hot glue and a can of paint to make said outfit, to setting up my lights, green screen, and tripod to film it, to spending days and weeks editing that footage, to then finally put it out for the world to see. I come from a long line of DIYers and I’d like to say ain’t nothing to it but to do it!

What can fans look forward to seeing from you in 2022?

My fans can look forward to more music both old and new. I’ll be relaunching my EP “Um, Hello” this year as well as some new music. I can also say there will be more collaborations in 2022. I haven’t done many in the past so this will be a new and exciting adventure for both my fans and myself.

You recently signed to Warner Records. Why did you decide to sign with a major label and why Warner?

Why sign with a major? ‘Cause I’m major! I have every intention to compete on every level. I want to add color to the industry and bring fun and creativity back. I want to impact music and culture in a major way, so it makes sense to have a major label to help me do it. I chose Warner because they saw me and my vision and believed in it whole heartedly without hesitation. They can see where I intend to go and to what levels I want to take my art and are totally on board. They’ve been a blessing and an amazing addition to the LAYAverse and I’m very proud to be their new artist!