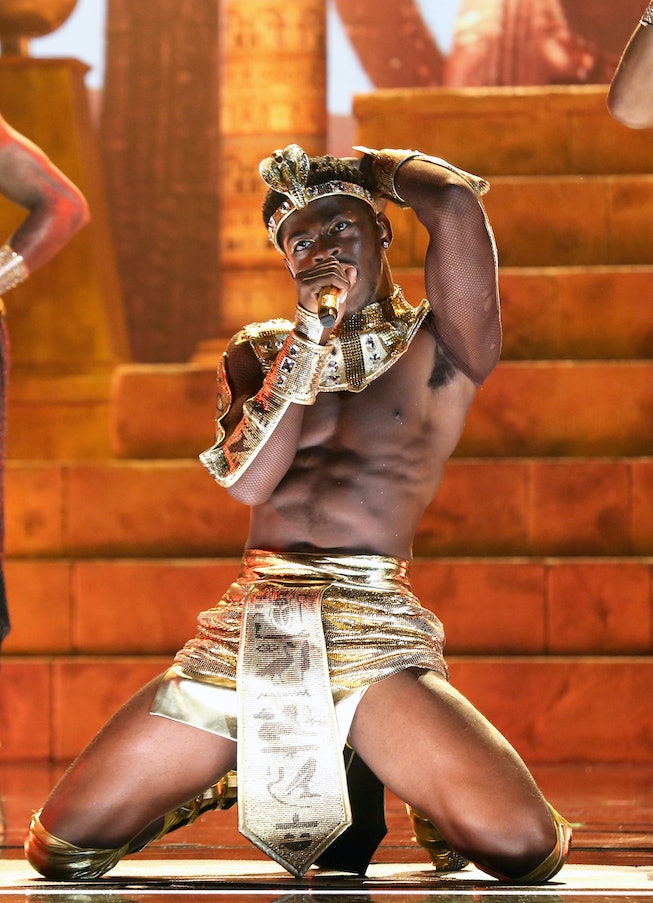 Last night Lil Nas X delivered a live performance of his hit song, “Montero (Call Me By Your Name)” at the 20th BET Awards. This was his first time back on stage following his SNL performance (and warddrobe malfunction), and he did not disappoint. Instead of cowboy chaps, Lil Nas wore no pants at all, instead donning a gold pharaoh costume that matched an Egyptian-themed set. The three minute long performance included his signature dance moves, a tribute to Michael Jackson’s “Remember The Time,” and a steamy on-stage kiss with a male dancer.

Though the kiss received many cheers — and even a standing ovation — from the crowd, some viewers criticized the rapper on Twitter. One user wrote, “Don’t use African culture for shit like this!!!! '' Respect our ancestors.” But Nas X crafted a swift response and said, “ya’ll really like to pretend homosexuality didn’t exist in African culture.”

The homophobic judgment didn’t stop there — another user commented on Nas X’s red carpet outfit and claimed it was too feminine. They tweeted, “I’m sure he was paid a million dollars to wear this nonsense. This will cause other little boys to admire him to dress this way for free and I hate seeing men emasculated.” Once again the rapper stood up for himself and tweeted back at the user, saying, “we causing the emasculation of men all 2021.”

Despite the backlash, fans and celebrities have shown their support for Nas X online. The rapper has continued to share video clips and photos of his performance, gaining hundreds of thousands of likes and retweets. Meanwhile fellow rapper Kevin Abstract tweeted, “Lil Nas A Fucking King Lets Go.” Diddy chimed in as well, tweeting, “Lil Nas X did that!! Be fearless!!!”