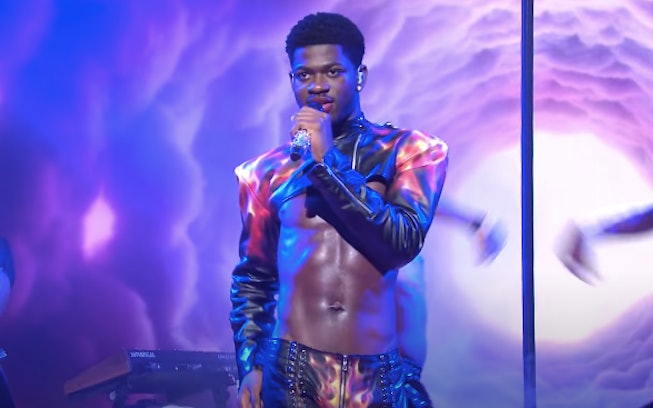 We can always count on Lil Nas X to keep things interesting! On Saturday, May 23rd, the multi platinum artist delivered a live rendition of his latest single, “Montero (Call Me By Your Name)” on Saturday Night Live. The spicy performance mimicked its controversial music video with a hell-themed backdrop, sultry pole routine, ass-less chaps, and even a neck lick. But nothing was more shocking than when the rapper accidentally ripped his pants on stage.

The wardrobe malfunction occurred towards the end of his set. After sampling a verse from BIA’s hit “Whole Lotta Money,” Lil Nas made his way to the pole, executed a (perfect) body roll, then dropped it a bit too low, causing his pants to split down the middle. Luckily he reacted quickly, and finished the song with his hand covering the hole.

After the show aired he went on Twitter to explain the incident, saying, “At first I was afraid to even perform. Then we rehearsed for two weeks, then all the dancers got removed because one had COVID and new ones had to learn the routine in 24 hours, and then I ended up ripping my pants and couldn’t finish. Everything happens for a reason though lol.”

Being the good sport that he is, Nas X also posted TikToks of himself laughing at his performance and comparing it to the SpongeBob Ripped My Pants” meme.

While this performance may not have gone as planned, the rapper tweeted that he wants to try it again at the BET awards. Who knows if that will happen but, as they say, the show must go on!