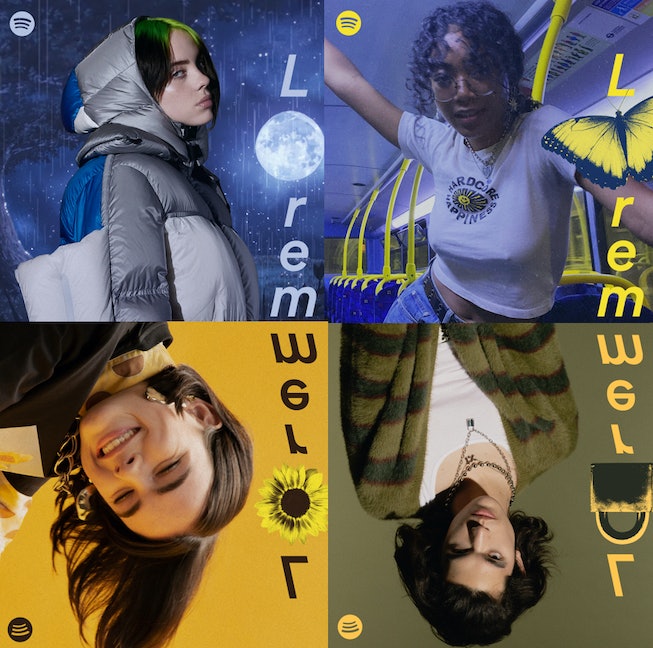 In the vast and bountiful world of Spotify playlists, there generally exists two kinds: playlists by genre, and playlists by vibe. Lorem — the quirky, and youth-centered playlist lands squarely in the latter category. It's a place where MGMT's Oracular Spectacular, Harry Styles' self-titled, and a fuzzy single from Norwegian bedroom artist girl in red can all share equal real estate simply because they're all, well, good.

Since its rebranding from Spotify’s “Left of Center” playlist at the end of June 2019, Lorem has become a somewhat loose community ground for music-minded young people. On Twitter, users align themselves with the list, and tweet about curating their vibes so they “can be the humanization of the playlists pollen and lorem on spotify.”

It all makes sense to 30-year-old editor Lizzy Szabo, who’s more-or-less is the lead curator of Lorem alongside a wider team and designer Doug Richards, the mind behind the playlists colorful design. Szabo explains that the playlist is made specifically geared toward that crowd. “I think the younger generation today is very inclusive and accepting," she says. "This is not a playlist for anyone that's taking themselves too seriously or pretentious. It's a place where you love music; there's no such thing as a guilty pleasure.”

Functionally, Lorem — along with Spotify's other premium playlists like Rap Caviar or Fresh Finds — has undeniably become a powerful marketing machine in itself in this current age of streaming. It wouldn't be much of a stretch to assume that placement on the playlist can drastically alter the course of an artist's career seemingly overnight, though how much exactly is obviously difficult to measure.

NYLON recently caught up with Szabo to learn more about Lorem behind-the-scenes, the sounds and trends that fuel it, and the diverse community that surrounds it.

Since Lorem doesn't operate within the confines of a genre, does that make your job more difficult when it comes to choosing songs for the playlist?

I think sometimes, sure. But a lot of music is kind of learned from the audience, learned what they're into, and kind of try things out a little bit more freely. I think the way that they listen to music, they're comfortable listening to something that's on Top 40 radio, and then a brand new artist, and maybe something that's a bit more nostalgic. A big classic indie pop song from the early 2000s or The Beatles, kind of these core influencers. Every week, all the editors kind of go through all the submissions that come in from artists from around the world, and anyone is able to put their music into playlist consideration, and that tool has been absolutely incredible in letting us discover new artists to test out. A year ago, artists like BENEE or Peach Tree Rascals or Gracie Abrams, were considered smaller.Peach Tree is a particular one that really came up in the playlists. BENEE, too. For BENEE it was playlist first, and I think sonically and her personality fits to a T where she's kind of perfect for Lorem, and then people kind of latched on immediately, which is so cool to experience and watch from our side. Especially knowing now how big her music has become.

Over your weeks curating, has there emerged either formally or informally some sort of guideline or checklist that you follow when you pick songs?

I think week over week, I tend to keep up with looking at pretty much every different form of social media and seeing what people are into. For Lorem in particular, it's important for its audience to come to the playlist and see something fresh every time they're experiencing it. That's why we made the description: "songs you can send to ur friend" because I can see in the data and in the tweets and all these indicators that we have to look at about the audience, they're coming in there every time they start with something new, whether it's Fleetwood Mac one week or a brand new artist. I think number one, it's keeping it fresh. Number two, there's no real checklist. A lot of these songs and a lot of these artists just have a certain vibe, whether it's upbeat or happy, dancey. But sometimes people are sad and I think a lot of these artists put out a plethora of different sounds and it's important to hit all those different feels, especially knowing the age group. Everything they're going through in their lives and in their world, it's important to have a variety of feels in the playlist.

What were some unconventional methods that you use to find new music or bands?

I still go in these deep Spotify rabbit holes, using interesting user playlist trends. I still think blogs and tastemakers are always going to be important. I think the more ways you can discover music, the better. I definitely discover music in a thousand different ways every week. But I think my favorite is going through that Spotify rabbit hole, you know, related artists, user playlists and having that "A-ha! I struck gold" moment.

Who are some of artists you've recently discovered?

First off, artists that I'm excited about, I think spill tab is incredible, Remi Wolf. It's been kind of amazing too to watch her blossom over the past year and really come out with some music that really sounds like nothing else. Claud just signed to Phoebe Bridgers' new label and excited to see what that means for them. And there's this song I've been listening to a lot this past week, and it's actually not in Lorem but is in Fresh Finds, and the artist is PawPaw Rod, and the song is called "Hit Em Where It Hurts." And it is a vibe.

Lorem has sort of taken off as a playlist, and even attracted a tight community of its own. When did you guys realize that Lorem was kind of outgrowing itself as a playlist?

We sat there for a couple months last year going over the draft and I feel like I spent forever trying to decide the sequence of the songs and really balance it out between things that were just great songs with great artists and maybe a bit of throwbacks to kind of set the vibe. And I feel like, honestly, within a week of [rebranding], it wasn't just changing the name, but changing the design — I think the design is really cool for Lorem and really stands out when you're scrolling through — we saw an uptick pretty quickly with how many people were listening. And I think a couple weeks more this Reddit thread popped up that was like, "What the hell is Lorem?" And people trying to figure it out. It was just kind of hilarious to see all these conspiracy theories pop up, but we never did any marketing around the list. I don't even remember what our initial description was. But we kind of sat back and updated it, putting different artists on the cover, artists that have what we thought, maybe not the biggest fanbases but really dedicated fanbases. Remember when Rex Orange County came on the scene and it felt like overnight he was so popular and all the teens new the words to every song? I think similar fanbases you see [that with] Mxmtoon, Conan Gray, and we really wanted to have a space for those artists. We kind of put them all together and crossed our fingers and hoped that fans would like it and that artists would like it. I talked to Mxmtoon recently and she said it was a way for her to kind of see who her peers were.

Do you see Lorem evolving into something bigger in the future — what that would even look like?

I think part of the great thing about the name, it's really not tied to anything but it's come to mean something to artists and fans. I think a lot of these artists are very open and relatable to their fans. If we can embody those principles, keep it playful, keep it honest, then I think that's Lorem in the future...maybe the artists continue to get bigger and bigger and we cycle in new artists. There's a lot of possibilities and I'm just grateful that we made something that people feel like they can relate to and that they enjoy.

Finally, if Lorem was a person, how would you describe them?

They're coming of age, they're becoming adults, they're approaching the world in a friendly, conscious, artistic, creative and inclusive way. I think as a music listener, they're also very open. In the beginning, [Lorem] featured huge artists, not just always indie, but we featured Post Malone, Harry Styles, Ariana Grande, Childish Gambino, so I think the Lorem listener would have no shame or anything listening to something super popular but also being supportive and becoming fans of someone more developing. I think a Lorem listener is caring, not pretentious. They're cool because of all of those qualities, but never too cool. They're definitely into that colorful, playful aesthetic, fashion, and self-expression but never, you know, high brow. I think if we can encompass all of that, that's our biggest goal.