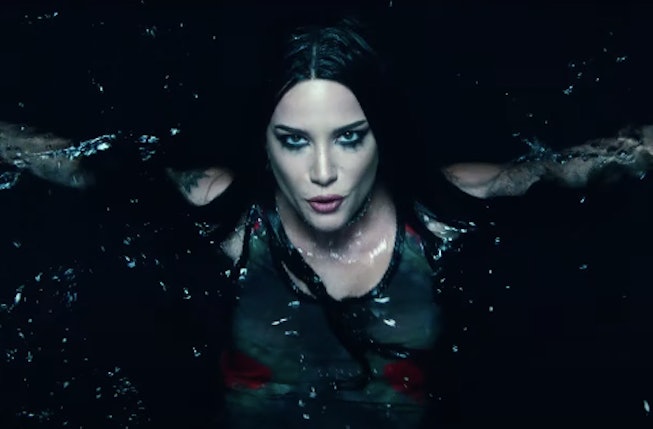 The lawless couple in Rihanna's now iconic "We Found Love" music video have officially been reincarnated as pop-punk agents of chaos in Machine Gun Kelly's visuals for his Tickets to My Downfall single, "forget me too."

The video is imbued with that unfiltered post-bender energy we know and love; Kelly thrashes around what looks like a suburban home, rips a Magic 8-Ball out of his back ("I'm gonna stay and put my key in the bag more," we know what you're playing at there...), and smashes a framed photo. Halsey then barges into the house, guns blazing, and takes out her frustration by throwing anything that comes within reach into the pool. They're in love and it hurts!

Legendary Blink-182 drummer Travis Barker — who teased a video of a carefree Kelly moshing on a table while bewildered and amused Interscope execs watched the display way back in January — makes a high-speed drumming cameo in the video as Kelly and Halsey scream their hearts out in each other's faces. Like the many bad boys before him, and like those who will absolutely follow, Kelly ends the video by dropping his bubble gum pink guitar and hopping on his motorcycle to ride away into the sunset. Watch it below.