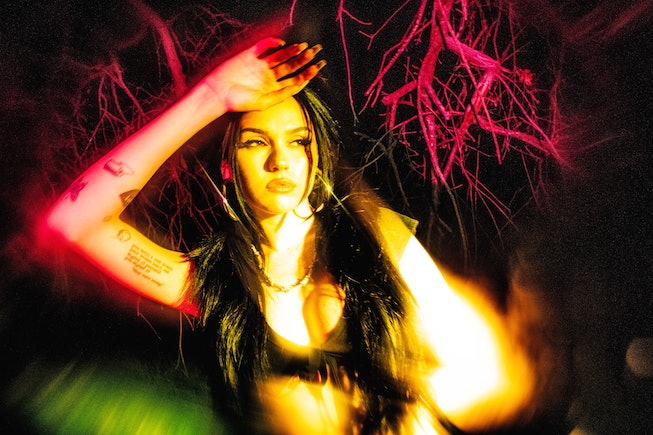 Maggie Lindemann has lived many lives — from an idolized Tumblr model to a bubblegum-pop prodigy — but the 24-year-old’s latest evolution is the most authentic.

Lindemann’s debut album, SUCKERPUNCH, out today, picks up where her unexpected EP, Paranoia, left off, but in a bigger and bolder capacity. SUCKERPUNCH is like a musical memoir, with 15 songs that reveal Lindemann's complex inner dialogue. The album’s most self-aware track, “self sabotage,” speaks to her habit of pushing people away. “break me!,” meanwhile, uses heavy metal and screamo to cope with heartbreak, while the lovelorn anthem “she knows it,” reveals Lindemann’s crush on a girl who already has a boyfriend. “I’m experimental,” Lindeman says of her new music. “I like to experiment with a lot of different things, different genres. I hope people can realize that.”

Before introducing herself as a punk artist, Lindemann’s claim to fame was the pop hit “Pretty Girl.” The song was originally written as a slower ballad and largely references her time as a Tumblr phenomenon. Lyrics like, “There’s more to me than people know,” and “I don’t let it show, but I’ve been through some shit,” invited listeners to see past her glossy social media posts. But when “Pretty Girl” was remixed into a synthesized club anthem, the song lost its emotional roots.

Lindemann was 19 when “Pretty Girl” became a chart-topping success in Europe — landing at number 4 in Sweden, number 6 in Ireland, and 8 in the United Kingdom. Though it wasn’t her preferred genre, the singer's former label, 300 Entertainment, pushed her to record more pop singles to keep up the momentum. “I was so young,” Lindemann says, reflecting on the experience. “ And being so young, and then put into something where you don’t know anything about it, you just kind of listen to what people say, and then it fucks you in the long run.”

“All that bubblegum stuff I did, now that’s out there, and that was what people first saw of me, and it’s just not who I am at all,” she says. “It’s a terrible representation of me. I just wish I was able to be who I wanted earlier on.” Lindemann eventually dropped her label and decided to release music through a distributor instead. “I think it’s been way better because I’m my own boss,” she says. “I also own my masters, and I have creative control fully, so anything I want to do creatively, I’m allowed to do.”

Lindemann’s debut record is a well-deserved celebration of her artistry. Ahead of the album’s release, she chatted with NYLON about finding confidence through songwriting, her dream collaborators, and why she wants to fine-tune her production skills.

What does this project mean to you?

What do you think you've evolved into?

Just myself, I think. I finally feel very confident in myself and my craft. I don't know, I just feel more confident than I've been, probably ever.

With Paranoia, it really felt like I came into my own. I felt very confident when I did that. Everything was perfect, the way it came out. It was actually a really easy thing for me to do. That EP was really easy to write, I never had really any writer's block or anything like that. It all came very naturally, which was a really weird thing to experience. I felt like everything just kind of completed when I did that, which gave me the confidence to then do SUCKERPUNCH.

Does SUCKERPUNCH feel like an extension of your last EP?

Yeah, I would say that. It's Paranoia but just elevated. And I try to introduce new sounds. It's still super similar but I explored more things.

I remember reading a Rolling Stone article where you called Paranoia your starting point, and said you wanted to make your next project bigger and better. Do you think you accomplished that?

Definitely. It was hard. I had so many blocks and I felt like this one was way harder to do than Paranoia was, but yeah. I definitely feel like it's an extension of that. It's just the better, longer, extended version.

Why was this one more difficult?

I don't know, I just had a harder time. I think maybe because it's a bigger body of work. You have to put a little more thought into it. 15 songs versus eight songs is a big difference. So, making it cohesive and feeling confident in every song. Wanting every song to sound different was a big thing for me, too because I tend to do a lot of similar melodies and stuff, and I like to write about a lot of the same stuff.

It's a huge shift from your bubblegum-pop era. Was that something that you knew you wanted to do from the start or did that just come over time?

When I first started, I was making alternative pop, and then when I got signed to a label is when I started doing the bubblegum stuff. “Pretty Girl’ started popping off, and obviously, as a label, they wanted to do what works and that was that. I kind of got pushed into that a little bit. I always knew I didn't want to do that. I always knew I wanted to do stuff that was a little edgier. I wanted to make alternative pop music, Melanie Martinez, BANKS-type vibe.

That's what I wanted to do originally. When I first started, pop-punk wasn't really like it is now. I started in 2014, [or] 2015, and it just wasn't what it is now. So I didn't really think that was possible, but it's what I grew up on. I love pop-punk. My whole family is metal heads, it's all they listen to. My dad loves alternative rock and my mom loves Gwen Stefani. So, it's just what I was raised on. Then I found pop-punk, and I always loved it, so, I was like, "Fuck it. I'm just going to do that."

Who were your musical inspirations growing up?

Have you tried your hand at producing?

Yeah, I produced a little bit. I'm not very good at it, but I know what I want. Producers know a lot of words that I don't know. I don't even know how to describe it.

Do you remember which song you wrote first for SUCKERPUNCH?

I think “hear me out” was one of the first songs on the album. “hear me out” and “she knows it” were the two that came from the very first writing camp I did that first week.

Do you have a favorite song on the album?

“self sabotage,” probably. I love “self sabotage.” I like all of it, but I think “elf sabotage” is the one I feel most relatable to. When I wrote that song, that was the one I was most satisfied with at the end. I was just like, "Wow, these lyrics are so neat."

Can you walk me through the lyrics?

I self-sabotage really bad with everything I do. I love to cause problems in my life. I don't know why I do it. I just can't help it sometimes, but "I start to fall, then I cave and I push you away / You could call it self-sabotage" — I always push people away. I'll start fights and do that whole thing. I love to push people so that I can feel that they care, but then I do too much, and then it pisses people off.

Do you think making music that's self-aware has helped you navigate those situations in real-time?

Yeah, I think so. Writing is literally therapy to me, so when I write it, I am able to hear it and see it from an outside [perspective]. Even though it's me, it's an outside perspective because now I'm hearing what I just said. It's like going to therapy and listening to the session.

Where do you see your career going in the next five years?

Are there any people that you're looking forward to collaborating with?

I'll make a song and then I'll kind of hear someone. The thing with Kellin Quinn was I made “how could you do this to me?”,, and then for some reason I just heard his voice on it. I thoughtis voice would sound good because of the register and the key. So, that's how I came up with that. I would love to collab with Oliver Sykes from Bring Me The Horizon. I would love to do something with Avril, Hayley Williams, or Amy Lee. There's a lot of really cool people and a lot of cool artists right now, so I would just be grateful to collab with anyone.

What do you want people to learn about you after listening to this album?