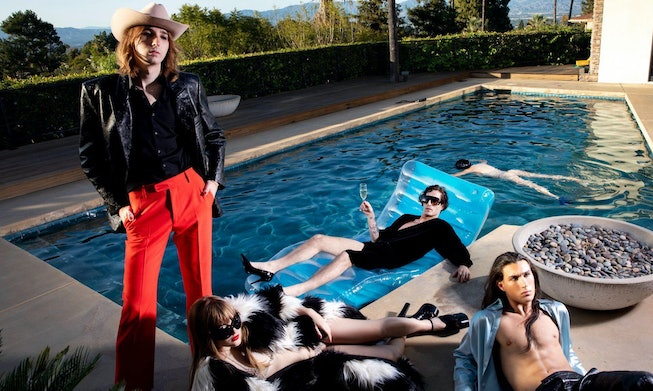 Måneskin may have just released the song of the summer. The Italian rock band who famously won Eurovision in 2021 knows how to write a catchy hit, and their latest single is no exception. The pop-rock track titled “Supermodel,” produced by Max Martin, describes an enchanting partygoer whose attention is hard to grasp. But beneath the song's catchy surface lies a warning against falling in love with someone who will not love you back.

The track opens with lead singer Damiano David’s sultry vocals as he describes the mysterious woman in question: “Alone at parties in a deadly silhouette/ She loves the cocaine/ But the cocaine don’t love her back.” David continues to set the scene and says the woman is a “‘90s supermodel,” who was once a “good Christian,” and seemingly abandoned her roots for a more exciting lifestyle. “I used to know her/ But she’s got a new best friend,” he continues. “A drag queen named The Virgin Mary takes confessions/ She’s a ‘90s supermodel.”

If the subject of the song is as interesting as she seems, it makes sense why David is so enamored by her. But by the time “Supermodel” gets to the pre-chorus, Måneskin’s message is loud and clear — do not be fooled by her charm. “Yeah, she’s a master/ My compliments,” David sings. “If you want to love her/ Just deal with that/ She’ll never love you more than money and cigarettes/ Every night’s a heartbreak.”

“Supermodel” is based off the celebrity-obsessed culture in Los Angeles, arguably the world’s epicenter of socialite and starlet idolization. In a press release, Måneskin explained that they were inspired to write the song after meeting several supermodel-esque characters during their time in the city.

“We wrote ‘Supermodel’ after spending the best few months in L.A.,” they said. “At times we were surprised yet intrigued to find how people cared so much about the idea of “celebrity” and status, obsessing over their looks and connections. We started to imagine an enigmatic Supermodel character. She is really cool, fun and social, yet in reality she is troubled, hiding sadness and addiction. In a way, you love her, because she knows how to have a good time, but you also want to avoid her, because she might get you into trouble.”

The dark side of the supermodel life really emerges on the song’s last verse, when David sings, “Alone at parties/ she’s working around the clock/ When you’re not looking/ She’s stealing your Basquiat/ Low-waisted pants on OnlyFans/ I’ll pay for that/ She’s a ‘90s supermodel.”

Before circling back to the chorus one last time David warns that no one stands a chance with her, whoever she may be. “She’ll never love you/ You look just a bit like her dad,” he jokes. Even so, the singer returns to his original plea, and sings “Hey, don’t think about it/ Hey, just let it go.” After all, she is a supermodel.