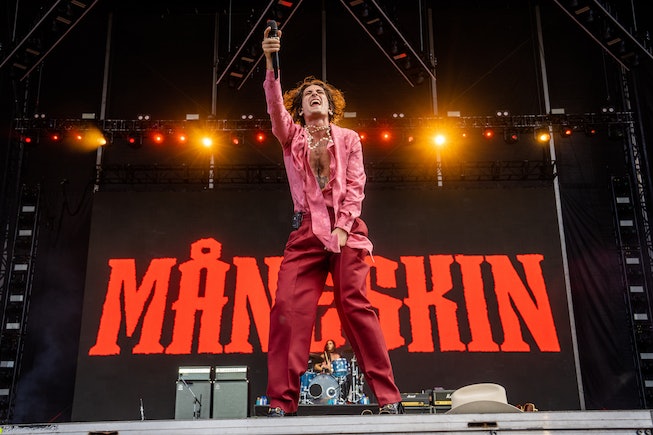 Måneskin’s world domination began when they won the 2021 Eurovision competition with their song “Zitti E Buoni.” Since then, they’ve grown into one of the most insanely popular rock bands of the 21st century. After winning Eurovision, the Italian rock band has performed on Saturday Night Live and The Tonight Show With Jimmy Fallon, they’ve won Billboard and MTV Awards, and are now embarking on an international world tour.

On August 28, 2022, the four-piece group — made up of lead singer Damiano David, bassist Victoria de Angelis, guitarist Thomas Raggi, and drummer Ethan Torchio — made their MTV VMAs debut with a bedazzling and raucous performance of their song “SUPERMODEL.” Complete with David wearing a studded collar, no shirt, and ass-less leather chaps, the performance was nothing short of iconic. With more of the U.S. finally tuning into the rock quartet, we here at NYLON thought it would be helpful to come up with a comprehensive guide for everything one could possibly want to know about Måneskin, the hottest group of the moment, including how the band got together, their previous X Factor run, and, most importantly, which of their songs you should be listening to first.

David, de Angelis, Raggi, and Torchio formed the band in 2015 in Rome, and they spent their earliest years busking in the streets and restaurants of the city.

Knowing each other from middle school and playing in bands together before, David and de Angelis recruited Raggi, another mutual middle school friend, into the band in 2015, and the three later found Torchio through an ad on Facebook called “Musician Wanted (Rome),” per the New York Times.

They entered into their first local music competition, Pulse, in 2016, and won — and the moment became a major turning point for the group (and a promising omen for what was to come). At the same time, the members landed on the name for the band, Måneskin, Danish for “moonlight,” at the suggestion of de Angelis, who is half Danish. According to Italian press, the group also wrote and released their first song, “Chosen,” for the finale of the competition.

They were runner-ups in Italy’s 2017 X Factor competition

With the Pulse win in their pocket, more trips abroad, and a renewed focus on their music, Måneskin auditioned for and competed in the 2017 edition of X Factor Italia. They quickly became a fan favorite on the show, with Italian press describing the phenomenon as an affliction affecting everyone from young people to mothers with children their age. The public couldn’t get enough of their youthful energy, sex-forward and androgynous style, and ripping rock attitude on stage, and fan clubs dedicated to the group quickly sprung up on the internet, according to the Times.

Although they didn’t win X Factor — Måneskin placed second after winner Italian singer Lorenzo Licitra — the group left the competition with other kinds of trophies; their cover of the Four Seasons’ song “Beggin,” which they performed on X Factor Italia, took off on the Italian music charts. They also formed a relationship with the Italian fashion house Etro, who began dressing the band for photo shoots and album covers — and later, for their Eurovision performances.

“What I love is the way that they mix clothes for women and men,” Etro told the Times. “There is something very revolutionary about them, the way they don’t have any fear and they have fun with clothes.”

Måneskin was a shoo-in to win Eurovision 2021

After their X Factor stint, Måneskin spent a few years releasing new music and albums, including their first full-length Il Ballo Della Vita in 2019, and embarking on their first European tour from 2018 to 2019.

In March 2021, they competed in Italy’s national Sanremo Festival for Italian Song. To many people’s surprise, they won, beating Italian stars and runner-ups Francesca Michielin and rapper Fedez; it was an unexpected victory for the group, according to Italian commentators, as rock music has never been a mainstream genre in the country. But their win at Sanremo, which also functioned as Italy’s selection process for Eurovision, propelled them to the international stage as they represented their home country at Eurovision with their song “Zitti E Buoni,” or “Shut Up & Behave.”

The track, a prowling and explosive rock anthem, along with their undeniable stage presence made Måneskin an immediate favorite to win — and they eventually did, receiving a total of 524 voting points, becoming the third Italian act to win the competition ever, and the first to claim the prize since 1990. It was huge moment for Italy and equally monumental for rock-and-roll. As Måneskin accepted their Eurovision trophy, lead singer David yelled into the mic, “We just want to say to the whole of Europe, to the whole world, rock-and-roll never dies!”

Released on March 19, 2021, Måneskin’s second studio album Teatro d’ira with its eight phenomenal songs grabbed the attention of thousands of new fans. Shortly after their second album release, the quartet rose to the top of Billboard’s Emerging Artists charts in July 2021 — undeniably because of the success of songs like “Beggin’,” “MAMMAMIA,” and “SUPERMODEL.”

In 2022, Måneskin’s performed on The Tonight Show With Jimmy Fallon for the second time. Their song “If I Can Dream” was featured in the Baz Luhrmann biopic Elvis, starring Austin Butler. And most notably, the band won Best Alternative category at the MTV VMAs for their top 100 hit “I Wanna Be Your Slave.”

So why do people love Måneskin?

Well: they’re hot. Just kidding — but also not really; after all, everyone in the band is so dang good-looking, and their physical appearance is, for better or worse, a huge selling point in the band. As one YouTube commenter remarked on the music video for their song “MAMMAMIA”: “This is literally the most attractive band to ever exist change my mind.”

That aside — there are nuances to their hotness that merits further investigation, especially regarding their unapologetically flamboyant and androgynous-leaning style as it intersects with modern-day ideas of gender fluidity and presentation. As a band, and in their music, Måneskin plays into a revival of the glam, sleazy, rockstar persona that dominated the ‘80s and ‘90s, but in a way that feels more updated politically, and not actually sleazy. Their music video “MAMMAMIA” includes couples of all races, genders, and sexualities, making out with each other to their unrelenting rock at a crowded house party — because everyone deserves a safe space to be a freak!

Måneskin is bringing rock-and-roll to an entirely new era, introducing Gen Z to hard rock behaviors seen on music icons of the 1980s. The influence of performers like Steven Tyler, Mick Jagger, David Bowie, and Freddie Mercury can be visibly and musically identified in the musicianship of lead singer Damiano David. The musicality of the band represents themes heard in the late ‘80s and early ‘90s. Just like fashion, in music, what goes around comes around. It was about time rock-and-roll received a rebirth into today’s society.

Finally, the music is actually good, with incisive songwriting that has the potential to become chantable mantras for anyone feeling like an outsider misfit. “We’re out of our minds but different from them,” goes one of the standout lines on their hit “Zitti E Buoni.” Pair that with some smoked-out eyeliner and bedazzled, black punk-rock outfits, and you’ve got the hot Italian rock band this era deserves.

Where should I start listening?

“Beggin,” the band’s 2017 cover that went viral on TikTok after their Eurovision win, is an obvious starting place. After that, we recommend diving into their own impressive catalog starting with “Zitti e Buoni,” or “Shut Up & Behave,” their winning song from Eurovision 2021. You should definitely check out another famous TikTok song of Måneskin’s, “MAMMAMIA,” for an intense rock-and-roll moment. Of course you can’t miss their latest 2022 release, “SUPERMODEL,” which they performed at the MTV VMAs.

This article was originally published on Oct. 29, 2021