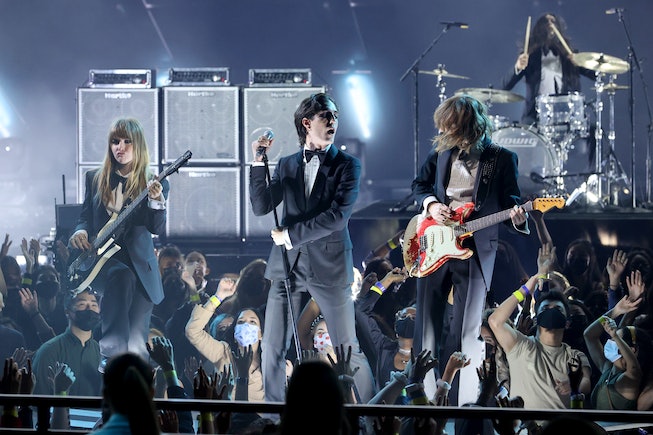 It was the Italian rock quartet’s first performance on any U.S. award show’s stage, and the group — famous for wearing leather, cut-outs, and smoked-out eyeliner — marked the occasion by cleanly suiting up in tuxes. And while it must’ve been the group’s 100+ time performing their hit cover of the Four Season’s 1964 hit, they performed like it could’ve been their first with lead-singer Damiano David even getting on his knees to sing at guitarist Thomas Raggi at one point.

Måneskin performed the same track, along with their single “MAMMAMIA,” on Fallon, but we must say the band will always shine brighter in an arena-like context. Thrashing out amidst the flailing arms of the audience at the AMAs, the group looked perfectly in their element embodying the dynamic rockstar showmanship they’ve become known to deliver. Incredibly, their live performances of “Beggin” just keep getting better.

The band was up for one award Sunday night: Favorite Trending Song for their hit cover of “Beggin’.” While they didn’t win — Megan Thee Stallion’s “Body” took the category — their nomination is still an impressive feat considering they only shot to international superstardom in May after winning the 2021 Eurovision competition.

Nonetheless group is still raking in the awards. The group took home Best Rock at the MTV European Music Awards just a few weeks ago on November 17. In a brief acceptance speech, David pointed out the significance of the moment for the group of friends: “People usually told us that we were not going to make it with our music. Well, I guess you were wrong.”

The band’s rocky journey to stardom arguably began on X Factor Italia, which they competed and placed second in during the show’s 2017 season. They gave their first performance of “Beggin’” on the show, and later included the cover in their 2017 album Chosen. Soon after their Eurovision win the song went viral on TikTok — and as they say, the rest is history.

Watch the group’s performance of “Beggin’” below.