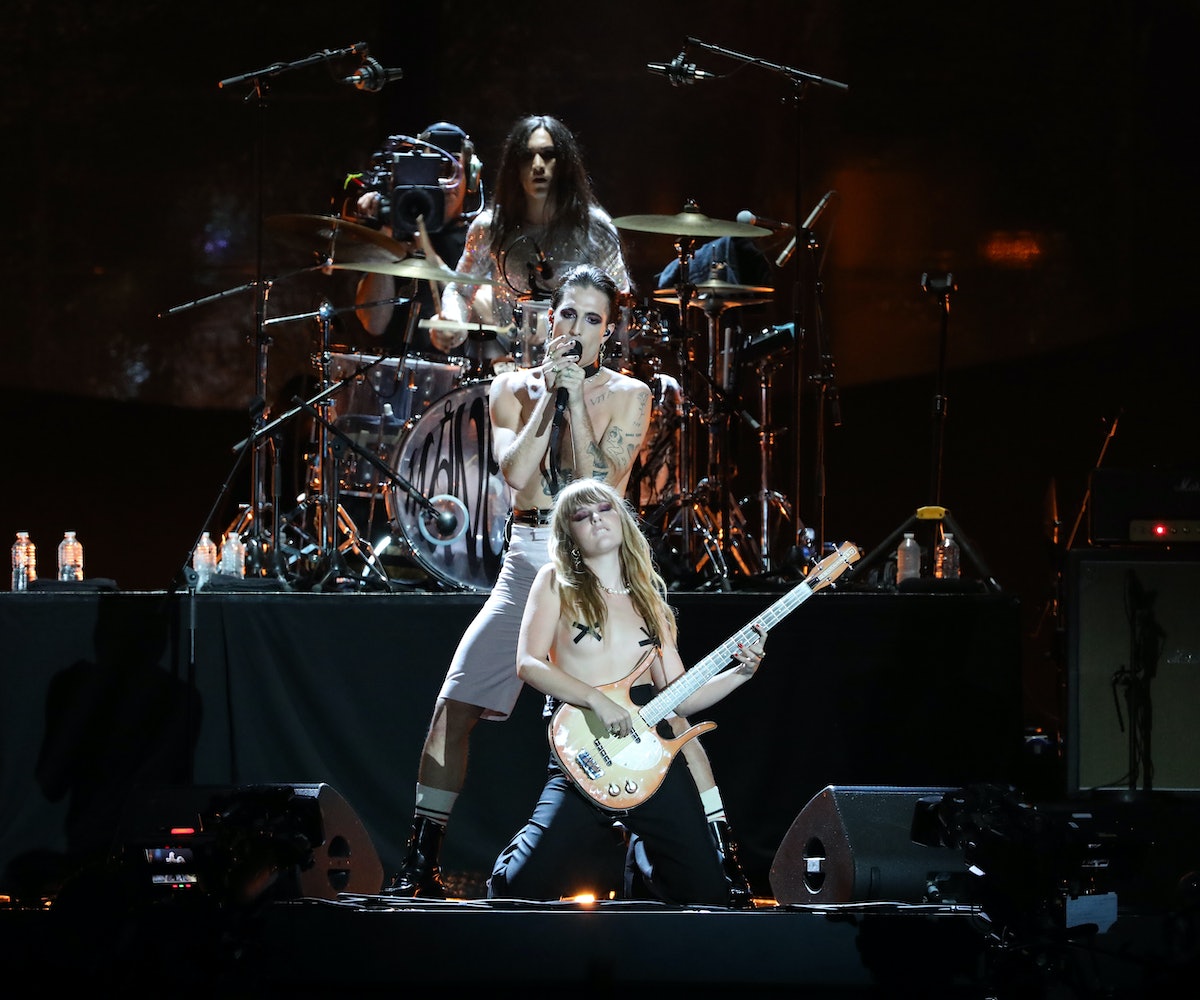 If you haven’t heard, Måneskin is the hottest rock band of the moment and maybe Italy’s biggest export since pasta and pizza. The Italian quartet won Eurovision 2021 in May 2021 and skyrocketed to international stardom, making their U.S. TV debut appearance on Jimmy Fallon this past October.

Besides all of the members being ridiculously attractive (exhibit A), the band also gives one hell of a live show. In fact, it can pretty much be said their live performances are the reason for their fame, given their humble beginnings busking in the streets in Rome, gaining national recognition through X Factor Italia, and global renown through Eurovision. Though the stages they’ve performed on have grown, the energy they’ve brought has always felt like it was bursting the seams of whichever venue they played. Even their performances from 2017 — when most of the members were all around 18 years old — contain as much verve, swagger, and charm as their ones today. Who said rock ‘n’ roll was dead?

Below, NYLON picked some of the best live performances Måneskin’s given over the course of their career, including special covers of songs from The Killers, Amy Winehouse, and more.

Before Måneskin swept Eurovision 2021, they competed in the 2017 season of X Factor Italia, blowing the judges away and quickly amassing a fervant fan following in their home country, with their energetic envelope-pushing performances. Like the above, in which frontman Damiano David, dressed in a mesh shirt and stilettos, delivers an immaculate cover of The Struts’ “Kiss This” while twirling around a pole. Is there anything he can’t do?

“I Wanna Be Your Slave,” Polsat SuperHit Festiwal 2021

Performing their 2021 single “I Wanna Be Your Slave” at Poland’s Polsat SuperHit Festiwal, the group oozed s*x appeal and charm. Then, David grabbed guitarist Thomas Raggi for a kiss and delivered a fervent message on stage that made their performance an unforgettable one: “We think that everyone should be allowed to do this without any fear. We think that everyone should be completely free to be whoever the f*ck they want. Thank you Poland! Love is never wrong!”

“Somebody Told Me” By The Killers, X Factor Italia 2017

Another standout performance from Måneskin during their X Factor Italia run was their cover of The Killers’ hit “Somebody Told Me.” With his hair slicked back and donning a suit jacket, David growls through the classic track, somehow unearthing a brand new side of the maybe-overplayed radio mainstay.

The first time Måneskin performed “Beggin,” their now-famous cover of the Four Seasons’ hit, was on X Factor Italia during the show’s second week. And though it was only their second performance, their star-power was already evident as band members ran through the audience, head-banged, and David himself strutted about the stage howling the song.

Måneskin seem to have a penchant for covers and they tackled Billie Eilish’s famously moody “Bury A Friend” at the Global Citizen Live concert in Paris earlier this year. Dedicating the song to Eilish, who was in attendance and also performing that night, the band reworked the subdued song into a thunderous punk rock anthem, complete with a totally excessive and absolutely amazing guitar solo courtesy of Raggi.

At this point, Måneskin has countless videos of them performing their massive hit “Zitti E Buoni” live. But perhaps their most pivotal performance of the song — besides their Eurovision win — is the performance that won them Italy’s annual Sanremo 2021 competition, which also finalized them as the country’s representatives for the Eurovision contest. Set in an opulent concert hall with a backing orchestra, the band, dressed in coordinating glittery black fits, brought a surge of energy to the stuffy institutional space.

At the same Sanremo competition, the band reunited with their X Factor Italia mentor, Manuel Agnelli, for a moving and powerful duet of “Amandoti,” a song by Italian band CCCP Fedeli alla linea. It seemed like it was an emotional performance for both parties as David and Agnelli sang to one another on stage, longingly. Their costumes are also great — a punk variation of decadent, frilly Victorian wear and corsets.

“Back To Black,” Rooftop Sessions

If you ever thought Damiano David’s raspy voice would sound godly singing an Amy Winehouse song, then I’ve got great news for you. He covered her hit “Back To Black” back in 2017 during an intimate rooftop live performance with the rest of the band accompanying him on acoustic guitar and, drummer Ethan, on a bench. There are no mics or anything fancy — just David belting with his raw voice while smoking a cigarette. It’s a real brilliant-genius, troubled-artist moment that Winehouse would no doubt wholeheartedly co-sign.

Performing their scorching new single “Mammamia,” Måneskin finally made the U.S. TV debut at The Tonight Show with Jimmy Fallon. It’s one of their first live performances of the track, and all the reasons why they’ve become so popular is immediately legible within the first few seconds: the glamour, the hotness(!!), the just plain talent. It really does hit different when David sings: “They ask me why I'm so hot, 'cause I'm Italiano.”