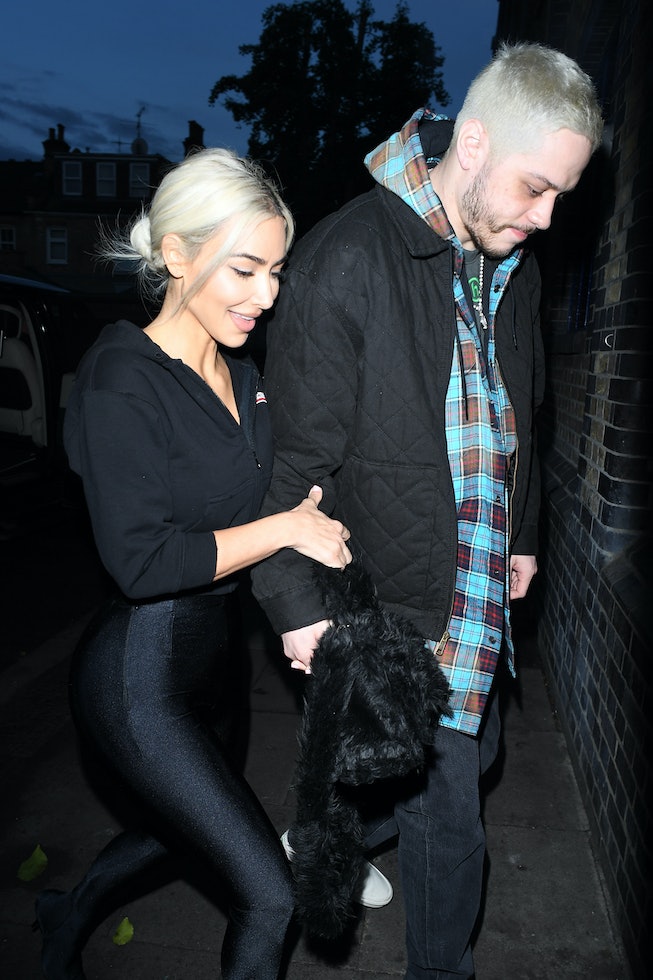 You can always count on Kim Kardashian to keep it real. The media mogul finally revealed how she and Pete Davidson started dating on the latest episode of The Kardashians, and as it turns out, their relationship started with an old-fashioned booty call.

For the uninitiated, the duo met while working together on Saturday Night Live. Back in October, the Skims founder hosted an episode of the sketch series and starred in a skit alongside Davidson. Their performance — which has over 4 million views — featured a playful kiss from the actors who were playing Aladdin and Princess Jasmine. Afterward, the reality star says she contacted the show’s producers to snag Davidson's phone number.

“A few days later I called the producer of SNL and was like, ‘Hey, do you have Pete’s number,’ and they were like, ‘Yeah,’” she explained. “I wasn’t even thinking like, ‘Oh my god I’m going to be in a relationship with him,’” she continued, “I was just thinking like, ‘I heard about his BDE, need to get out there,” she joked. “I was basically DTF.’”

Apparently, Davidson was too. The reality star also revealed that he tried contacting her months before she initially reached out. “After we got together, Megan Fox texted me and was like, ‘Is this shit for real? Because he asked me for your number months ago and I was like, ‘There’s a better shot of me and MGK getting eaten by crocodiles than you ever getting her number. Never going to happen,’” she explained.

As they say — where there’s a will, there’s a way. Despite everyone's suspicions, the couple has been together for over six months and isn’t showing signs of slowing down anytime soon. Davidson has gotten multiple tattoos for his new girlfriend, including one that says “my girl is a lawyer.” Meanwhile, Kardashian hard launched their relationship on Instagram with a series of PDA-filled photos.

According to a source obtained by InStyle, the Kardashian-Jenner family “just loves” having Davidson around. The comedian seems to have gotten everyone’s stamp of approval, except for Kardashian’s ex-husband Kanye, who has repeatedly bashed the couple online, and almost exclusively refers to Davidson as “Skeet.”

The couple isn’t letting any negativity get to them, though. Most recently, they were seen walking hand-in-hand while sporting matching bleach-blonde hairstyles. If that isn’t love, I don’t know what is.

NEXT UP
A Night Out
A Night Out With Rachel Bilson
Culture
Phoebe Dynevor Will Not Return for Bridgerton Season 3
Culture
Netflix Is Seriously Cracking Down On Sharing Passwords
Culture
6 Shows To Binge Once You've Finished 'The White Lotus'
Style + Culture, delivered straight to your inbox.