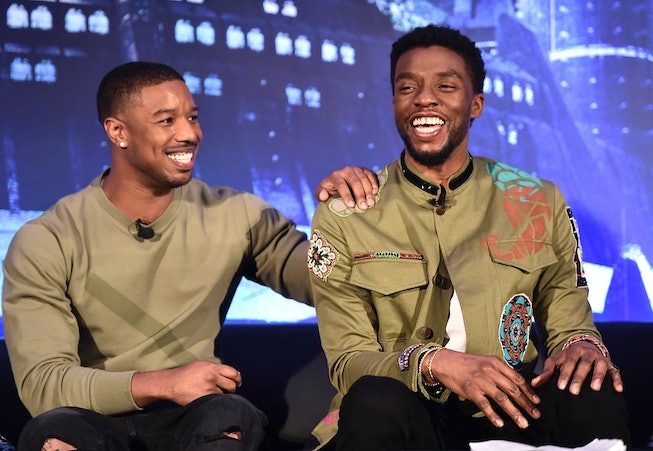 Michael B. Jordan and Chadwick Boseman may have been on-screen superhero enemies, but when the cameras were off their bond was a true friendship. As the world mourns the sudden and tragic loss of Boseman, who died at age 43 on August 28, Jordan paid touching and emotional tribute to his former co-star and friend.

In a message posted to Instagram, Jordan opened with saying how he's been reflecting on all the moments he shared with Boseman. "I wish we had more time," he wrote over and over. Jordan explained that Boseman had told him the two were "forever linked" and that those words meant more to him now than ever before. Prior to their Black Panther days, Boseman and Jordan starred on the soap opera All My Children in the role of Reggie Porter; Boseman originally had the role, but was fired from the job after complaining about the character's racist stereotypes. As reported by Teen Vogue, the All My Children writers eventually took some of Chadwick’s feedback and rewrote the part that Michael came to play.

"Everything you’ve given the world … the legends and heroes that you’ve shown us we are … will live on forever," said Jordan. "But the thing that hurts the most is that I now understand how much of a legend and hero YOU are." Jordan called Boseman his big brother, and lamented all the things that were left unsaid: "I never fully got a chance to tell you, or to truly give you your flowers while you were here."

Read the full message below.

I’ve been trying to find the words, but nothing comes close to how I feel. I’ve been reflecting on every moment, every conversation, every laugh, every disagreement, every hug…everything.

One of the last times we spoke, you said we were forever linked , and now the truth of that means more to me than ever. Since nearly the beginning of my career, starting with All My Children when I was 16 years old you paved the way for me. You showed me how to be better, honor purpose, and create legacy. And whether you’ve known it or not…I’ve been watching, learning and constantly motivated by your greatness.

Everything you’ve given the world … the legends and heroes that you’ve shown us we are … will live on forever. But the thing that hurts the most is that I now understand how much of a legend and hero YOU are. Through it all, you never lost sight of what you loved most. You cared about your family , your friends, your craft, your spirit. You cared about the kids, the community, our culture and humanity. You cared about me. You are my big brother, but I never fully got a chance to tell you, or to truly give you your flowers while you were here.

I'm more aware now than ever that time is short with people we love and admire. I’m gonna miss your honesty, your generosity, your sense of humor, and incredible gifts. I’ll miss the gift of sharing space with you in scenes. I’m dedicating the rest of my days to live the way you did. With grace, courage, and no regrets. “Is this your king!?” Yes . he . is! Rest In Power Brother.

NEXT UP
Entertainment
Meet Andreas Metaxa, The Man Behind The Miami Jet-Setting Memes Of Supersnake
Fashion
Meet The Depop Seller Making Belts Out of Tiny Bonne Maman Jars
Entertainment
Emma Chamberlain Is Officially Moving to Spotify On February 23 (Exclusive)
Entertainment
19 Niche Music Festivals For Every Type Of Person
Style + Culture, delivered straight to your inbox.