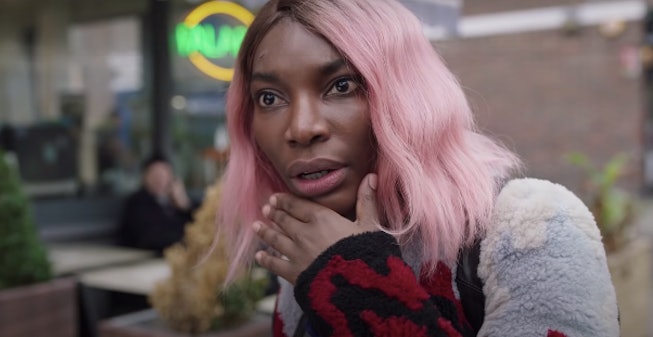 In 2016, rising British star Michaela Coel won a BAFTA Award for her hilarious performance in Chewing Gum, a sex-positive comedy about a virgin named Tracey that also happened to be created and written by its star, Coel herself. Since then, the actress has gone on to star in several more Netflix productions — like legal drama series Black Earth Rising and romantic musical Been So Long — but she hasn't taken the reigns on a new series since Chewing Gum's second and final season ended in 2017. Until now, that is. Next month, Coel will take her talents over to HBO for I May Destroy You, her next self-created, self-written, self-starring production. And today, the upcoming dramedy received its first official trailer.

A somewhat darker series than Chewing Gum, I May Destroy You will probe issues of sexual assault and date-rape through the story of Arabella (Coel), a London-based writer whose life seems to be perfect until she realizes that she may have been assaulted and not even remember it. According to the trailer, Arabella finds this out after several people point out some strange things: while smoking weed and watching TV, one friend points out a mysterious cut on her forehead; while walking down the street, another friend asks how she smashed her phone screen. In both cases, Arabella has no real clue. The uncertainty surrounding these inexplicable circumstances eventually leads Arabella on a journey towards discovering what happened.

Or, as the HBO logline reads, "Set in London, where gratification is only an app away, the story centers on Arabella (Michaela Coel), a carefree, self-assured Londoner with a group of great friends, a boyfriend in Italy, and a burgeoning writing career. But when her drink is spiked, she must question and rebuild every element of her life."

(Best of all, the trailer promises lots of fun clothes and wigs.)

Check out the trailer for I May Destroy You below. The half-hour dramedy premieres June 7th on HBO.