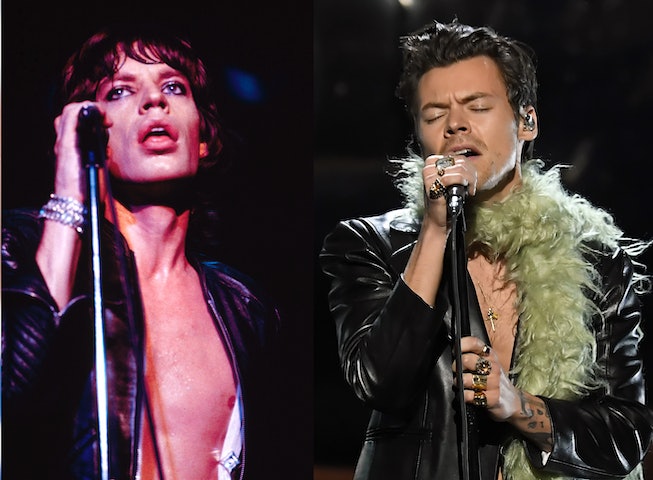 Mick Jagger is tired of being compared to Harry Styles. Though both singers have a similar career trajectory as former band members turned solo artists, and bare a striking resemblance, the Rolling Stones founder insists they are not alike.

Jagger recently told The Sunday Times that he enjoys Styles’ music but doesn’t understand why people compare him to the former One Direction star. “I mean, I used to wear a lot more eye makeup than him,” he said. The two singers are often linked due to their similar features and performance style. As many fans and media outlets have pointed out, Styles’ dark brown hair, bushy brows, sharp jawline, and flamboyant dance moves remind them of a young Jagger.

Even so, the 78-year-old rock star insists they present themselves differently. “Come on, I was much more androgynous,” Jagger continued. “He doesn’t have a voice like mine or move on stage like me. He just has a superficial resemblance to my younger self, which is fine — he can’t help that.”

Styles has admitted to being a fan of Jaggers in the past, and said he drew inspiration from the singer. In 2019 Styles even impersonated Jagger in a sketch for Saturday Night Live. However, he’s still managed to craft his own career that’s entirely unique. Since leaving One Direction in 2015, he’s released three solo albums, the latest being Harry’s House which dropped on Friday, May 20th.

The “As It Was” singer has yet to comment on Jagger’s interview, but perhaps he’s too busy to tap in on the conversation. This summer Style’s will perform a 10-night concert series at New Yorks Madison Square Garden to promote his latest record.

Fans can grab presale tickets on Tuesday, May 24th through TicketMaster.