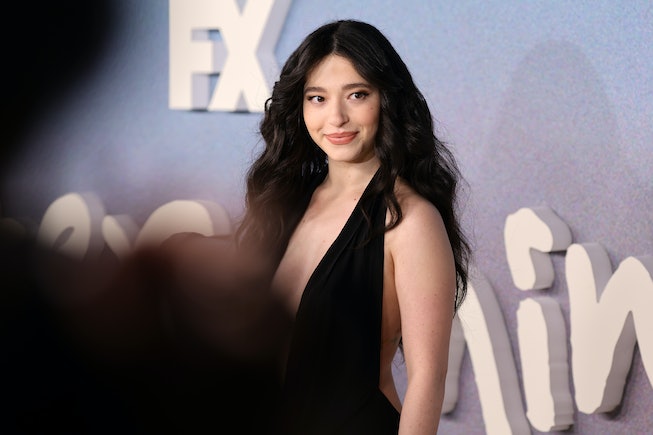 At the top of the year, Mikey Madison joined the echelons of iconic scream queens with her turn in 2022’s Scream, alongside fellow next-gen Hollywood stars including Jenna Ortega, Dylan Minnette, Jasmin Savoy Brown, and Mason Gooding. “I was so shocked when I was told about the box office numbers,” Madison says now. “I knew that people loved the franchise, but I think because I'm not on social media, I'm really disconnected from hearing people's perspectives on it. I'm so happy that people like it and that makes me feel incredibly happy and lucky that I was able to be a part of something that was so beloved.”

Even at 22, Madison is not unfamiliar with being part of a beloved pop culture phenomenon: for the past 6 years, she’s starred on FX’s hit series Better Things as Max, creator and co-star Pamela Adlon’s eldest daughter. “Better Things was like my college,” she says. “It was my college experience, it was my film school, and my acting school.”

Now, the series is coming to an end, with the final season premiering last week. For Madison, it’s a bittersweet moment: a major chapter of her life closing, while another, still unknown, begins. “For seven years I was totally dedicated to the show. I really hope to continue my career in film, and to do things that scare me or things that I haven't done before,” she continues. “I'm doing a lot of thinking about what I want to do next. But I’m mostly just trying to savor the last moments of Better Things.”

Here, the actress says goodbye to the role that grew up with her.

We’re talking just days before the final season premieres. Is it still weird to hear the words ‘final season’ said out loud?

I really tried to compartmentalize that while we were filming. I started the show when I was 15 and a half and I'll be 23 soon. My entire career as an actor, I've been on the show. I don't really know life without it. I'm really kind of heartbroken that it's ending, but also excited for the other opportunity that it might allow from.

Let’s start from the beginning. Do you remember how the show first came to you?

It was one of my first auditions. It was right around when I started acting, and I got the audition. I remember my parents were really big fans of the creative team, so they were excited for me and for this audition. I fell in love with Pamela when I met her and think we had great chemistry. I honestly feel like I just got incredibly lucky that this was one of my first jobs and that it's been going on for so long.

I met Pamela for a chemistry read and we probably worked together for about an hour. It was really fun, easygoing energy. I was really excited about the opportunity of possibly working together, but I also was trying to not get my hopes up. So my mom kept telling me, she's like, "You're probably not going to get it, so just make the most of it." And that's what I tried to do. Then, a few weeks later, Pamela called my mom to ask if I could be on the show.

That is very cute!

So cute. And then she called me, and I don't think I've ever felt that kind of joy before. It just completely encompassed my whole body, because it was a dream of mine to be on a TV show. I just didn't know that that was ever something that was going to happen for me. I literally jumped up on my bed. I was so excited.

What was your experience shooting that first season, and your first big television role?

I tried to put all of my energy into it and really commit myself to the role as much as I possibly could. I also tried to soak everything up in all of the experiences, because I didn't know if we were going to get another season or if it was going to be my last job. I was just really excited to be there and grateful.

When did you realize that not only were you getting more seasons, but that the show was a hit?

I don't know if that's ever something I was really super aware of. I think I knew that people liked it, because when I would go out with my mom, people would come up to me and say that they liked the show. But otherwise, I was sort of protected from knowing that.

You’ve grown up with the show, as has your character Max. How did that affect you and your own transition into adulthood, all while depicting someone else doing the same thing?

I remember reading the audition and being so shocked at how she treated her mom. My mom has been my best friend. I was trying to understand why Max would be taking out her emotions and so much anger on her mom. Sometimes when you're upset or when you're confused, you take things out on those that are closest to you. And that's definitely what Max did. But, especially this season, I think she's making these really important life choices that really dictate how her future is going to go. And that forcefully catapults her into this position of adulthood and an understanding of her mother and a different relationship than they had before.

How was this season different than the others, knowing it was the last one?

We knew that it was the last season, so there was that understanding, whereas before we didn't know if it was going to be the last or if we were going to get another. I think I've approached all of the seasons the same, just trying to really throw myself into the character and give as much as myself to the show and to Pamela as I could. I am really happy with how Max wrapped up the last season and sort when we're able to leave her. I'm happy with that, because I think it really shows that she is on her way to finding out who she is.

I'm definitely going to miss seeing Hannah and Olivia and not have that privilege of watching them turn into these really incredible young women. A few weeks ago, I saw Pamela doing ADR and I completely broke down in tears. I try to not be emotional around her. I don't know if she likes that a lot, but I'm a very emotional person. So I just broke down in tears. I was like, "I can't believe that this is the end." She gave me a really great gift with this show.