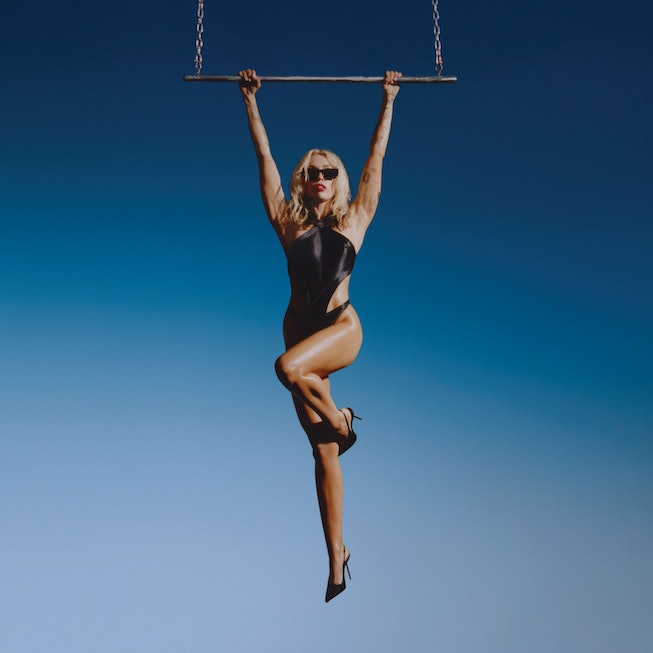 After several weeks of teasing, the “Wrecking Ball” singer has announced her eighth studio record Endless Summer Vacation, an album that she calling her “love letter to L.A.,” per a press release. The lead single, “Flowers,” is due out on Jan. 13, and the project as a whole is already being teased as a rebirth and optimistic new era for the singer, and perhaps finally marking a close to her “Malibu” (and Liam Hemsworth-tied) chapter. Good riddance!

With its glamorous sun-drenched imagery, the forthcoming album is a marked shift from Cyrus’ last project, 2020’s disco and rock inflected Plastic Hearts. Details for the new record are still scarce, but Cyrus did reunite with Bangerz producer Mike WiLL Made-It for the album, which has only fueled fan speculation that Endless Summer Vacation could be Bangerz 2.0, sonics-wise — which we definitely aren’t complaining about.

Either way, with the album expected to arrive in March 2023, we’ll find out for sure soon enough. Below, see everything to know about Miley Cyrus’ Endless Summer Vacation, including its release date, tracklist, trailer, and more.

When is Endless Summer Vacation being released?

Endless Summer Vacation is out March 10, 2023 via Columbia Records. Pre-order the album now.

What songs are on Endless Summer Vacation?

Miley Cyrus has announced “Flowers” as the record’s lead single, to be released on Jan. 13 (also ex-husband Liam Hemsworth’s birthday).

On Dec. 31, the singer shared two brief teasers for the song in which you can hear her breathily singing the lyric, “I can love me better,” a capella, seemingly suggesting the track to be a sort of self-love anthem (which might add even more significance to its release date). The videos show clips of her walking and dancing in various parts of residential L.A. while dressed in a shiny gold dress. Bangerz 2.0 incoming?

The album’s full tracklist has yet to be announced.

Who is featured on Endless Summer Vacation?

Cyrus worked with producers Kid Harpoon, Greg Kurstin, Tyler Johnson, and reunited with Bangerz-era producer Mike WiLL Made-It for the record, per a press release. It was recorded in Los Angeles.

Other guest features for the album have yet to be announced but there’s a strong likelihood Rae Sremmurd’s Swae Lee and Slim Jxmmi will be involved. The brothers have been pictured in the studio together with Cyrus and Mike WiLL Made-It, which we can only hope to mean that a sequel to 2019’s “Party Up The Street” is on the way.

What are the themes of Endless Summer Vacation?

A press release describes Cyrus’ new album as her “love letter to L.A,” with the music and imagery of the record serving “as a reflection of the strength she’s found in focusing on both her physical and mental well-being.”

In the official album trailer, amid dreamy shots of palm trees, sunsets, and Cyrus lounging poolside, the singer recites a poem that seems to further reflect the free-flowing West Coast spirit of the record:

“We met each other on the neon dinghy,” she says. “Past the manta rays and palm trees, glowing creatures beamed down from great heights. Electric eels in red venom. In the sky, we could see the riders on horseback, on comets coming toward us kicking up with laughter. My friend Big Twitchy rode the boat into the light, surfed the north break. We danced until there was nothing left. Just me and twitchy. ‘Cause that’s all we knew.”

Judging by the teasers for lead single “Flowers” as well as the slogan “New Year, New Miley” the singer has splashed across her social media, themes of self-reliance, self-love, and rebirth will also likely be explored on the record.

As you’ll remember, the singer officially split with ex-husband Hemsworth in 2019. Cyrus has since been tied to guitarist and musician Maxx Morando, a relationship one insider has described to E! News as “very serious” and “low-key.” No doubt it’s also provided a well of inspiration for the “Wrecking Ball” singer.